Have you ever heard about Wabi-Sabi? That positive feeling with a note of nostalgia, the transience of things and its acceptance, a beauty a bit decadent… For me, the Tokyo Tower, the tower symbol of Tokyo, now surrounded by skyscrapers that overlook it, is the perfect description of this basic concept of aesthetics and the Japanese world.

The Tokyo Tower, built as a panoramic tower and antenna for telecommunications, is now obsolete and although it is the second tallest tower in Japan after the new Sky Tree, it is now surrounded by taller skyscrapers with which plays hide and seek thrilling the tourist that sees it fleeting while walking around the city.

I’ve decided to guide you in the discovering of the different areas of Tokyo, telling you the main attractions that you can enjoy, and I decided to start from here, from Tokyo Tower and surroundings, an area that is often almost forgotten, crushed between the ancient charm of Asakusa, the crowd of Shibuya, the thousand lights of Shinjuku or the architecture of Ginza and Marunouchi.

Tokyo Tower, what to visit in the nearby

Now for me, and a lot of Japanese friends, the symbol of Tokyo is the Tokyo Tower, this Japanese Tour Eiffel, colored in national colors that stands so proud, in a labyrinth of mirrored skyscrapers. But I admit that the first time I was at the bottom of Tokyo Tower was not during my first trip to Japan. Not even in the second and third. But it was only after moved here!

Erroneously I was thinking at Tokyo Tower as an obsolete structure, in an area with few tourist attractions only surrounded by offices….moreover my first trip to Japan was in 2013, when the Sky Tree was the amazing news of Tokyo, so I not included iin my travel plansojn. But when I saw it among the buildings, from the terrace of the Roppingi Hills, something clicked in me and the desire to get closer to it grew stronger and stronger.

For a series of coincidences, however, our meeting didn’t happen even during the other trips and when finally, 4 years later, I decided to spend the lunch break in its presence instead of coming back home, the Tokyo Tower had become something mystical for me!

The Tokyo Tower is beautiful even in the night, always lighted and often enriched with plays of lights or special illuminations, which make it even more magical.

I don’t recommend the climb to the observatory, although I didn’t try it in person, either because the view is actually obscured by the sourrounding buildings, and because the real attraction of the Tokyo Tower is the tower itself and recognize it in a megalopolis like Tokyo is the best score… if you’re on it, certainly you miss the emotion of identifying it!! Enter, however, to be welcomed in a circus atmpshpere, mixed by classic Japanese entertainment: aquarium, animation gadget shop, theme cafes, souvenir shops and restaurants. Inside the Tokyo Tower there is also the One Piece Tokyo Tower, a kind of One Piece Theme Park, the famous anime / manga.

The image of this temple with the Tokyo Tower behind it is one of Tokyo’s most classic images. But this temple doesn’t deserve a visit just to take this picture, becuse the Zojoji Temple is also a very important Buddhist temple where even today the young monks come to study. The temple was also one of the largest and most important during the Edo period and was also much loved by the Tokugawa family, basically the founders of Tokyo, to whom a mausoleum is also dedicated inside the Temple.

Although the Zojoji Temple was noticeably damaged during the Second World War and the current temple occupies much less space than the original, it still retains that solemn aspect that still makes it the scene of important celebrations and religious events, such as the Satsubun, the ceremony of throwing beans against the evil spirits of early spring. His big red main door is still the original of 1622 and is an important cultural asset of Japan, as well as many of the statues and paintings inside the temple.

On the side of the temple there is also the garden dedicated to the Jizo, the statues of children never born or died prematurely: a series of small stone statues covered with little bibs and red hats that can be bought at the temple and put on the little Jizo as a sign of protection. There is no shortage of pinwheels, toys and food offered to these protective deities, which contribute to the moving sweetness of the place.

The Shiba Koen, or Shiba Park, is a quiet green area right next to the Zojoji Temple.
It is a green area with free access, very popular among locals, where you can stroll around flowerbeds, enter in a forest where there is a small shrine dedicated to Inari or sit in the grass and admire the Tokyo Tower.
It is the ideal place to rest a little and maybe have a quick packed lunch (remember that you can’t eat in the streets in Japan), before continuing to explore things to see around the Tokyo Tower.

Stay in the area of Tokyo Tower, going towards Tokyo Bay and Hamamastucho station, we find two of Tokyo’s 9 metropolitan gardens: the Hama-Rikyu and the Shibarikyu. The latter in my opinion is not so interesting and I don’t feel like putting them among the things to see in this area. The Hama-Rikyu Gardens instead are one of the oldest gardens in Tokyo, were the private gardens of the Tokugawa family and were opened to the public in 1946.

It is a typical traditional Japanese garden, in contrast to the skyscrapers that surround it.
Built on a former swamp land where duck hunting was practiced, it is still today the scene of some traditional hunting demonstrations with the falcon, although I have not yet managed to understand exactly WHEN.
It is a very pleasant park to visit all year round and in the tea house in the middle of the pond it is possible to drink matcha, served in a very similar way to the traditional one. In October it is possible to attend the tea ceremony for 300 yen, but places are limited and it is a good idea to go to the entrance early in the morning to make sure. 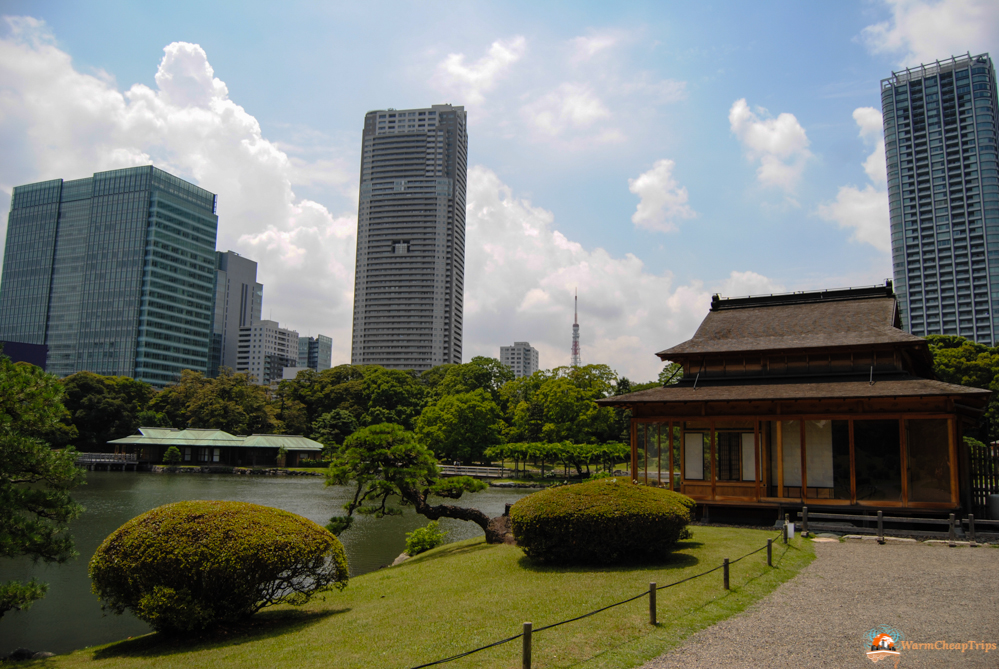 If you want to see the Tokyo Bay from a different perspective, you have to go to the Hinoide Pier and take one of the ferries to Odaiba or Asakusa or better enjoy a mini-cruise in Tokyo Bay.

From this port, just over two kilometers from Tokyo Tower, there are several mini-cruises that offer different entertainments and itineraries. Most also provide meals on board, both buffet and set menu and have a duration ranging from 50 minutes to 2 and a half hours.
Also the type of boat is very different: from classical to folk, including the “Samurai ship”.

I opted for the afternoon Symphony Cruise mini-cruise, with tea and cakes served in one of the restaurant’s rooms and final musical performance. The mini-cruise in the Bay of Tokyo is a moment of relaxa while you admire the buildings of Odaiba from a new perspective, you slip on the water passing under the Rainbow Bridge and ends up seeing the Tokyo Tower among the skyscrapers, before retraining at the Hinoide Pier.

Costs depending on the company, the duration of the mini-cruise and the catering service chosen (you can also opt for the “cruise only” option), the 50-minute afternoon cruise with tea and cakes costs 2600yen and leaves at 15.00.

This huge and bizarre clock is an unmissable stop for all Miyazaki fans, the founder of Studio Ghibli, and it will be a pleasant stop for the simple curious.
The Shimbashi clock has indeed been designed by Miyazaki himself and his style is absolutely recognizable. The construction of this work required over 4 years of work and was built by Shachimaru Kunio, the sculptor who also created the Laputa Robot on the roof of the Ghibli Museum in Mitaka. The huge clock is full of details and details taken from Howl’s Castle and four times a day (5 in the week) the clock comes alive and the mechanisms move for about 3 minutes before the stroke of 12-15-18 and 20 (even at 10am on weekends).
Still I have not had the opportunity to witness the show, but also from “still” the Ghibli Clock amazes even those who, like me, are not a fan of the genre.

Around Tokyo Tower there are many excellent accommodations and hotels with various price ranges.
I have been able to explore this area further on the occasion of the nights spent hosted by Shiba Park Hotel and I absolutely recommend it.

The Shiba Park Hotel has two buildings, the Annex, created 70 years ago, with the elegant bar, the Japanese restaurant and the Chinese restaurant in an older hotel in Japan, and the new 151 born from a couple of years, which houses the reception, the Grill House restaurant where in the morning you can enjoy the abundant international buffet breakfast and the Sakura Cultural Saloon.

The Comfort Twin Room is absolutely spacious, unlike many hotels in Japan, with enough space for luggage and clothing. The absolutely fantastic thing for me was the mirror in the bathroom, which does not tarnish in the central part, allowing you to even mirror yourself also after the shower! Yukata, slippers, personal care items and tea/coffee making facilities are available in every room, while water-dispensers, microwaves, iron, and coin-operated washers/dryers are available in the building.

Breakfast tickets can be purchased at the hotel and cost 2731yen. The breakfast is undoubtedly rich, with Japanese and international dishes. I recommend you to have a Japanese breakfast with cooked salmon, rice and miso soup, but you will also find several cooking of eggs, bacon, pancakes, salads, fruit and cereals.

On the second floor of Building 151, there is the Sakura Cultural Saloon, where cultural workshops are organized every morning. I participated in the lesson of Furoshiki, or the art of “packing” things with Japanese cloth, and I personalized my Maneki Neko, the lucky cat. I also had the opportunity to try a preview of the lesson of Mizuhiki, the art of the bows with the paper threads, which will start next winter!
The cultural experiences of the Sakura Saloon are truly an added value of Shiba Park Hotel, because they allow you to approach the Japanese culture accompanied by the teacher’s explanations in English, which in addition to guide you step by step, also tells anecdotes and explanations related to the art that you learning. The cultural experiences of the Sakura Exhibition are reserved for guests and it is possible to register until the evening before paying a small extra, at the time of check-in you will be given the calendar with the monthly schedule.

5 Cultural Experiences to try in Tokyo

And if you want to stay in this hotel, for overnight stays until March 31st 2019 you can use the DISCOUNT CODE that I got for you: you will have a small reduction on the price and a breakfast ticket for free! Simply enter the code MICHESAN when you book through their site.

Kyoto in one day, perfect itinerary to the main spot

Tour in Fukushima, see the reality 7 years after the accident