Among the many Japanese rites of the beginning of the year, such as the Hatsumode, the first visit of the year to the Shrine to pray for luck in the new year, there is also the Shichifujukin Meguri, or the pilgrimage of the 7 lucky gods. This pilgrimage is usually done in the first seven days of the year and the temples of the circuit are all within a short distance, thus allowing you to complete the pilgrimage in half a day.

Although the Schichifukujin Meguri is a propitiatory rite for the beginning of the year, several pilgrimages, especially those that include major temples, such as the 7 lucky gods pilgrimage in Asakusa (Tokyo), remain active throughout the year. Being more than a religious rite, a porpitiatory rite linked to luck, the Schichifukujin Meguri is open to everyone, including tourists.

The shichifukujin, or 7 gods of fortune, actually come from different religions and countries, are often represented on a boat and were originally worshiped by merchants.

The temples and shrines dedicated to them are almost everywhere and it is custom to go around to pray all seven, especially during the first week of the year. In Tokyo, you can choose from more than eight different pilgrimages and it can be an interesting experience for those who, like myself, want to collect the particular stamp.

Among the 7 gods of fortune, the only Japanese deity is Ebisu, god of fishermen, traders and farmers, and is prayed for good luck in business. Daikokuten hails from India and is the god of wealth. Also of Hindu origins Bishamonten, the warrior who brings courage and dignity. Benzaiten is the only woman in the group and although she too has Hindu origins, she is one of the most revered deities in Japanese shrines. She is the protector of the arts and beauty, for this reason she is especially loved by artists and musicians. From Taoism instead we have the elder Fukurokujo with the long head, which contains the given knowledge of longevity. Elder and Taoist also Jurouijn, god of long life and happiness. The last deity is Hotei, also from China, who is the bringer of happiness. 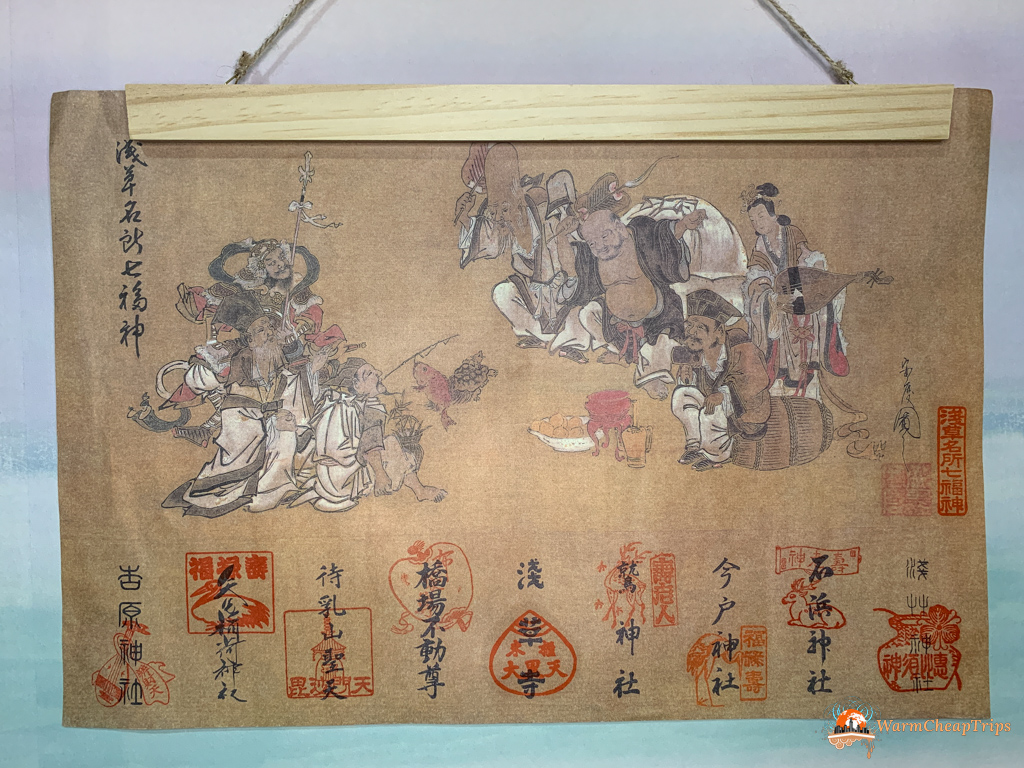 In Tokyo there are 9 different pilgrimages of the 7 gods of luck, I have chosen to do the Schichifukujin Meguri in Asakusa, where the pilgrimage remains open all year round, thus making it accessible even to those who visit Japan in a period other than the New Year.

In Asakusa the temples and shrines dedicated to the 7 Fortune Gods are actually 9, with two shrines dedicated to Fukurokujo and two to Juroujin, probably because the shrines were already present in the area before this practice spread from the end of the 18th century, and it would have been rude to exclude one in favor of the other.

The whole pilgrimage takes just over a couple of hours of walking and being circular, it is possible to start from any temple of your choice, but for simplicity I recommend starting from Sensoji, where the divinity Daikokuten is located, which surely you will have included in your Tokyo itinerary.
To start your stamp collection, you have to go to the building on the left of the main hall of Sensoji and there, together with the one you decide to collect (see the dedicated paragraph below), you’ll receive the map in English with the other temples and shrines.
The second stop is the Asakusa Shrine, on the opposite side of the main building, dedicated to Ebisu.

A 10-15 minute walk along the Sumida Park will take you to the Bishamonten temple, the Matsuchiyama Shoden, the temple of the daikon (a Japanese tuber) where there is also the shortest funicular in Japan, free and complete with an intermediate stop!

A few steps and we arrive at Imado Jinja, known for being the birthplace of one of the various legends about the birth of the maneki neko as a lucky charm and a famous sanctuary where to pray for requests for engagement and happy marriage. This is one of the two shrines dedicated to Fukurokujo.

A little further away, about 20 minutes walk, the small Hashiba Fudoson where to pray Hotei and the Hishiama Shrine with one of the two temples dedicated to Juroujin. A café has also recently been opened here, where I recommend taking a break before taking the next 30 minutes that separate you from the next stop. In the area around these two sanctuaries there is not much, and even the road to get here does not offer particularly interesting views, so if you prefer to save your energy, you could take a taxi.

We then arrive in the red light district of ancient Edo, where we find the Yoshiwara Shrine dedicated to the goddess Benzaiten, who was also identified here as the protector of women who worked here as prostitutes. I recommend that you also stop at the nearest small sanctuary located a little further on, where you can admire a beautiful mural representing the goddess of the arts.

In the area we also find the Ootori Jinja, where the most important Tori-no-ichi festival takes place in November, in which decorative racks are purchased to hang in homes and activities to ensure the protection of the building for the year to to come. Ootori Jinja is the second sanctuary dedicated to Juroujin.

The last stop is about twenty minutes along Kappabashi, the “kitchenware town” of Tokyo where you can buy everything you need for cooking and for your restaurant, and is the Yasaki Inari Shrine, the second dedicated to Fukurokujo. 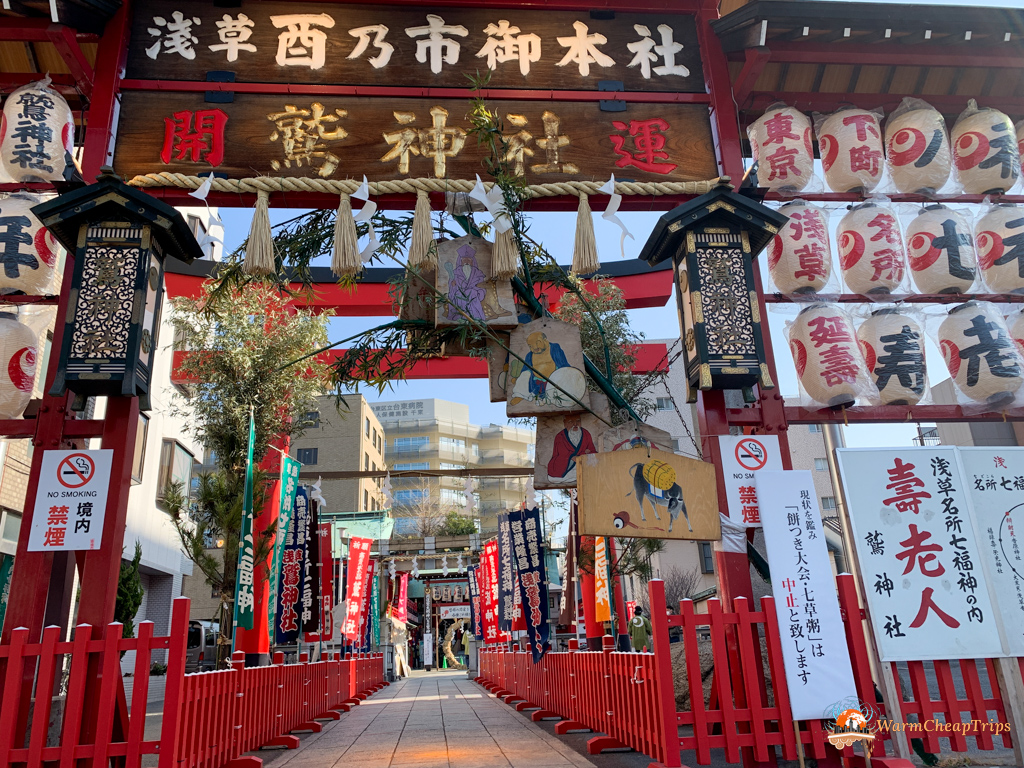 How do the 7 lucky gods pilgrimage?

Shichifukujin Meguri can be completed by making three types of collections. At the first temple, you decide what you want to collect and in the following, you will always collect the same object, of course representing the corresponding divinity and the name of the temple.

I chose the Fukue, an image of the 7 deities where to collect the 9 stamps of the temples. The cost of the Fukue and the first stamp is 700 yen, each subsequent stamp costs 200 yen. Total 2,300 yen.

Calligraphic writings with the scarlet stamp can also be collected, similar to those collected on the goshuincho, choosing the Shikishi. Initial cost 600 yen to which 300 yen must be added for each calligraphic print.

The third option is the Fukusasa, a bamboo branch on which small ema (wooden tablets) depicting the deity hang. For this I don’t remember the single prices, but the total will turn out to be 3,300 yen.

Some temples offer pilgrimage relics only at the beginning of the year, while others, such as Asakusa’s Shichifukujin meguri, remain active all year round. 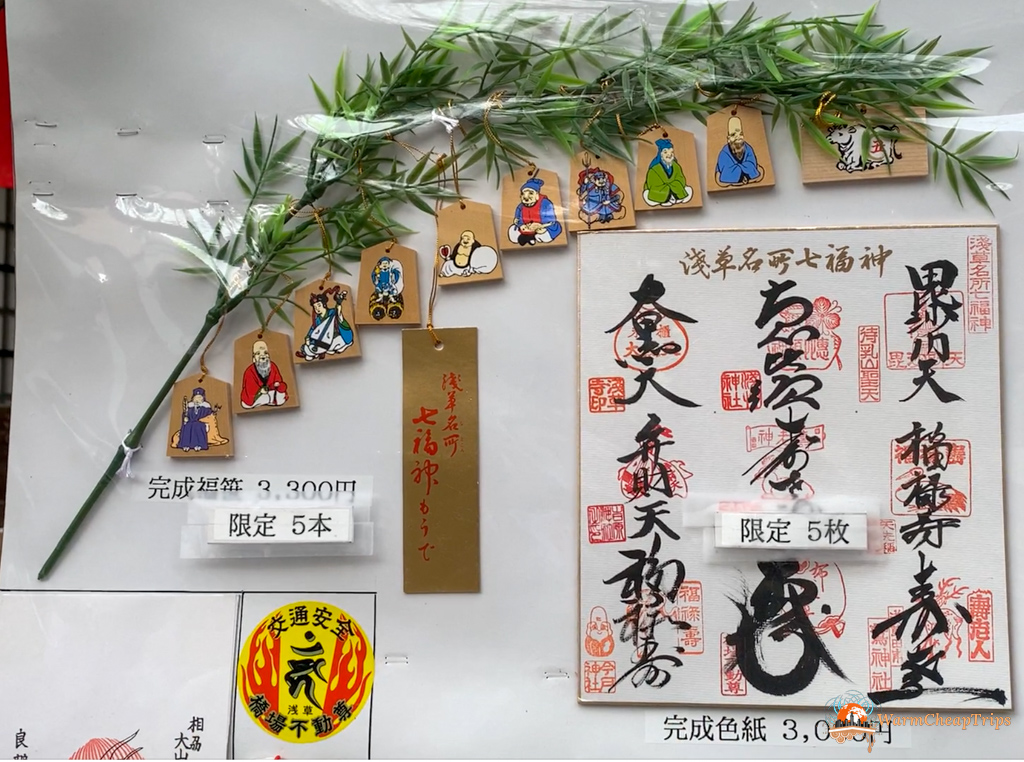 This Japanese tradition is widespread throughout Japan and you will find several in each city. I remember seeing some in Nikko and Kawagoe for example!

In Tokyo, one of the most famous is Yanaka’s Shichifukujin Meguri, with various temples scattered throughout the magical atmosphere of the shitamachi, the lower city.
Or you can do it in Meguro, looking for temples in a chic area of the city, in Ikegami among the various temples around Honmonji, one of the most important temples of Nichiren Buddhism, or even in Nihombashi, the ancient heart of Tokyo!