When I travel I usually choose where to overnight based on location and price, often choosing hostels, airbnb or simple guesthouses. They just need to be clean and well connected, because I’m just sleeping there, as I spend most of my time out exploring!
The Japanese ryokans, however, are a separate chapter. They are a journey within a journey, they are the destination to be discovered and fully experienced. I often hear that among the experiences to do in Japan, is listed “sleeping in a ryokan”… well, I’d choose the verb “stay” better. Because the ryokan experience is something that goes beyond a simple overnight. And I’m not just referring to the fact that traditional meals are also served or you have the opportunity to soak in an onsen. I’m talking about omotenashi, the art of Japanese hospitality.

Omotenashi is anticipating the guest’s desire, recognizing their needs and exceeding their expectations. It’s attention to detail, it’s uniqueness, it is making the guest feel appreciated.
It’s that ability of Japan to steal your heart, to make you leave with the certainty that you will come back, because you will not be able to find that magic you felt in Japan anywhere else.

Ootenashi is the basis of everything related to hospitality in Japan, but it is in the ryokan that it finds its maximum expression. Staying in a Japanese ryokan means living a unique experience, immerse in Japanese culture. 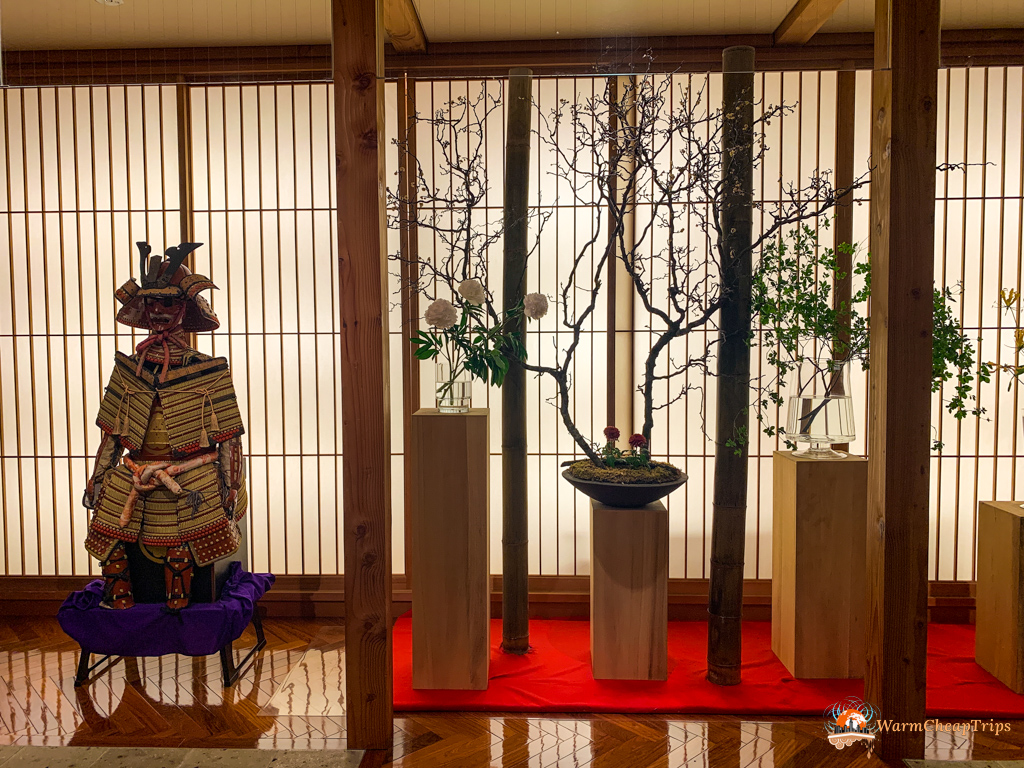 Ryokan, what is it?

But let’s get to the point. A ryokan is a traditional Japanese inn. Of course, it is much more than just a hotel in the “western” sense of the term, because it is a real experience. It is an opportunity to try all the things that in our imagination we associate with Japan: tatami, futon, yukata, onsen and kaiseki cuisine.

There are also ryokans in the city but is in the onsen town that you can fully enjoy at its best the ryokan experience. Also because part of ryokan experience its soak in hot waters and doing it in a hot spring is much better than doing it in simply heated water!
Very often the indoor and outdoor baths are in harmony with the surroundings and often the men’s and women’s baths are reversed every day so that guests can try both environments (one in the afternoon/evening of the first day and one the next morning).

When you enter a ryokan, you forget about the outside world and enter a microcosm where you can relax, away from the hectic everyday life. Even the shoes are left at the entrance: you put on the slippers lined up on the slightly raised floor and leave all the stress behind.
The staff will take care of you, explaining in detail how meals, onsen and all the information you might need will work and you just have to immerse yourself in a typically Japanese atmosphere.

The rooms of ryokan

The rooms of the ryokans are generally in Japanese style, with a tatami (woven-straw) floor, built-in wardrobes and the tokonoma, the niche in the wall where in traditional houses you can find calligraphic works or ikebana, which maintains the same use in the most sophisticated ryokans, while it remains empty in most common ones.
When you enter the room, you will not see any bed, because generally you will sleep on the futon, the typical Japanese bed on the floor, which will miraculously appear after dinner!

Often in addition to the central room where futons will appear, there is also a small veranda with another table and chairs, divided from the rest of the room by traditional rice paper walls.

In the rooms of the ryokan there are always also a kettle for tea and welcome sweets and the yukata – a sort of traditional dressing gown with which to go to the onsen, which doubles as a pajama.
It’s not rude to walk around the ryokan, through the streets of the onsen towns, or to have dinner wearing the yukata, indeed it is common practice. In winter, haori, traditional jackets, are also provided to be worn over the yukata because the corridors are generally colder than the rooms and other spaces used. 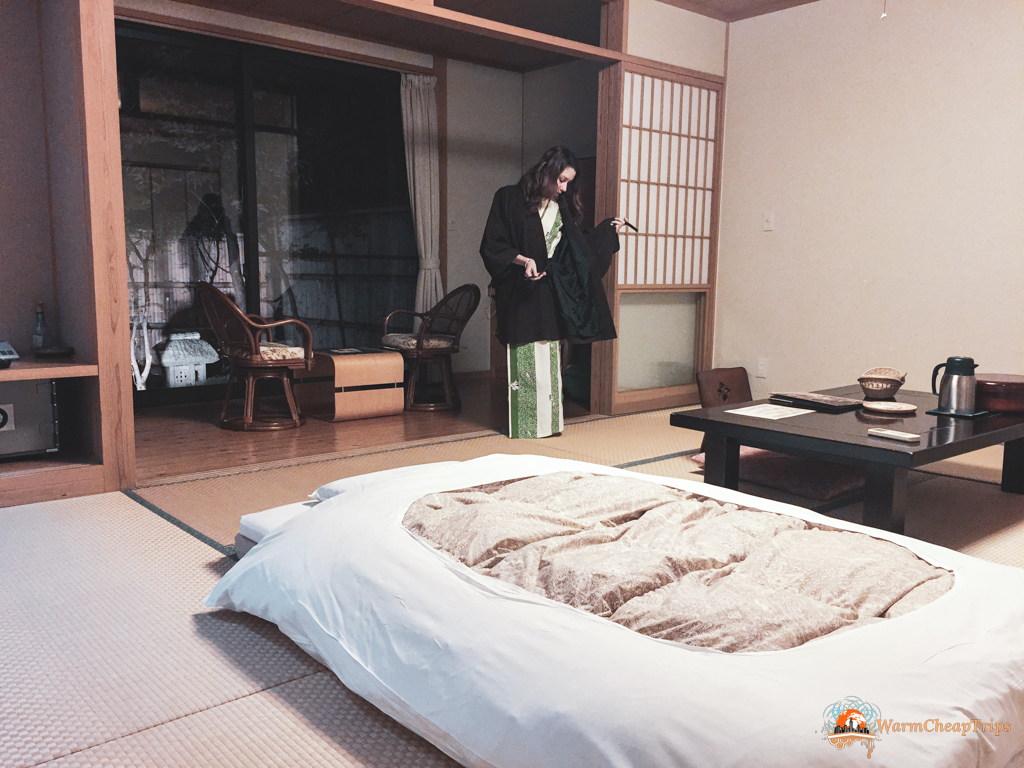 Staying in a ryokan also includes the opportunity to taste kaiseki cuisine, traditional Japanese cuisine. Kaiseki cooking is an art! Many small portions all served together, in many small decorated saucers, all perfectly in harmony. Harmony of flavors, colors, arrangement. The dishes are local specialties that vary according to the season, presented in such a way as to be pleasing to the eye, as well as to taste and smell. You will find vegetables, rice, pickles, meat, sashimi, soup, grilled fish,… mall portions yes, but believe me, it will be hard to finish everything.
The breakfast is also very abundant and typically Japanese. Japanese breakfast is almost more like a lunch. Rice, miso soup, vegetables, grilled fish, tofu…

In many ryokans, meals, especially dinner, are served directly in your room or in rooms reserved for you, to increase that sense of peace and relaxation of feeling “at home away from home”. And just to be as relaxed as possible, forget the elegant dinner clothes: in ryokan you can dine in yukata, the same one that you can wear instead of pajamas inside your futon if you want!

The hours of the ryokan

Of course, everything is dedicated to relaxation, but don’t think that not having hours is relaxing, quite the contrary! It’s not at all healthy for our biorhythm. The ryokans have quite fixed hours, ideal for enjoying this Japanese experience to the fullest and even if you would like to visit all of Japan in three weeks, allow yourself a slow time to enjoy this experience.

It may seem early, but actually it is the optimal time to shake off the fatigue and have the right time to soak in the onsen! Or you can browse among the souvenirs of the shop inside the ryokan, sip a cocktail at the lounge, sing karaoke or simply admire the floral compositions or works in the hall. These are all activities that are generally found in ryokans!

b is generally served between 07.00 and 09.00 (you must indicate your preferred time) and check-out is by 10.00. Since the onsen are generally open until late at night and reopen around 05.00 in the morning, you have plenty of time to take a nice hot bath both at night and at dawn. Let’s see if you don’t feel super relaxed! 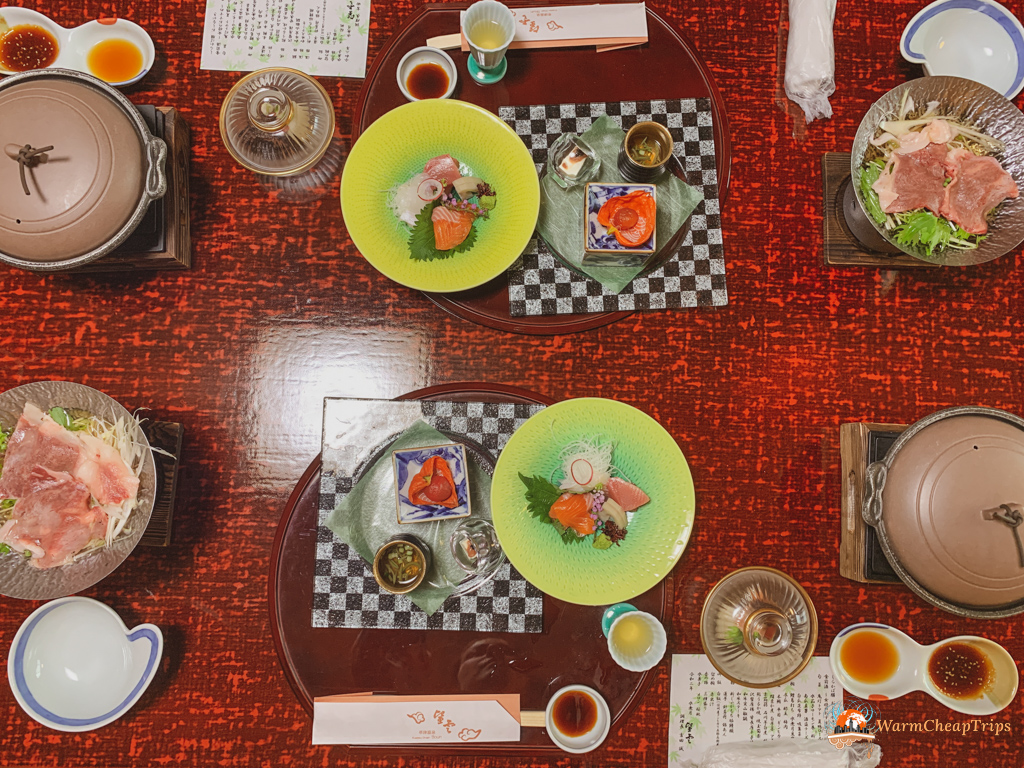 How much it cost to stay in a ryokan?

Ryokan is certainly an unforgettable and essential experience, although not cheap! But it worth, consider the quality of the service, the ambient and the food. It’s any way an affordable price for once in a lifetime, because there are many excellent ryokans starting from 150$ per night per person, which if we consider half board is not exaggerated. The only precaution: the price of the ryokan is always per PERSON and not per room and apart for infants, there is no reduced rate for children.

Of course the price goes up for more spacious rooms, with private onsen or with the choice of specialties served for dinner.

The alternative to ryokan can be the minshuku, simpler and often family-run, where you can still sleep in a futon on the tatami, enjoy traditional Japanese dinner and breakfast, immerse yourself in boiling water (even if there is often only one tub less scenic). The price is certainly lower.

Some ryokan I recommend

Most travelers choose to stay in ryokan in Hakone, as it is a onsen town full of things to do and see easily accessible by public transport and within the classic tour for the first time in Japan. Unfortunately I have never stayed overnight in Hakone, so I have no direct experience of Ryokan to recommend.

I experienced ryokan in destinations less-known to foreign tourism, although quite renowned for internal thermal tourism. Some of these ryokans do not have the site in English and are not easily accessible by public transport, it would be better to rent a car (or use the shuttle service of the structure) and they are the classic ryokans where you go to relax, not to force to visit the surroundings. 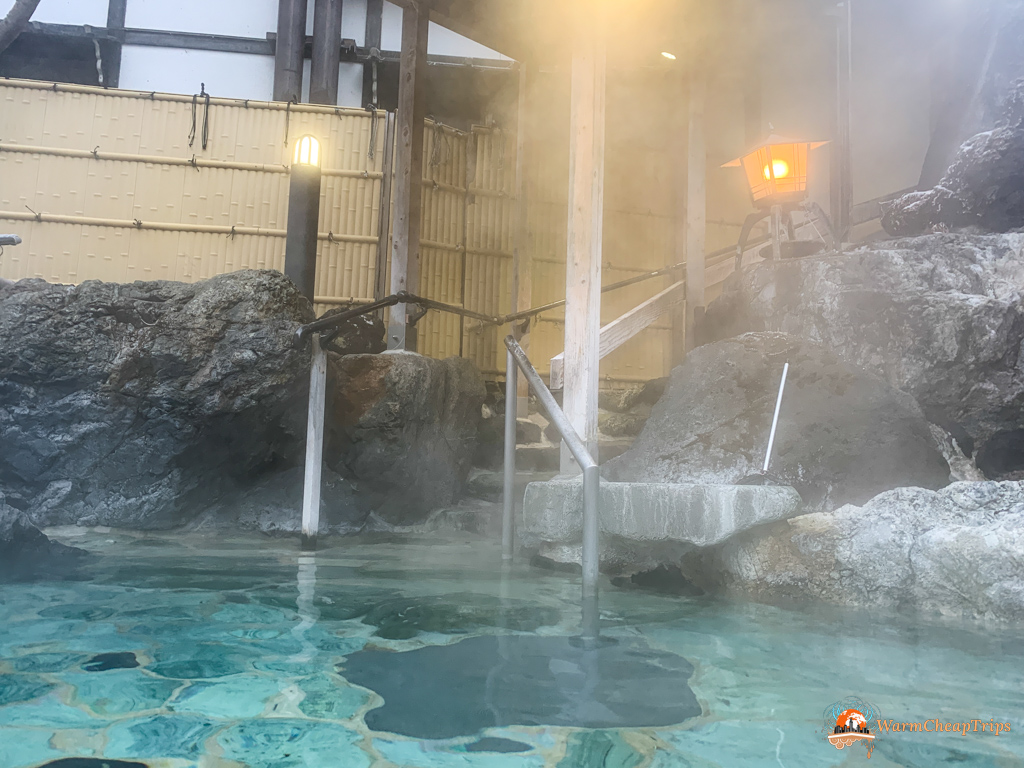 A fantastic ryokan in a small village hidden in the Nikko mountains, steeped in the history of the Heike (Taira) clan, with a wide choice of both indoor and outdoor onsen tubs, immersed in nature. Dinner is irori, a type of cuisine that includes food grilled on the fireplace in the center of the table. It was a fantastic stay, which you enjoyed very much on Instagram and on which I will soon write a dedicated post.

A few steps from Yubatake, the central square of Kusatsu, and from Sainokawara Park, it is one of the ryokans with the best cuisine in Kusatsu. Here we opted for dinner in the room and it was wonderful to receive those delicious dishes served on our table, while eating sitting on the tatami. After dinner, we went out to admire the illuminated Yubatake and on our return the magic happened: cleared table and futon ready! In addition to the standard yukata provided by the ryokan, you can also rent a more colorful daytime one here for just 500 yen.

I went to this ryokan for a business trip focused on promoting Ikaho as a vegan-friendly destination and I was able to try a ryokan experience with vegan meals! I must say that the dinner was very abundant, with a wide variety of very tasty dishes and so was the breakfast (even if my body not accustomed to fruit and vegetables had a lot of trouble eating vegetables in the early morning…). The ryokan offers the two types of thermal waters typical of Ikaho and the outdoor tub is an uncovered tub that allows you to admire the sky and there are also typical straw hats to wear to shelter from rain and snow while immersed in hot water!

Here too, I was there for a business trip and I remember about half an hour’s drive through the snow to get there (free shuttle available by reservation from Jinba and Hikarigaseki stations). The wonderful thing about this ryokan is the private onsen that can be booked for free, detached from the central body of the structure and surrounded by nature. I was there in March, with still a lot of snow, and snow boots were available to cross the garden and reach the private onsen! Then being in the prefecture of Akita, you are greeted at the entrance by a very cute Akita Inu who lets himself be caressed and pampered… what more could you want?!

In this ryokan in the Caldera of Mount Aso in Kyushu, all rooms have a private outdoor onsen! And the price is absolutely feasible, being similar to other ryokan without a private onsen …. the only thing is that you need a car to reach it or you need to take a taxi.
In addition to the fantastic private onsen in the room, there is of course also the public one, surrounded by nature. The food is delicious and it is possible to choose different courses for each person (which is not always allowed).

Did you like the article? Offer me a coffee 🙂