Ishikagi is the largest of the Yaeyama Islands in the southern part of Okinawa prefecture. Even it belongs to Japan, is definitely closer to the coasts of Taiwan than to those of “continental” Japan (meant as the 4 main islands) and the culture is also very different.
I only spent a long weekend in Ishigaki, but I recommend staying at least a week so I can also visit the other Yaeyama Islands and enjoy Ishigaki slowly.
Also in this my second time in Okinawa, a typhoon hit the island on the day of my departure, stacking me in Ishigaki for an additional… it almost seems that Okinawa doesn’t want to let me leave!

Contenuti nascondi
1 Getting to and around Ishigaki
1.1 How to get there
1.2 Move around Ishigaki
2 Ishigaki: beaches, nature and culture
2.1 Ishigaki Yaimamura Village
2.2 Ishigaki Stalactite Cave
2.3 Ishigaki beaches
2.3.1 Kabira Bay
2.3.2 Sukuji Beach
2.3.3 Yonehara Beach
2.3.4 Sunset Beach
2.3.5 Shirao Beach
2.4 Escursion to Taketomi
3 Where to sleep in Ishigaki
3.1 Condividi:

Getting to and around Ishigaki

The island of Ishigaki can only be reached by plane.
There are frequent flights between Naha (Okinawa) and Ishigaki, both with ANA and with the low-cost Solaseed Air. The flight lasts about an hour and the cost is generally around 6,000yen one way.
You can also fly directly to Ishigaki from Tokyo and Osaka and seasonally from Nagoya and Fukuoka.
The flight from Tokyo takes about three hours for a cost that is generally around 20,000yen round trip.

There are also some flights that connect it to Taiwan, although not very frequent.

The best way to visit the island of Ishigaki would be to rent a car or a scooter. To drive in Japan you need an international driving license, I had chosen this option when I had visited the main island of Okinawa, but this time I opt to use buses.

A one-day bus pass is available for 1,000yen or a 5-day pass for just 2,000yen. The pass is absolutely beneficial from an economic point of view, but there are only a few buses per day, so it’s necessary to organize the day following the bus timetable.
I read about the presence of taxis, but personally I only saw them at the airport and near the port of Ishigaki. I’d have liked to take one from Yonehara Beach, but not only haven’t seen anyone, but I have hardly seen cars on the street! 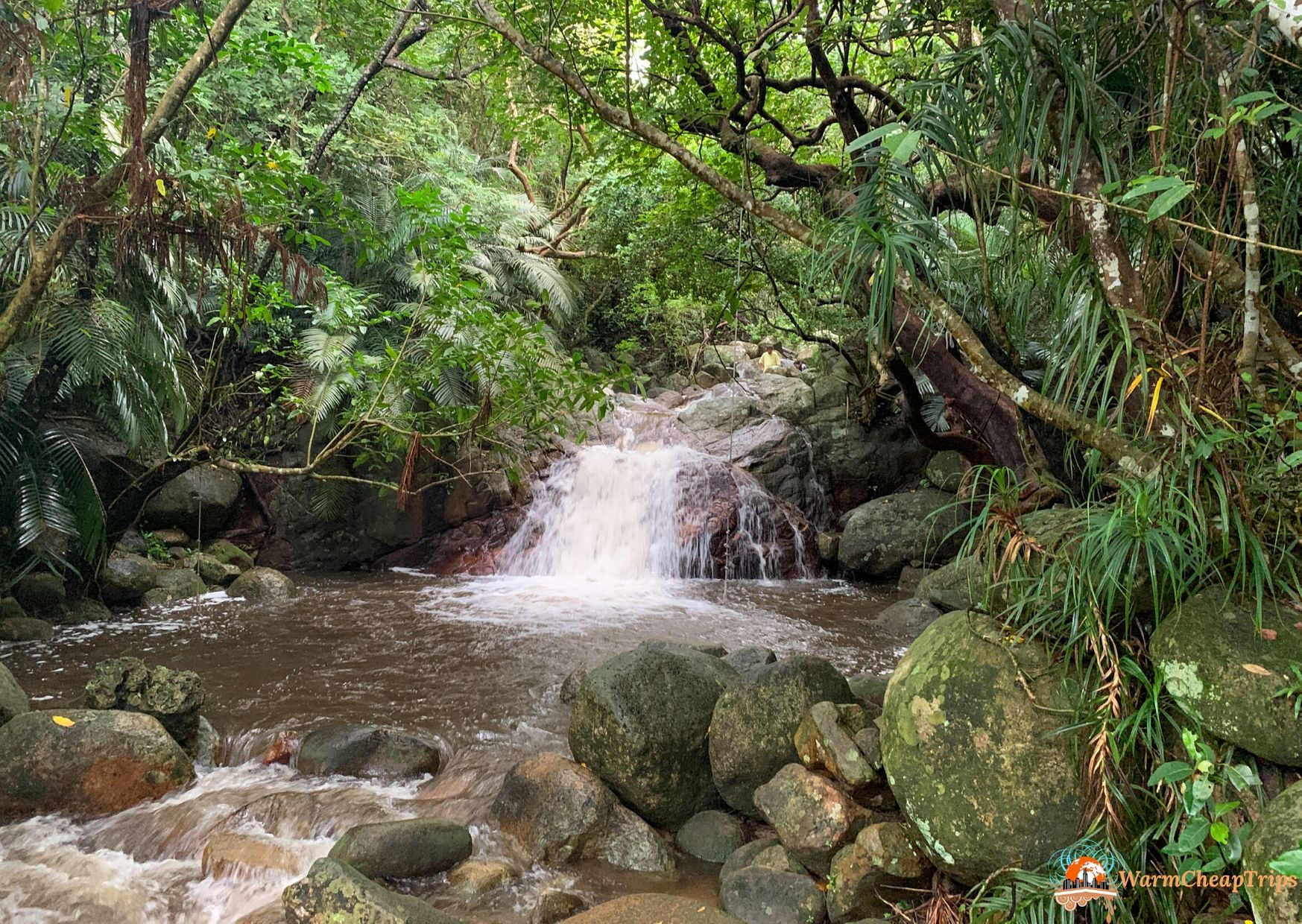 Ishigaki is a scuba diving paradise for its coral reef and giant manta rays often visible off the coast. Its crystal clear waters and the beauty of its beaches made it listed among one of the best destinations to discover in 2018. It’s also the starting point for exploring the other islands of the archipelago such as the Taketomi Island, that I loved very much, or the wild Iriomote Island, which I hope to have occasion to visit soon.

The port area is what we can consider the center of Ishigaki, and it is a very convenient area to move around the island especially if you use public transport.
From the port, frequent ferries leave for the nearby islands and there are also many stands where you can book the excursions. Nearby is the bus stop and the Euglena Mall, the commercial area of ​​Ishigaki, full of souvenir shops and local food.

However, the best beaches and natural beauty of Ishigaki are set more in the central-northern area of ​​the island and are possible to reach by bus. Google Maps also works very well here, indicating the various buses that you can take to reach the desired area.

If you want to learn about the particular culture of the Yaeyama islands, this open-air museum collects houses typical of the area where objects traditionally used by the people of the island are exposed and explained. It’s also possible to see performances and join activities related to local culture. Furthermore, there is an area with free little monkeys!
Other than play with monkeys I also enjoyed a show of local music and traditional dance performed by three still super active over 80!
Open daily from 9.00 to 17.00, admission 1,000 yen 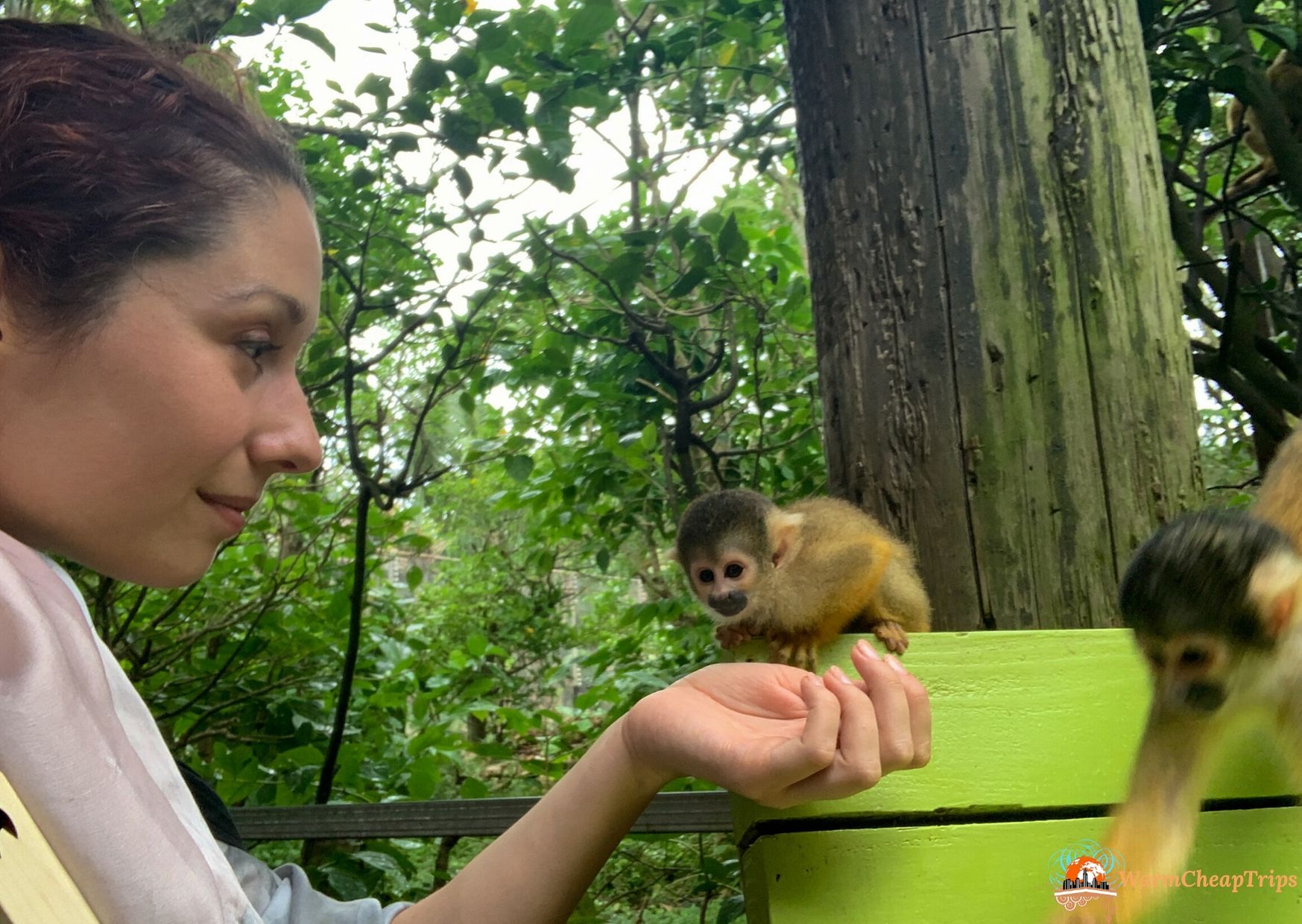 The southernmost limestone cave of Japan is another important attraction of Ishigaki Island. It was made by the rise of coral reefs from the depth of the waters. The lighting makes the cave even more suggestive and there is a stalactite with Totoro shape… unfortunately it was closed due to the typhoon, so I hadn’t t the opportunity to visit it. The cave extends for 3 km, but only 660 meters are open to the public: a 30-minute visit should be enough. There is also a tropical garden and a restaurant serving local specialties.
Open daily from 9.00 to 18.30, admission 1,100 yen

The typical postcard of Ishigaki, Kabira Bay is considered the most beautiful beach on the island, with emerald green waters and islets full of vegetation. It’s located below the village and the view from above is truly incredible! However, in this beach, you’re not allowed to swimming due to the strong tides, but its crystal clear waters and the coral reef can be admired from the transparent bottom-boats.

A couple of kilometers from Kabira Bay there is Sukuji Beach, a white-sand cove with a small pine forest equipped with toilets and showers.
The water is so clear that you might see starfish on the sandy bottom, please remember not to touch them and do not remove them absolutely from the water! 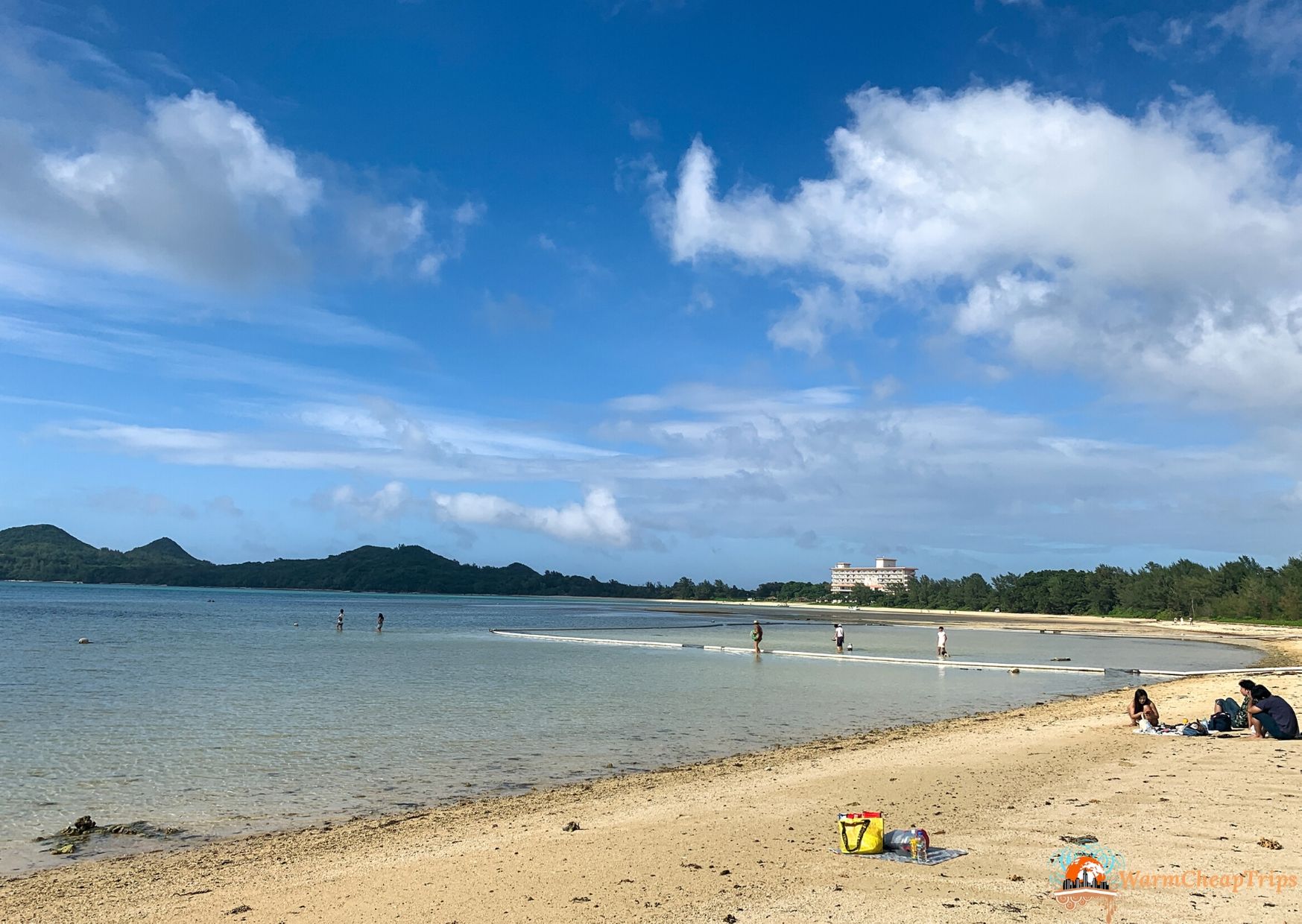 Yoehara Beach is one of the most beautiful beaches in Ishigaki, with the white coral reef that makes it the ideal destination for snorkeling. It is a rather long beach and if you’re leaving the area near toilets and showers, you can enjoy the beauty of the beach peacefully.
In the area there is also the Yonehara Palm Tree Groove.

As the name says, the beach of Sunset Beach is the ideal place for sunset viewing, but being in the northern end of Ishigaki, I was unable to fit the bus timetables. Here there are also nets for protection from jellyfish.

I also had to skip this beach, but because of the typhoon. It is located near the airport and is a 10 km beach where there is also the largest blue coral reef in the world. Highly recommended snorkeling here, you can see many species of tropical fish as well as over 70 different types of corals.

Just 15 minutes by ferry from Ishigaki, you reach that jewel that is Taketomi Island. A world apart, made of houses with orange roofs, sandy streets, and red and pink hibiscus. Wonderful beaches and water buffalo carts, which reminded me of the initial island of Final Fantasy X.
I will write a dedicated post to Taketomi Island, and I really hope to visit again to spend at least one night there.
I am immensely happy to have enjoyed this island on my own, and to not have been able to rent the bicycle as I initially planned, but explore on foot, slowly, burning my skins and cleaning up from the plastic dragged by the tides in the isolated spot where I choose to stop. 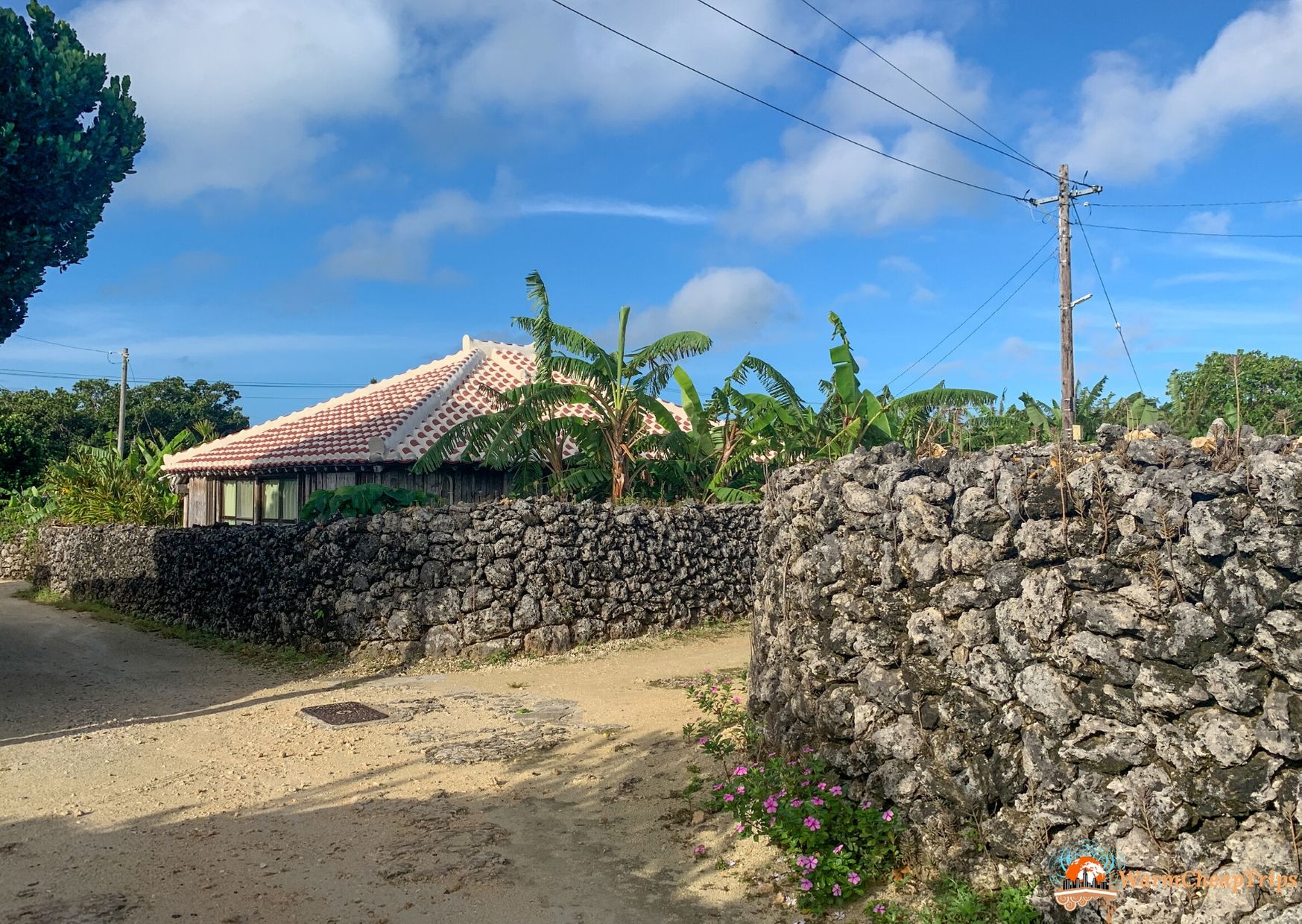 Where to sleep in Ishigaki

If you don’t have a car, the best area to stay is near the port, which even if not so rich in things to do, but it will be easy to move around by public transport.
I traveled alone and only for two nights (that become three due to typhoon), I chose to stay for the first time in a capsule hotel and I chose the Blue Cabin Ishigaki Jima 4,470yen for two nights with breakfast. I recommend to book it through booking because the additional night paid directly at the hotel cost me 4,000 yen!!
Anyway, the hotel was clean and comfortable, with a women-only floor and the possibility of reserving the Jacuzzi for an hour with a small supplement. Shared bathrooms with quality products and I haven’t suffered at all the limited space of the capsule.
The cabin is made up of a bed, side lockers with top opening for storing luggage, several sockets, suspended television and headphones. The door is folding and remains open in the lower part. It’s not possible to adjust the temperature of the air conditioner, but only the intensity and the first night I slept with the door slightly open to receive air also from the air conditioner in the corridor.
I had no noise problems from the neighbors and the breakfast was buffet style and varied.
The day we had to stay inside for the typhoon, the breakfast room (which is also a bar accessible from the outside) remained open only for guests who needed tables to eat/work on the PC or simply didn’t want to sit all day on the bed, very comfortable.