Jiufen is a mountain town east of Taipei, developed around a former gold mine. Today it is a delightful village of narrow streets and red lanterns, which it is said to have inspired Miyazaki’s Spirited Away. And yes, I admit that it was the atmosphere I saw in the photos on Instagram that convinced me to include Jiufen in my itinerary in Taiwan.
A short distance from Taipei, it is a half-day excursion often done in combination with Shifen, a town famous for the waterfalls and the railway tracks that cross the city center.
I decide instead to spend the morning exploring the many things to see in Taipei and I reached Jiufen by public transport, returning to the city that same evening.

I must admit, Jiufen is touristy, the narrow alleys, the souvenir shops, tea and street food attract many tourists, all obviously crowded along the Jiufen Old Street.

But it is a place that I would visit again and that I recommend. 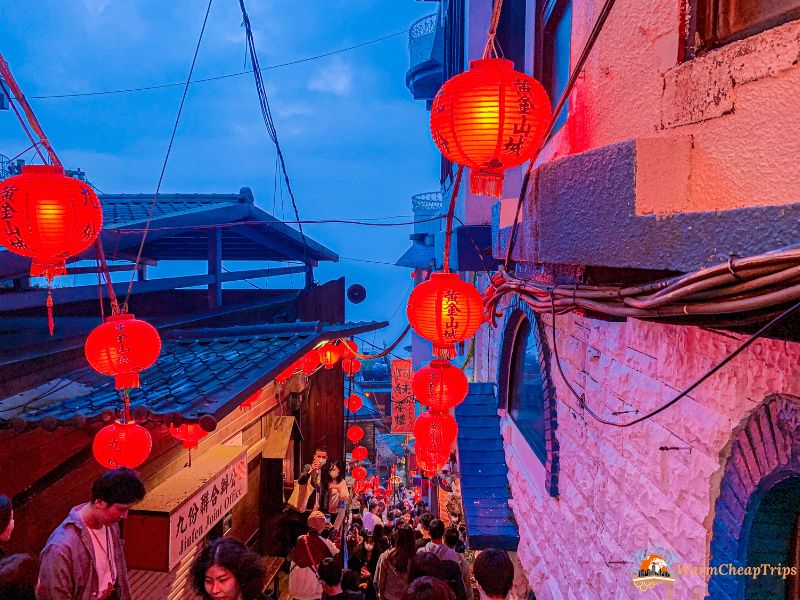 Ok, I was lucky because although I went there in the afternoon and stayed until dusk to enjoy the magic of its lit lights, I visited Taiwan at the end of February 2020, when the world started to stop and Taiwan closed its borders to tourists Chinese (who are the majority here). So I found a fairly quiet Jiufen and I was able to enjoy the magic of alleys of the Jiufen Old Street that run under a tangle of lanterns up to her, the A-Mei teahouse. A wooden and stained glass building, rising at the end of a descending staircase adorned with red lanterns, which inspired director Miyazaki for his Spirited Away.

Read Also: Beitou, a corner of Japan in Taiwan

The charm of the A-Mei teahouse lies in its facade, but it is one of the many tea houses in Jiufen, where you can sip fine Taiwan tea. There seems to be enough line to get into the A-Mei teahouse, and from the photos online, the interiors don’t look anything special, so we opted for the Juifen Teahouse, just beyond the stairs leading down to the famous photo spot, which also has a nice terrace from which you have a nice view of the A-Mei Teahouse.

The Jiufen Teahouse is Jiufen’s oldest tea house, and here you can enjoy excellent tea in a traditional setting. You choose the type of tea and they show how to make the infusions to optimize the flavor. As a lot of tea leaves are brought to you, you can make several infusions and treat yourself to quality time enjoying the traditional atmosphere. The unused tea leaves are then given to you to bring home as a souvenir. Cost for two people with dessert included was about $35 (the price varies depending on the type of tea chosen). 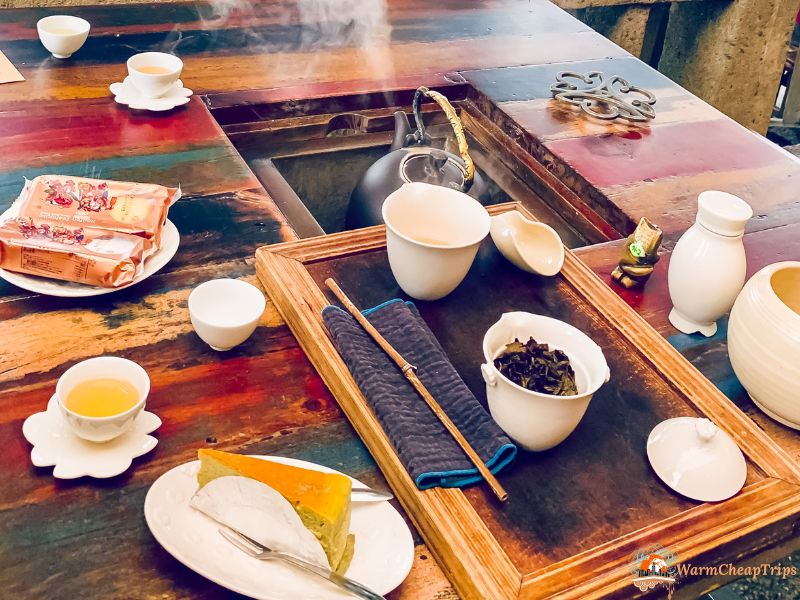 Contenuti nascondi
1 How to get to Jiufen from Taipei
1.1 Condividi:

How to get to Jiufen from Taipei

In my opinion, the most convenient way (as well as the one I chose) to get to Jiufen from Taipei, is bus No. 1062 which leaves from Songhshan Station (exit two, stop in front of the Sogo shopping center). There is one every hour and it also makes other stops in the city (check the stops and times here) that takes you to your destination in an hour and a half, cost 101 TWD.
On the way back, getting off at the same stop, take advantage of it to visit the Rahoe Market, one of the most famous night markets in Taipei.

The alternative to reach Jiufen from Taipei is to take the train from the central station in Ruifang and from the bus stop near the Ruifang police station, bus 825 (weekend only), 827 or 788. Cost 50TWD + 15TWD, plus or the less it takes the same time (varies according to the type of train, whether fast or local and the connection with the bus).

The top 10 things to do in Taipei