Along Kiso Valley – Walking on the Nakasendo between Magome and Tsumago

In the heart of the Japanese Alps, along the Kiso valley, ancient Japan continues to live in the wooden buildings of post town along the ancient Nakasendo trail, one of the 5 great roads of the Edo Period, still walkable today for some sections in Kiso Valley.

A journey into ancient Japan, reliving the atmosphere of the procession of Samurai who protect the feudal lords during the long trip between Tokyo and Kyoto, that has to be done twice a year and strictly on foot. The idea of that fascinating feudal Japan, of wooden houses, cobbled streets and surrounded by nature is real, and you can enjoy it in the Kiso Valley.

Visiting the Kiso Valley had been on my list for a long time and visiting Magome, Tsumago and Narai with my sister on her first trip to Japan was an even more exciting.

Contenuti nascondi
1 The Old Nakasendo Trail and the post-towns
1.1 Magome Juku
1.2 Tsumago Juku
1.3 Narai Juku
2 Hiking Nakasendo Trail between Magome and Tsumago
3 How to get there
3.1 Condividi:

The Old Nakasendo Trail and the post-towns

The Nakasendo trail, which crosses the Kiso Valley, was together with the Tokaido, which instead was on the coast, one of the most popular and famous roads, since it connected Tokyo to the ancient capital Kyoto. The Nakasendo trail was over 500 km long and along the way there were 69 post towns, or small villages, where pilgrims could rest, eat, drink and stock up on the necessary supplies for the journey.

Most of the ancient Nakasendo trail no longer exists, but among the Japanese mountains you can still find some sections that can be traveled on foot, such as in Hakone, or in the Kiso Valley, where there are still some Juku, post towns, well preserved and restored as they appeared in the Edo period.
Among these, the best preserved, where you can still breathe a past atmosphere and it seems almost possible to meet a samurai at any moment, are Narai, Magome and Tsumago. 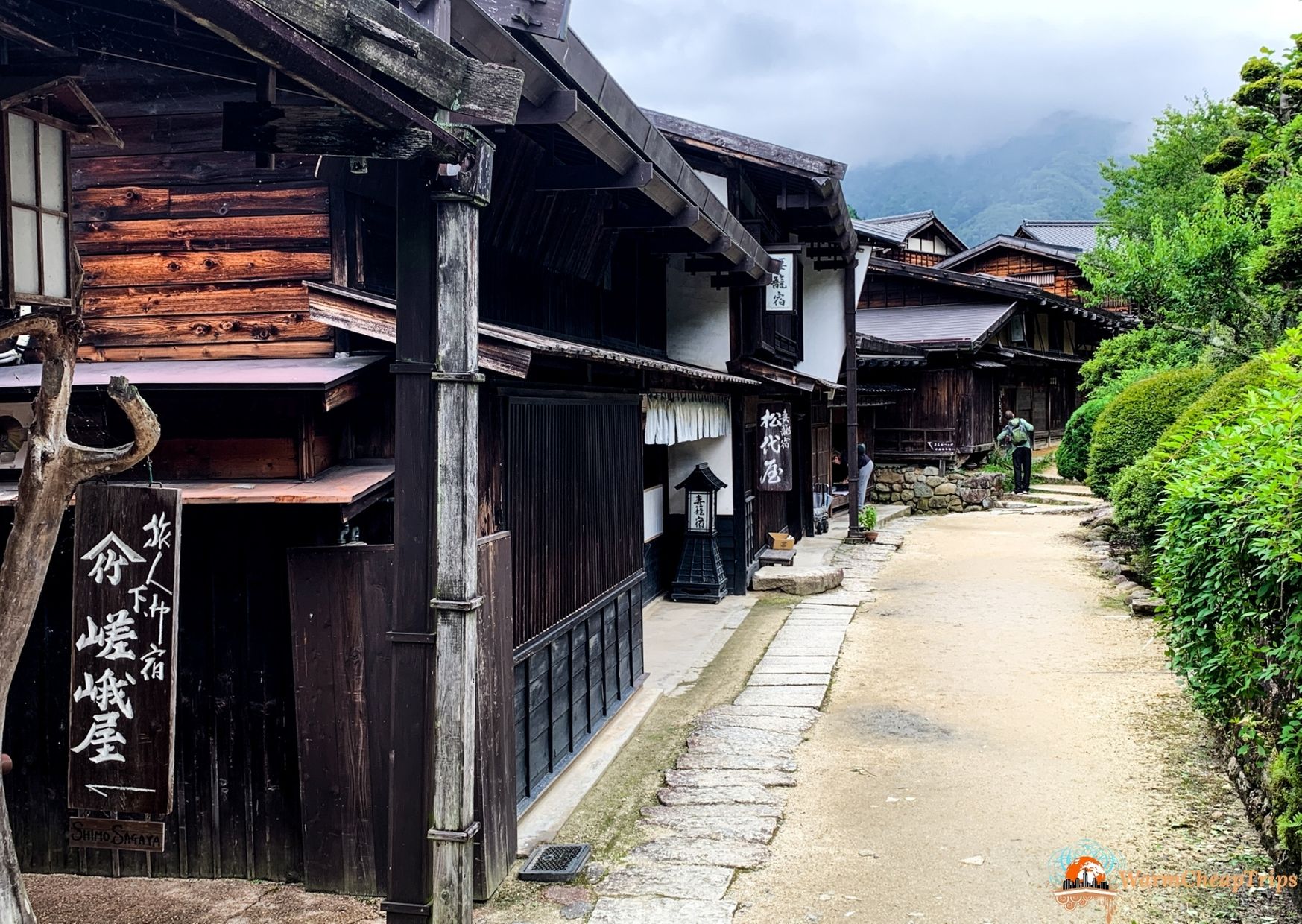 Magome was the southernmost post town of the 11 Juku of the Kiso Valley and today is often the entry point from where to start the Nakasendo hike to Tsumago. Built on a hill, the paved road and the wooden houses along the slope, are a postcard landscape, giving the impression of being truly in a past Japan. Magome is incredibly photogenic, it is a post town that wears its good suit, polished for big occasions, but at the same time is still authentic. She is the perfect model, who knows how to pose and exciting without any indication from the photographer. Cafes, souvenir shops, accommodation, even today the activities that take place in the wooden buildings on the sides of the road are the same as in the past, of course, adapted to the needs of the modern traveler.
There are also some museums inside the traditional houses, as well as an ancient water mill and the kosatuba, a board on which the laws and rules in force were indicated to be respected for anyone entering the city.

About 8km from Magome, you reach the 42nd Nakasendo post town, Tsumago. More rustic than Magome, it perhaps gives, even more, the feeling of a journey through time: less linear and with more secondary alleys, it is perfect for exploring the wooden buildings, along the Araragigawa River. Here too, the Honjin and the Wakihonjin, two types of Edo period inns present in all post-towns, are well preserved and can be visited.
We visited Tsumago both during the day, when tourists (few compared to the more classic stops of a trip to Japan) fill the streets, and in the evening, returning after the trekking from Magome along the Nakasendo. When the sun goes down Tsumago releases a splendid melancholy that fills the heart and moves. I would like to have the opportunity to come back again and overnight right there, in one of those ancient buildings that have seen a multitude of pilgrims…

Narai was station No. 34 of Nakasendo, the central point and therefore one of the most developed post towns, where almost all the pilgrims stopped to rest. Nicknamed “Narai of 1000 roof“, Narai is also the post station before the Torii Pass, the highest and most complex point of Nakasendo, another factor that contributed to the development of the “services” in this area. Over 50 historic buildings can still be found lined up along the kilometer of Narai Juku road, some of which are transformed into craft shops or local products shops, ryokans and restaurants, while others are inhabited. Some buildings are instead used as a museum, such as the Nakamura residence or the Kamidonya Shiryokan.
Although less famous now than Magome and Tsumago, Narai is a real pearl of the Kiso Valley, where you can relive the atmosphere of the past between wooden houses and lots of nature, with few foreign tourists but full of atmosphere and water wells that are still used today. Narai Juku is the post station in the Kiso Valley that I personally preferred, I don’t know if because the first one I visited, if for the practically total absence of tourists or because it is possible to walk for a kilometer immersing yourself in an ancient Japan… although it is a little more out of the way, I cannot fail to recommend that you visit Narai during your itinerary in the Kiso Valley. 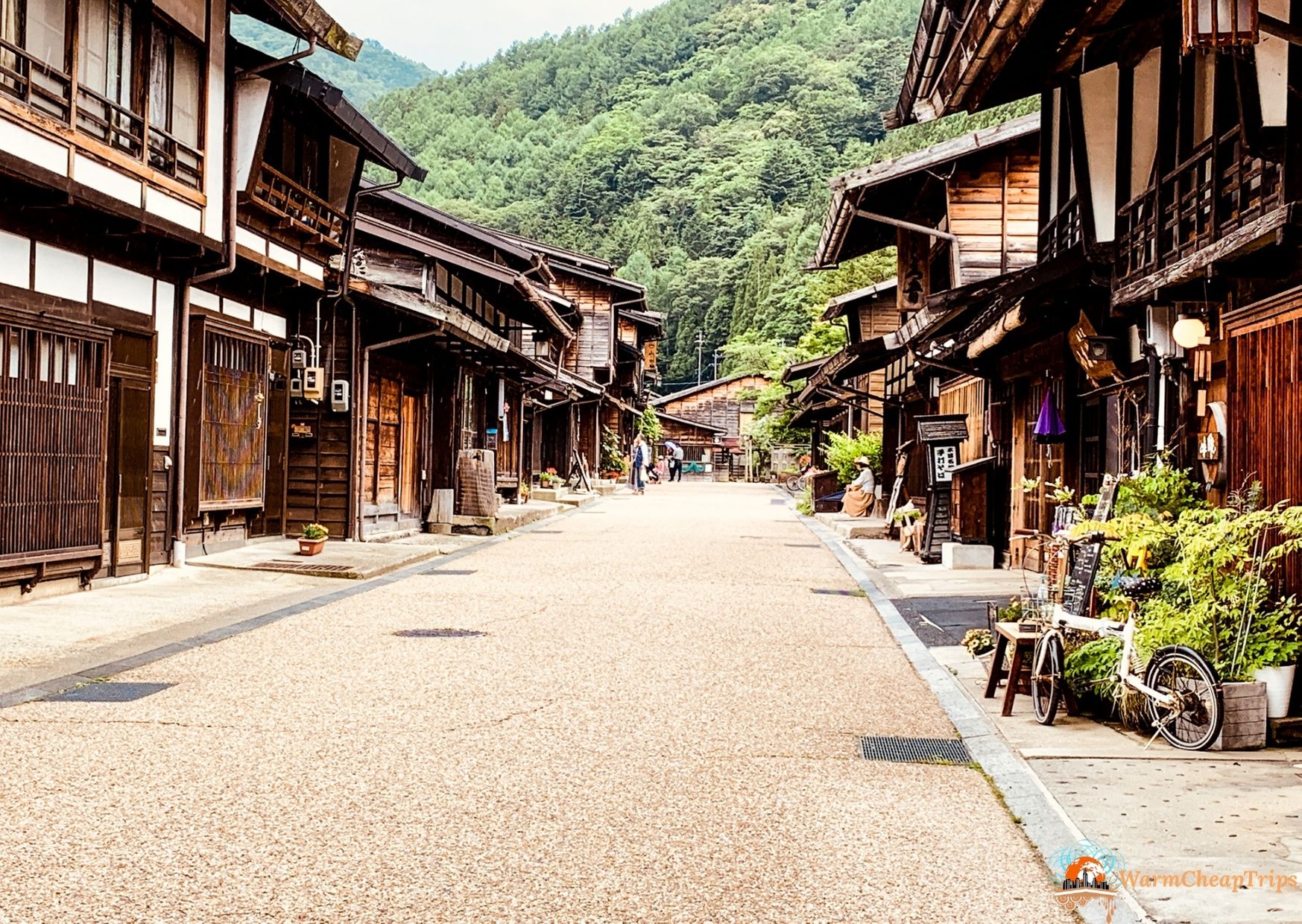 Along the Kiso Valley, there are still some walkable sections of ancient Nakasendo today. The most famous, and best-preserved, is the section that connects the 42nd and 43rd post towns, or the trail of Naskasendo between Magome and Tsumago.
This Nakasendo trail section is about 8 km long and it takes about two and a half/three hours walking calmly in nature, through cedar trees, some solitary houses and some brooks that weave the path. Sometimes it happens to return to the modern world to cross an asphalted road, but shortly after the bell to keep the bears away makes you immerse again in the magic of that journey through time that the Kiso Valley makes you do.
The path is paved almost everywhere, well marked and not demanding, easily walkable even with comfortable shoes (especially in the summer) and it is recommended to do the route by Magome in Tsumago because there is less climb and it is in the initial part of the route.

The two post towns are connected by buses and taxis as well, so after traveling the Nakasendo you can return to the starting point to stay overnight or you can directly ship your luggage from one post station to another by delivering them to the information center by 11 AM and paying approximately 500 yen. Many ryokans also offer a shipping service, but I would also recommend that you send the bulk of your luggage directly to the city after the days in the Kiso valley and travel with a backpack these one/two nights in the mountains. 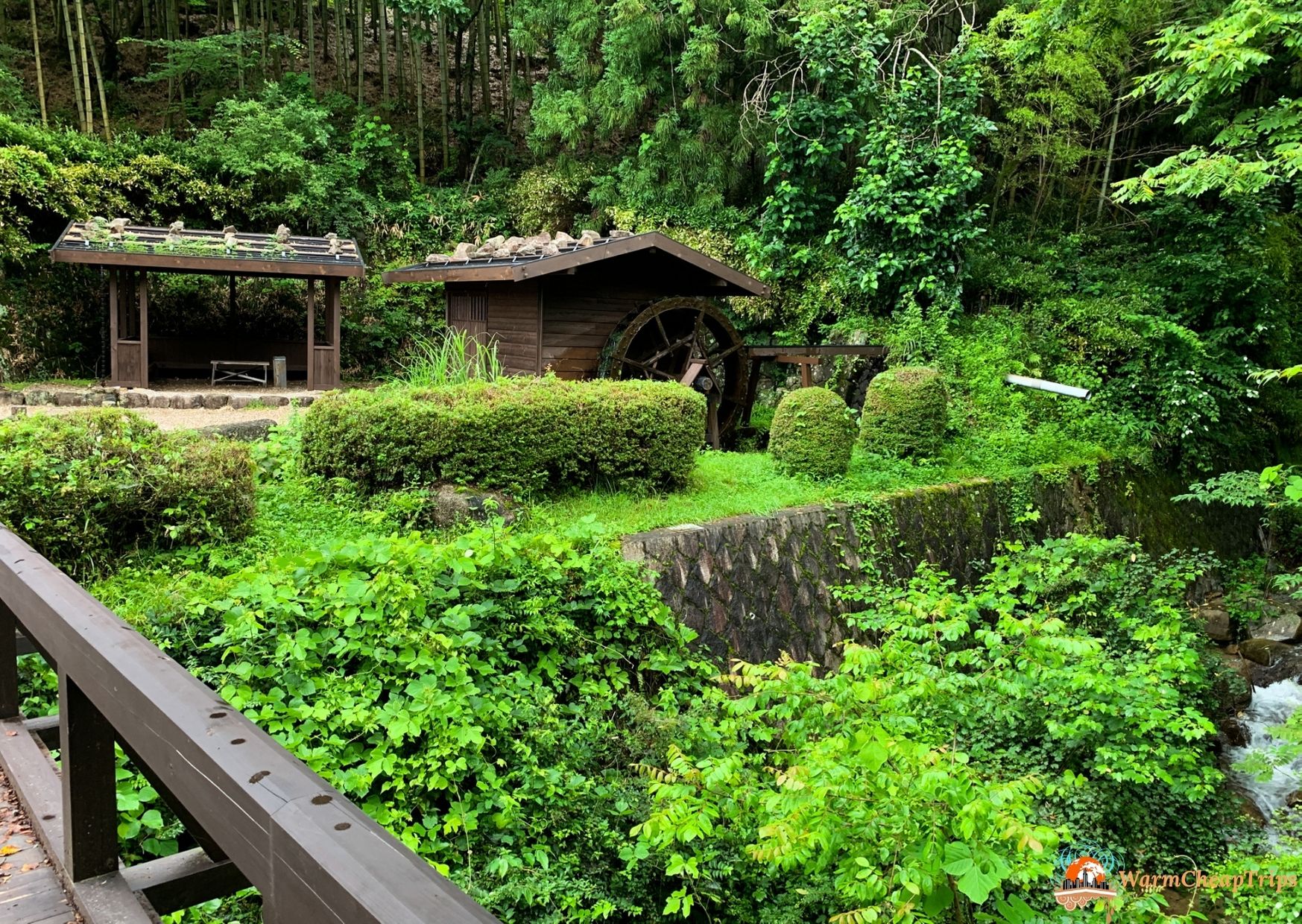 Having a car to visit the Kiso Valley helps to optimize times, as public transport is not as frequent as in cities and several changes may be required to reach a certain destination. We have rented a car and visited Narai on the first day, park in Tsumago on the second day and then from there, move by bus to Magome from where we hike the Nakasendo trail to return to the parking in Tsumago.

It is also possible to reach the Kiso Valley by public transport, taking the train from Matsumoto or Nagoya to Nagiso and Nakatsugawa and from there continue by bus to Tsumago and Magome respectively. Narai is also on the same railway line, but be aware that there is about one train every hour or so, so plan well with the times.

The solution I recommend visiting the Kiso Valley and travel the Nakasendo using public transport is to consider an itinerary of two full days, starting from Nagoya in the morning to Nakatsugawa where you take a bus to Magome. Take the Nakasendo from Magome to Tsumago and stay overnight in a ryokan or minshuku and the following day visit Narai, then move to Matsumoto from where to leave for Tokyo the following day.