Garda Lake: places to see on the west side

There are many reasons to visit Lake Garda, in northern Italy, touched by the three regions of Lombardy, Veneto and Trentino, offering wonderful views and interesting activities. In this post, I focus mainly on the west side of Lake Garda, which is the one I know best and where I have spent many weekends since childhood.

On Lake Garda you will find several beaches where you can relax but also various nautical and sporting activities to do around the lake. Then there are the beautiful villages, first of all Sirmione, full of colorful houses, little doors and flowers. Walking through the streets of the Garda villages calms you, cheers you up and fills your heart with joy, even if it happens in a gloomy day.
And then there are the excursions in the surrounding area, interesting trekking routes in the surrounding mountains and important cultural heritages such as the “Vittoriale degli Italiani”, making it the perfect gateway for everyone!
The west side of Lake Garda, in the Brescia province,  is a land of good wine, pretty villages, fortresses and castles, the right mix of nature, culture and food.

Read also: Best Things to do on Lake Iseo

Contenuti nascondi
1 Sirmione, the pearl of Garda
2 Desenzano, beaches and nightlife
3 Salò and the Riviera dei Limoni
4 The Vittoriale degli Italiani in Gardone Riviera
5 Limone and Tremosine and the unique emotions of the upper Garda
5.1 Condividi:

Sirmione, the pearl of Garda

While traveling to Lake Garda you cannot miss a visit to Sirmione, the lost of Lake Garda. A strip of land that enters the lake, a long and narrow peninsula with a unique charm. A place that has always been admired and praised by writers and poets.
Take a leisurely stroll through its delightful historic center that is full of cafe, shops and restaurants.

Do not miss the visit of the Scaligero Castle, the defensive fortress complete with a dock, the refuge of the Scaligera fleet, which offers wonderful views with its dock surrounded by walls. And right in the shadow of the Rocca, the splendid vintage cars of the Mille Miglia parade every year, making the atmosphere even more suggestive.
It is possible to access the castle, walk on the patrol walkway, from which you can admire the dock, and climb the tower from where you can enjoy a magnificent view of the lake.
It can be visited from Tuesday to Saturday from 8.30 to 19.30 and on Sunday from 8.30 to 13.30, admission €6.

A walk slightly uphill, just beyond the historic center, and you will arrive at another unmissable stop in Sirmione: the magnificent Grotte di Catullo. The remains of a Roman Villa that is said to have belonged to the Latin poet Catullus which offers a breathtaking view of the lake, while walking among ancient Roman remains and centuries-old olive trees. A truly suggestive place, which also houses a museum that preserves fragments of the frescoes that once adorned the villa.
Open from Tuesday to Saturday from 8.30 to 19.30 and on Sunday from 9.00 to 18.30 (reduced hours in winter), admission €6

Sirmione is also renowned for its thermal waters, you can benefit from it or enjoy a few hours of relaxation at the Acquaria Thermal Center, there are different rates and treatments to choose from. 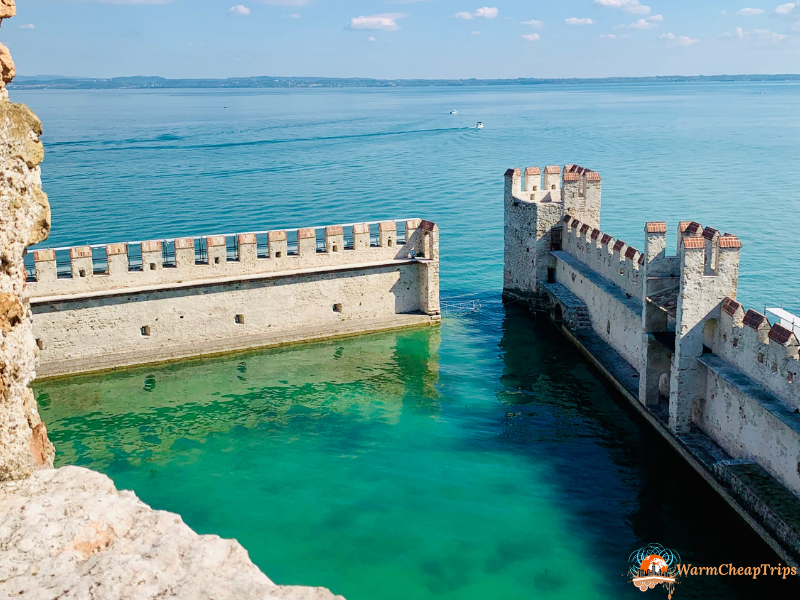 Another stop to be included in a weekend on Lake Garda, especially for those looking for the nightlife, is Desenzano del Garda. Also a pretty lake town, I recommend it for the numerous pebble beaches, ideal for taking a dip in the lake, which here is particularly beautiful. There are both establishments equipped with deck chairs and umbrellas, but also freely accessible sections.
Desenzano is excellent for spending summer evenings, thanks to the various clubs in the area.
The historic center of Desenzano is dominated by the Castle of Desenzano, whose walls in the past enclosed a small village with its bell tower. Today only a part of the walls and some towers remain, the keep and the panoramic observatory, from which you have a splendid view of the town and the lake.
It can be visited from Tuesday to Sunday from 9.30 to 12.30 and from 16.30 to 19.30, admission €5

Desenzano also has its own Roman Villa, although not as famous as the one of Sirmione. In addition to the archaeological area, it is also possible to visit the Antiquarium, with the exhibition rooms of the finds found in the villa.
It can be visited from Tuesday to Sunday from 8.30 to 19.30, admission €4 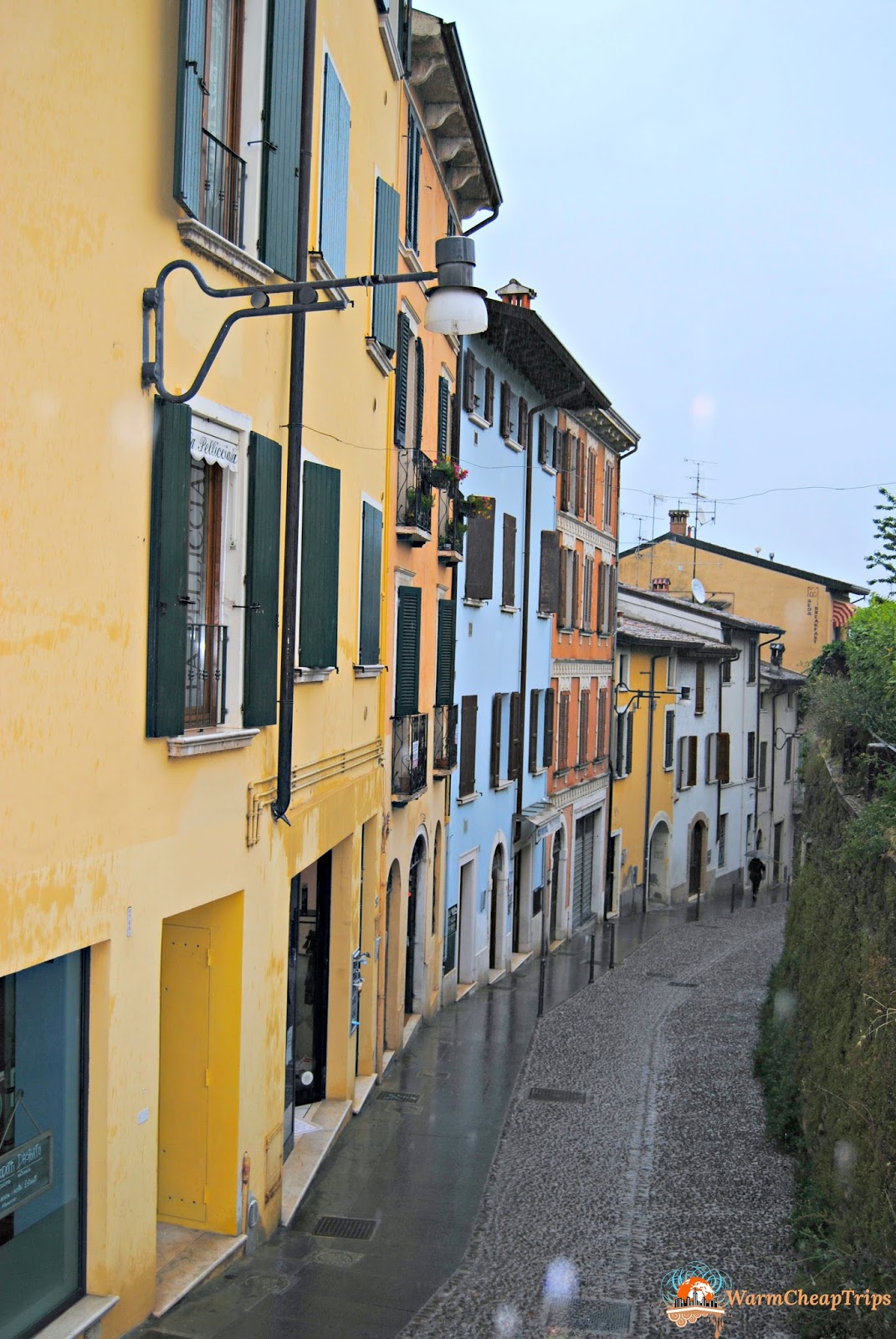 Salò and the Riviera dei Limoni

Famous above all for having been the seat of the ministries of the fascist government during the Italian Social Republic (also called the Republic of Salò), Salò is a town with a splendid and elegant lakefront, with the Palazzo della Patria and the Palazzo del Podestà, rich buildings of frescoes that now house the municipal offices.
From Salò also begins the so-called “Riviera dei Limoni“, a succession of pretty villages and lemon groves, which together with the olive groves and vineyards are the flagship of the gastronomic culture of Lake Garda. 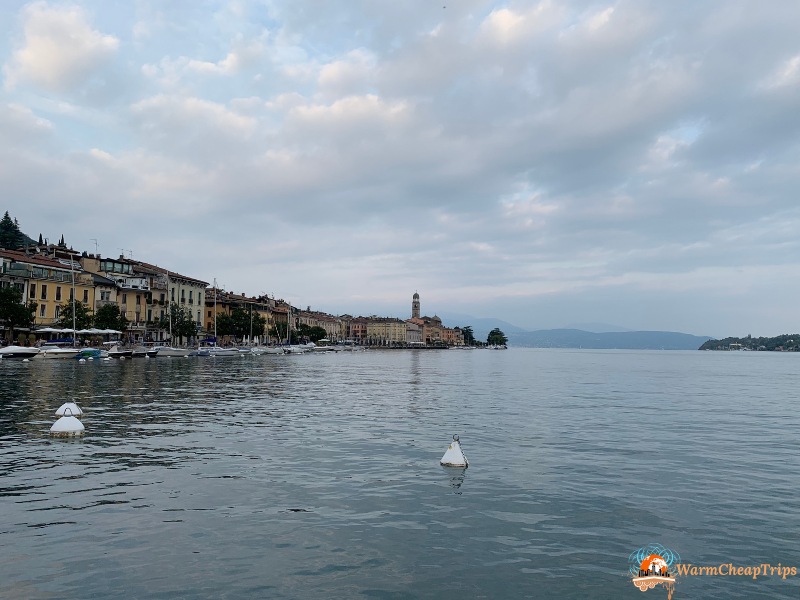 Who would ever think of placing a ship in the garden? But to Gabriele d’Annunzio of course! And this is just one of the many oddities that the italian poet collected and placed on that land purchased in Gardone Riviera which later became his home. A huge park with ponds and streams, an open-air theater, statues, museums and of course his house, the Prioria, which can be visited with a guided tour included in the price and which I highly recommend to enter the surreal world of the extravagant poet, accompanied by sublime and passionate explanation of the guides.
For the Vittoriale you will need an abundant half day, but it is a unique place, which D’Annunzio really wanted to give to the Italians and visiting it seems to me the minimum!
It can be visited every day, reservation required, full admission with a visit to the Priory €18

Limone and Tremosine and the unique emotions of the upper Garda

In the northen area of west side of Lake Garda, there are some of the most
First of all, the Garda cycle-pedestrian path, inaugurated in 2018 starts from Limone del Garda. A suspended walkway over the lake, is considered the most beautiful cycle path in Europe and part of a project that should then cover the entire perimeter of Lake Garda.
At the moment there are only 2.5km which is still enough to fill our eyes with the wonder of the view of the lake and the mountains on the opposite shore.

And then the village of Tremosine, perched on the side of the mountain and reachable along the Strada della Forra, considered the most beautiful road in the world and defined by Winston Churchill as the eighth wonder of the world.
6 kilometers of overhanging cliffs, tunnels in the dark, gorges and climbing plants, a wonderful road perfect to travel on a motorbike. Since 2020, a section has been closed due to landslides and landslides, but should reopen for summer 2022.
And after this wonderful road to get there, Tremosine offers another breathtaking spectacle: the Terrazza del Brivido. A concrete platform suspended in the void 350 meters high, from which you can enjoy an incredible panoramic view of Lake Garda. The terrace is owned by the Paradiso hotel in Pieve di Tremosine, but access is open to all visitors every day from February to November. 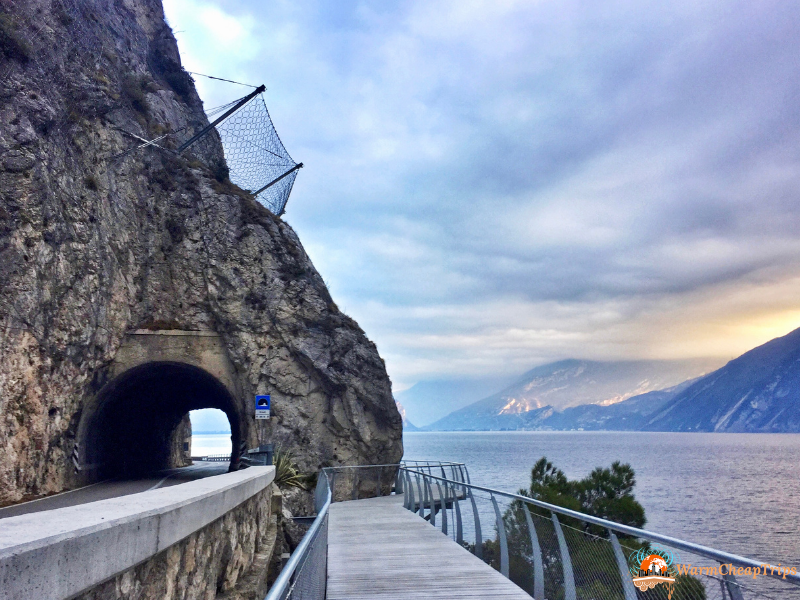 Did you like the article? Buy me a coffee 🙂