Mille Miglia, the amazing italian race between Brescia and Rome

Have you ever heard about Mille Miglia? If you love old car, of course, you’ll surely know.

But well, if not, Mille Miglia is just the most beautiful car-race of the world. 1000 miles from Brescia to Rome and back, through the amazing italian lanscape, driving an old-and-so-fashionable historical race car.

The original Mille Miglia was an open-road endurance and they run from 1927 to 1957 (stopped during the WW2), but the current Mille Miglia is no longer a race of speed, but a race of regularity on the road, where precision is the most important thing.
Nowadays, Mille Miglia is helded evety year around mid of May, such a great time to come to visit Italy and at the same time watch at thos beautiful cars racing in the streets!

Contenuti nascondi
1 Mille Miglia, the most beautiful race of the world
1.1 But…who win the Mille Miglia?
1.2 Some curiosity about Mille Miglia
1.2.1 Condividi:

Mille Miglia, the most beautiful race of the world

At the Mille Miglia can only participate cars made during the Original Mille Miglia years, between 1927 and 1957, with some exceptions for cars built in the early 20s-
The cars must be absolutely original, nor modified parts neither replicas are allowed.
The cars entered are 440 and priority is given to cars with a sports record or that have won a previous edition. All cars are scrupulously controlled, must be registered and have several documents to attest their originality, but I will not go into detail: this is a simple explanation of the Mille Miglia, without too many technicalities!

“Race of regularity” means that the route must be completed in a pre-established time, arriving at the finish line in advance or late leads penalties.
So you do not have to be the fastest but the most accurate.
And it is precisely this that makes this race so difficult and the prestige of winning the Mille Miglia has no equal!
The cars start one by one, in pre-assigned order, with a frequency of three cars per minute. At that point the sensor starts to calculate the time for the subsequent checks.
There are three types of checks on the Mille Miglia route:

– Time control (15 positions): generally on long distances, 100 penalty points for each minute of difference with the established time.

– Stamp controls with average speed check (19 positions): the average speed should never be higher than 50 km/h and at these “checkpoints” stamps are used to prevent competitors from cutting the route and be sure they have respected the average of correct speed.

– Time Trials (76 positions): generally very short distances, far from traffic or in closed road, a penalty is assigned for every hundredth of a second of difference on the pre-established time. These are the tests that most determine the progress of the race.

Being the Mille Miglia a race of regularity and not a race of speed, the winner is not the first crosses the finish line or the faster one.
The winner is the most precise.
Obviously the cars have big differences according to the model and the year of production, so it is assigned to each car a coefficient, which is used to “put at the same level” all the cars.
The various penalties registered are multiplied by this coefficient, in order to have more truthful results, taking into consideration whether a car is more or less simple and comfortable to drive.
At the end of the race all the penalty points accumulated in the various tests are verified, multiplied precisely by the relative coefficient, and whoever obtains the highest score, therefore with fewer penalty points, wins the race.
The prizes are symbolic, not cash; but in addition to the cup, faithful reproduction in solid silver of the original cup, has the prestige of having won the most beautiful race in the world! 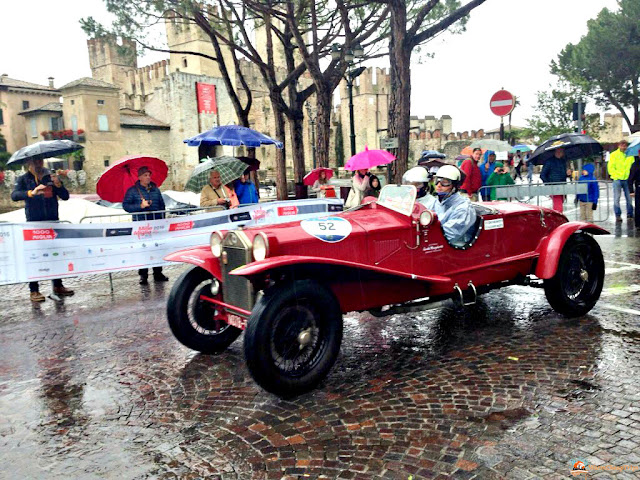 Some curiosity about Mille Miglia

In 1936 also Benito Mussolini took part in the Mille Miglia, on an Alfa Romeo 6C2300 Pescara, driven by his driver Ercole Boratto.

One of the very few changes accepted on classic cars, is the installation of small devices that increase the battery power of 30 watts: generally the original 9 Watt dynamo can’t keep the battery charged, and the machines would arrive at night without more working lights and stops!

The pilot from Brescia Franco Mazzotti was among the founders and founders of the Mille Miglia, and during the edition 2016 has indeed provided a passage of the cars at Villa Mazzotti in Chiari (Bs) in his honor.

Tradition has it that the departure of the Mille Miglia is under the rain … yes, almost every year the departure from Brescia is wet!

If this simplified explanation of the Mille Miglia has intrigued you and want to deepen, in Brescia there is the Museum of the Mille Miglia, open every day from 10.00 to 18.00 and the admission price is € 7.00 (reductions for over 65, boys and groups)