View of Mount Fuji is one of the most expressed wishes of tourists visiting Japan.
Mount Fuji is more than just a mountain. The highest peak in Japan, a volcano wrapped in legends and mysteries, a giant isolated from the unmistakable conical shape. The subject of many traditional paintings and often a backdrop to the events of Japan, his majesty Mount Fuji is the Spirit of Japan. A sacred mountain, where one of the most important Shinto kami lives, the essence of Japan. No wonder when you see it, from the plane, from the window of the Shinkansen or in the distance on the horizon, a warm feeling pervades us and we get so excited we almost feel moved.

Although the ascent to the summit of Mount Fuji is only allowed during the summer months, a trip around Mount Fuji is a good excursion from Tokyo throughout the year. 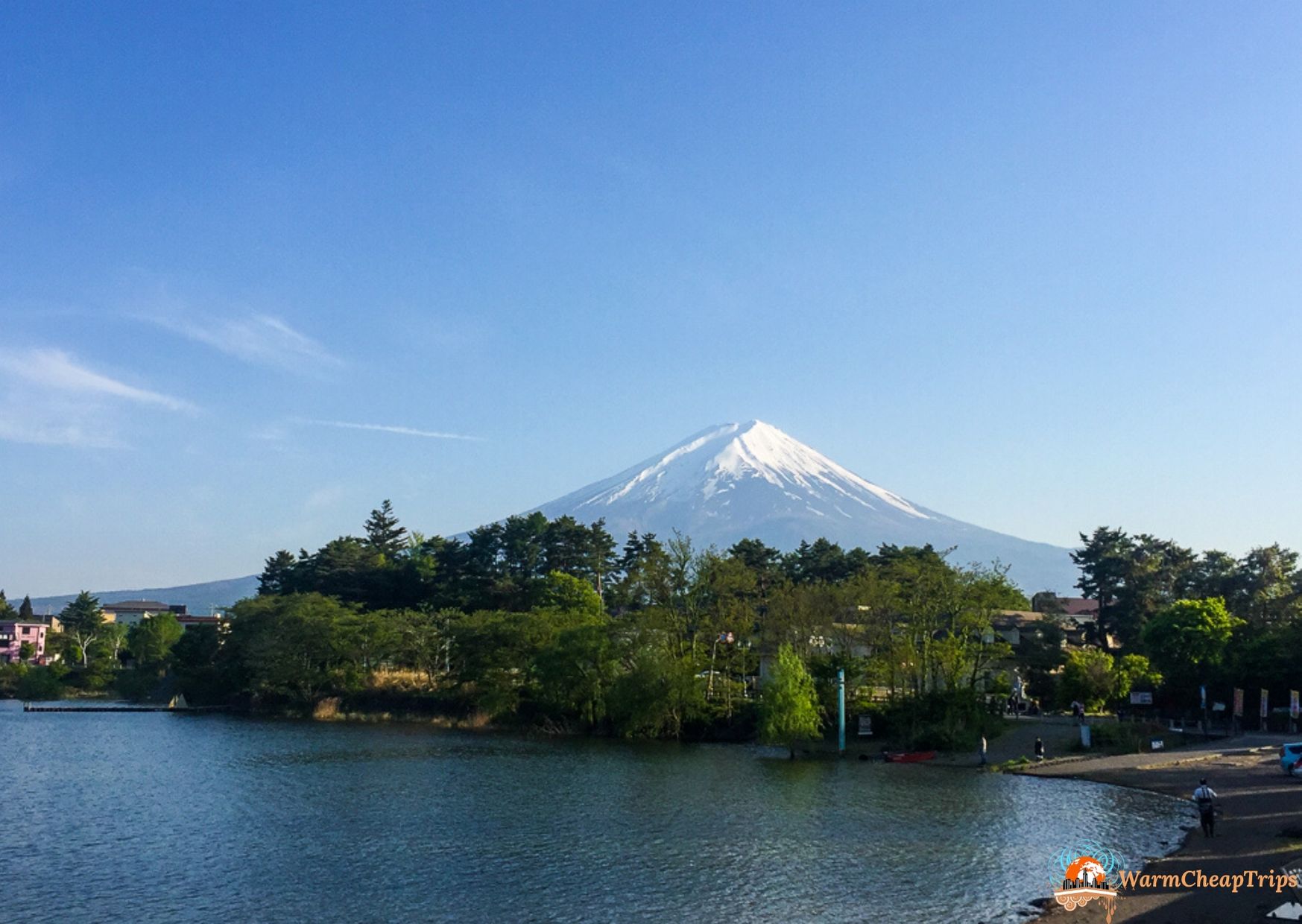 Where to See Mt. Fuji

There are several opportunities to see Mount Fuji, on clear days you can also see it from Tokyo, but the great mountain is often shy, surrounded by classic clouds that cover the summit, so if you want to be sure to see the classic cone shape, I encourage you to organize an excursion to see Mount Fuji in the Five Lakes region, so as to be almost sure to spot it!

On clear winter days and on rare occasions of clear skies during the rest of the year, it is possible to see the Mt.Fuji also from Tokyo, from the various observatories desk, but also from the Chuo Line, riding towards the western area of ​​Tokyo. Also from the beaches of Enoshima, from the peninsula of Miura or more frequently from Hakone. But if you want to be sure of seeing Mount Fuji clearly, then the best place is the five lakes region, especially the area near Kawaguchiko.

Kawaguchiko is also the ideal destination to stop and explore the Five Lakes region, famous especially for camping and fishing, as well as numerous nature trails. In Kawaguchiko there are also several onsen, many of them with a view of Mount Fuji. So if you are looking for a place to spend a few days relaxing in nature, consider to overnight here, but personally if this is a first trip to Japan, I only recommend taking a day trip from Tokyo to see Fuji, combining the visit to one of the area’s attractions.

The surroundings of Mount Fuji are rich in activities, nature and onsen and if you have a few more days I recommend you to overnight in the area maybe hire a car to move around the area in autonomy.

The arrival point for express and local trains, but also for most of the highway buses that serve the area, is the Kawaguchiko station. And just behind the Kawaguchiko station a great view of Mount Fuji.
From here, both local trains and local buses depart, including the three tourist buses that with the convenient day pass allow you to visit the major tourist attractions at an affordable price.
A short walk from the station there is the Lake Kawaguchi, where you can walk along, but also take a boat to admire Mount Fuji from the center of the lake. Another spot to admire Mount Fuji is Mount Tenjo, accessible by cablecar from the bankse lake.

In Kawaguchiko there are also several onsen and museums, such as the Kawaguchiko Music Forest, a sort of museum-theme park dedicated to musical instruments. I have not yet had the opportunity to visit it in person, but it is absolutely in my wish list!

Bus: from the stations of Shibuya, Tokyo and Shinjuku (more frequent), about two hours, 2000yen one way to Kawaguchiko. Absolutely the best solution.
You can book seats online or directly at the counters. I recommend starting from Shinjuku and booking from the Highway Buses site.

Train: the Fuji-Excursion, covered by JRPass, ha start the service recently and in a couple of hours connects Shinjuku to Kawaguchiko, but there are only two departures and the seats must be reserved in advance.
The alternative is the Chuo Line express train to Otsuki (covered by JRPass) and then change to the local Fujikyu Railway line at a cost of 1440 yen and a total duration of about 3 hours. 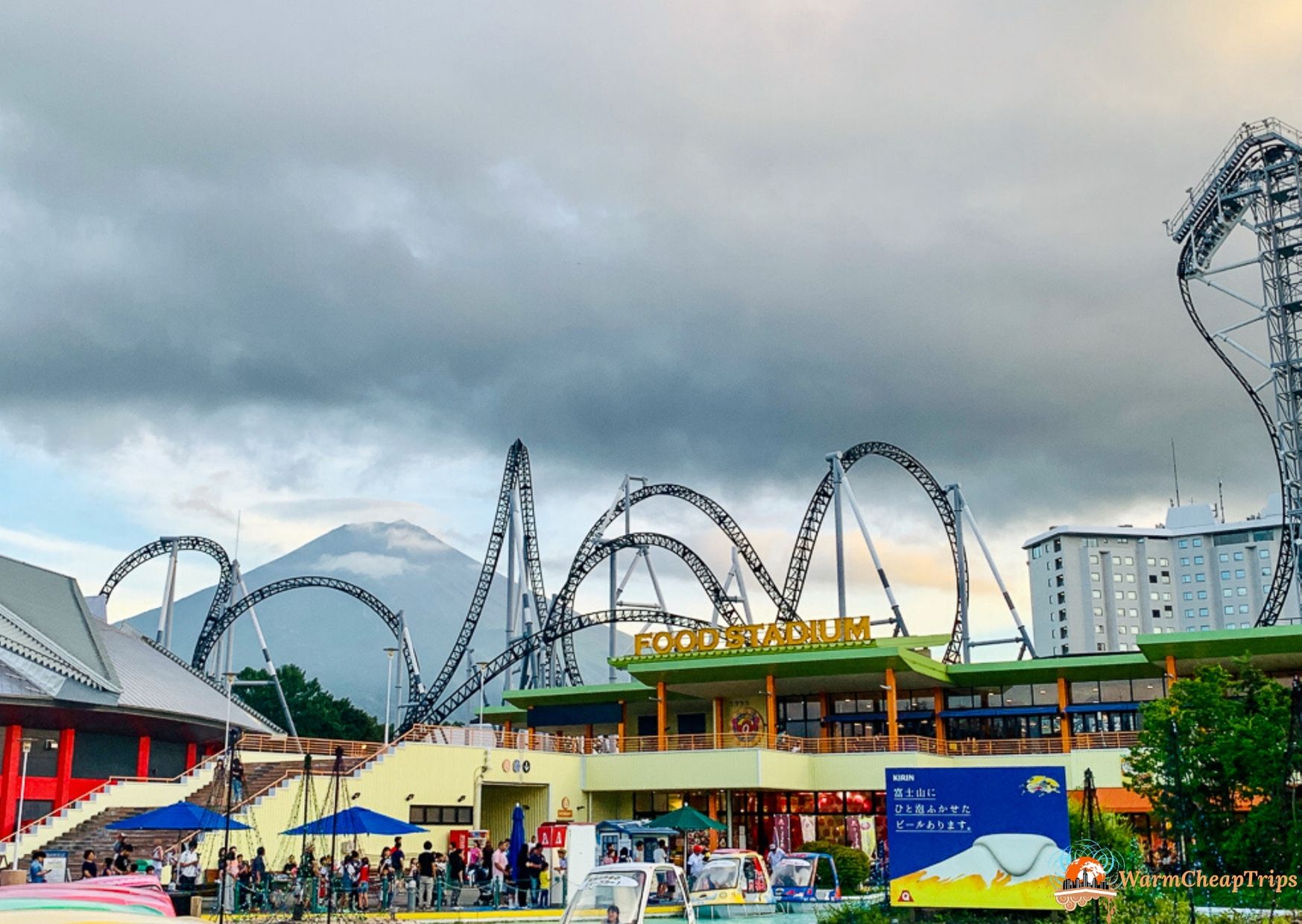 Also in the Kawaguchiko area, at a train stop from the last stop, there is an absolutely unmissable amusement park for roller coaster lovers! In addition to other unique attractions, such as the Village of Naruto or the scariest haunted house in the world, there are 4 roller coasters that have been awarded with the Guinness World Record. I especially recommend you try Eejanaika, a roller-coaster in 4 dimensions that holds the record as the greatest number of spins. SENSATIONAL!
The interesting thing about FujiQ Highland is that it is possible to buy a daily or afternoon pass-par-tout pass.
Or, being free entry, buy the single ride for the desired attraction, which is a great solution if you don’t have the whole day to go to the park, but don’t want to miss out on some specific attractions. All of course, with the view of Mount Fuji in the background!

One of the most famous views of Mount Fuji is perhaps the image of snow-capped Mount Fuji surrounded by a sakura frame and a red pagoda. You can indeed see this iconic image in Shimoyoshida, in the Arakurayama Sengen Park, behind the Chureito Pagoda. Actually, although this image is very famous, the Chureito Pagoda was built only in the 60s as a peace memorial for the soldiers from the region who fell in the Second World War. The main sanctuary, located at the base of the stairway leading to the Pagoda, is instead one of the many Shinto shrines dedicated to Mount Fuji: if you notice the torii they are always oriented towards the sacred mountain.

Undoubtedly this is one of the most popular photographic spots and, especially in the sakura and momiji periods, very crowded. On a sunny Saturday, during full bloom, the line to take the famous photo was over an hour and a half: you enter the group in the fenced area and you have 5 minutes to take all the photos. This explanation takes away a bit of poetry, doesn’t it? But thanks to this system, you can have a nice picture without a thousand people in the middle of ruining it!

Bus: from the Tokyo area, get off at the Chuodori Shimoyoshida highway stop. Once you exit the highway from the gate, follow the signs for 10 minutes on foot.

Train: once you take the local Fujikyu Railway line, get off at Shimoyoshida Station.

There are no buses to/from Kawaguchiko, the only solution is the local train for 310 yen. 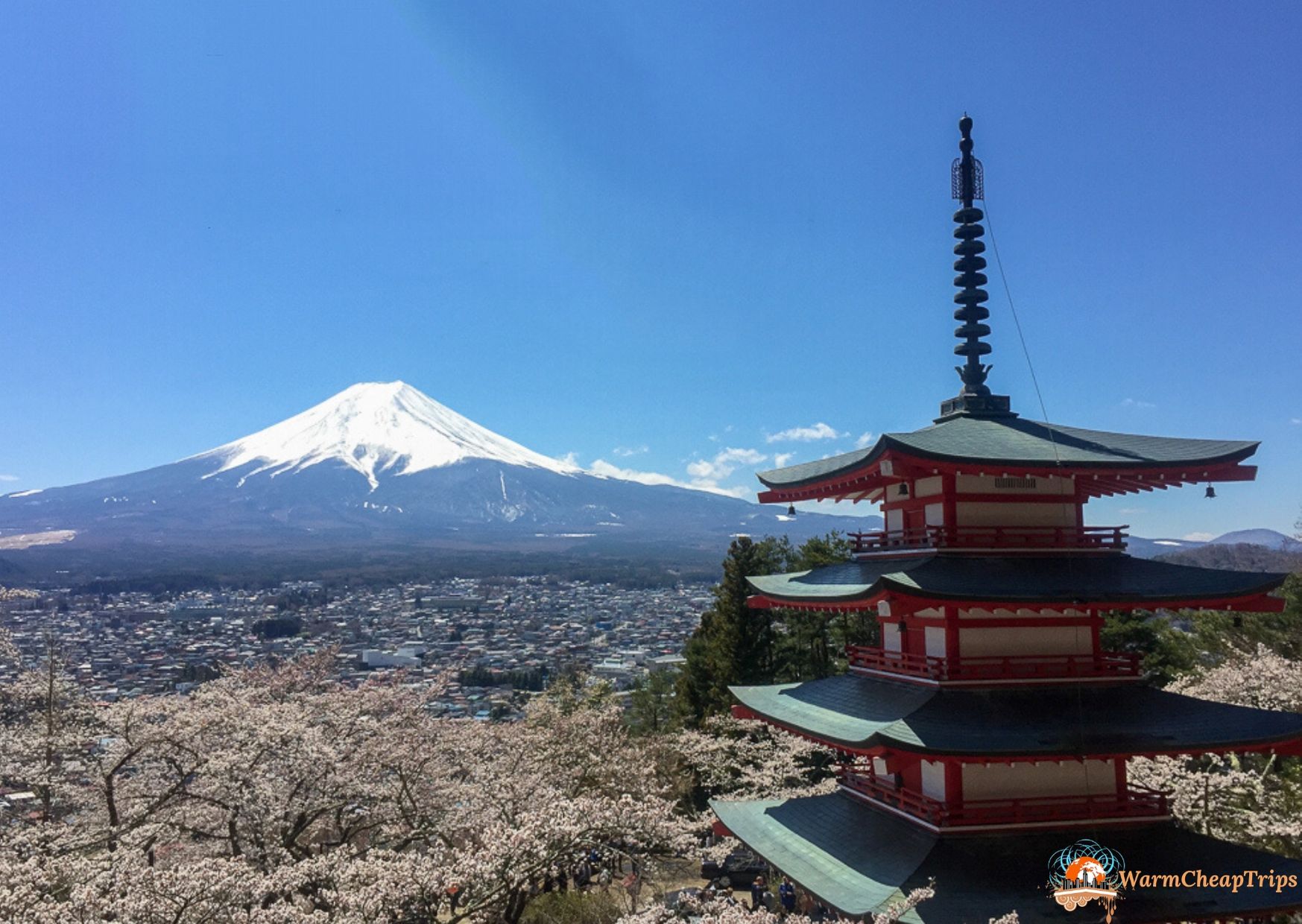 Another breathtaking view of Mount Fuji is the one with a pink expanse at its feet: these are the shibazakura, a pink moss-phlox taht blooms between late April and mid-May. There are several flower fields of this type in all of Japan, but the one in the five lakes region with the view of Mount Fuji in the background is something really picturesque. For more information on this event, I’ll write about in a dedicated post.

In the village of Oshino, the pure waters created by the melting snow of Mount Fuji, flow into 8 ponds surrounded by traditional mountain houses. This picturesque place dominated by the Mount Fuji, is a tourist attraction became Unesco Heritage. In the past the pilgrims came to dive to purify themselves in these crystal clear waters before facing the long climb to the summit. Now the spiritual atmosphere is completely lost, especially due to the bus tours of noisy Chinese tourists, but just get away from the two main lakes surrounded by souvenir shops, to breathe again the magic of this place and be overwhelmed by the majesty of nature.
There is also a small museum which in the traditional peasant houses of the area, tells the story and life in this region. 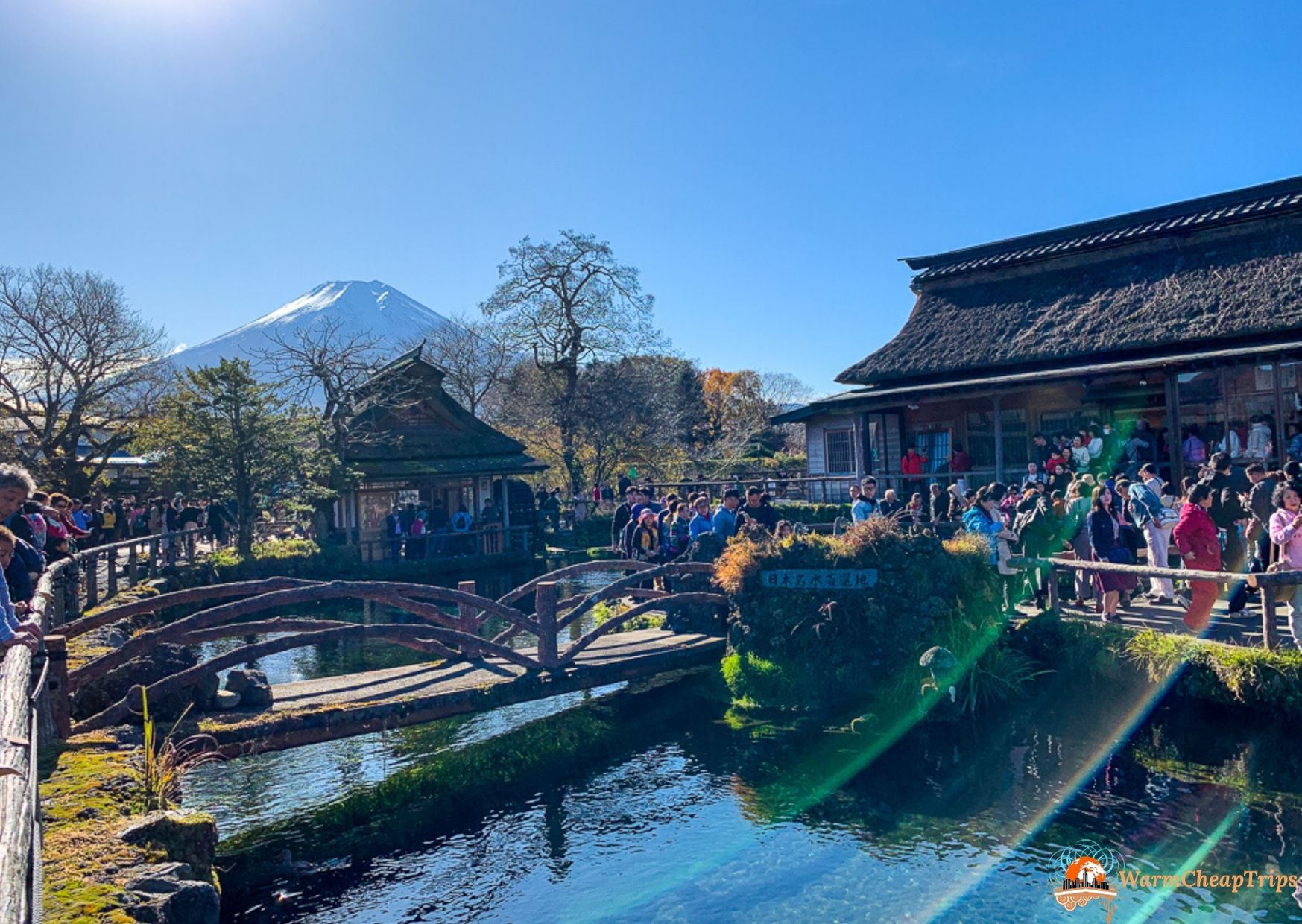 From Kawaguchiko you can see Mount Fuji practically always behind the station. The only exception is in case of severe bad weather, where low clouds greatly reduce visibility, completely covering the summit of Mount Fuji. If the only day you have available for the visit involves severe bad weather, do not despair: from Kawaguchiko station often buses leave for the fifth station on Mount Fuji, which is the highest point accessible by public transport, from where depart one of the most popular paths to climb to the summit in the months of July and August.

Here you will find refreshment points, souvenir shops and the Komitake Shrine, a shrine where in climbing season, you go to pray for a safe climb. From here you can enjoy a beautiful view of the five lakes region and you can also send a postcard with the special Mount Fuji stamp!

Direct bus from Shinjuku, or local bus from Kawaguchiko station.

Often Hakone is numbered among the places from which it is possible to see Mount Fuji, however being more distant than the region of the Five Lakes, the chances of seeing the shy mountain, reduced a lot.
True, from Hakone you can reach the Gotemba Outlet, from where you can see Mount Fuji in the background, but personally I recommend enjoying Hakone for the many beauties it offers, regardless of the view of Mount Fuji. If you are lucky you could still see the distance.
About Hakone however, I will write about it in detail in a dedicated post.

Ikaho Onsen, for your body and your mind

Relive the Battle of Kawanakajima