Think for a while at the lights of Shinjuku, then, close your eyes for about an hour and a half by train and re-open them once you arrive in Sakura, Chiba Prefecture: you will walking through quiet streets between Samurai houses and a bamboo forest less crowded than Arashiyama ones.

Sakura is a quiet town in the Chiba countryside, along the railway that connects Narita Airport to Tokyo. A charming and sleepy village, where even on a warm spring Saturday afternoon only few walk around the street.

During the Edo period, in 1611, Doi Toshikatsu built a castle here (of which now remains the large park) and as a result formed a small castle town with samurai residences, which can still be visited today.
The governing family was not onesthe most important, that’s why the samurai residences appear smaller and less sought than ones can be seen today in other places in Japan. But Sakura City is mostly unknown to tourists (and also to many Japanese) and that’spermit you to immerse fully in the ancient atmosphere, without being overwhelmed by the clamor of tourists.

Sakura City is also an excursion from Tokyo particularly indicated for the flowers lovers (on the other hand with a name of the kind, could it be otherwise?) Thanks to the numerous blooms in its parks and its countryside, where there is also a beautiful windmill donated by the Netherlands that in April is surrounded by colorful tulips.

The city of Sakura is located in Chiba Prefecture, about 20 minutes from Narita and Chiba and about an hour from Tokyo. It is surely not a very famous destination, but if you want to see the Japanese reality of the countryside and you love Japanese culture, expecially samurai history, it is a step that I strongly recommend.

Is the most important Museum of Japanese History, where research is still carried out and where is possible to see a large exhibition with interesting explanations not only about the history of Japan from the beginning of the Kamakura Perios to the economic boom of the “Bubble” and the present day, but also sections dedicated to traditions, legends and matsuri and souvenirs from the different areas of Japan. The division of the sections and the presentation of the contents is similar to the one in the Edo Tokyo Museum in the Ryogoku district in Tokyo (another museum that I absolutely recommend visiting if you are passionate about history), but it is even more complete and explains the history of the whole Japan. An audio guide is included in the admission ticket and the entire visit takes well over two hours, which pass quickly due to the large amount of interesting material displayed!
Admission: 420yen adults – 250yen university and high schools students – free under 15 years
Opening Hours: from 9.30 to 17.00, closed on Monday and from 27 December to 4 January 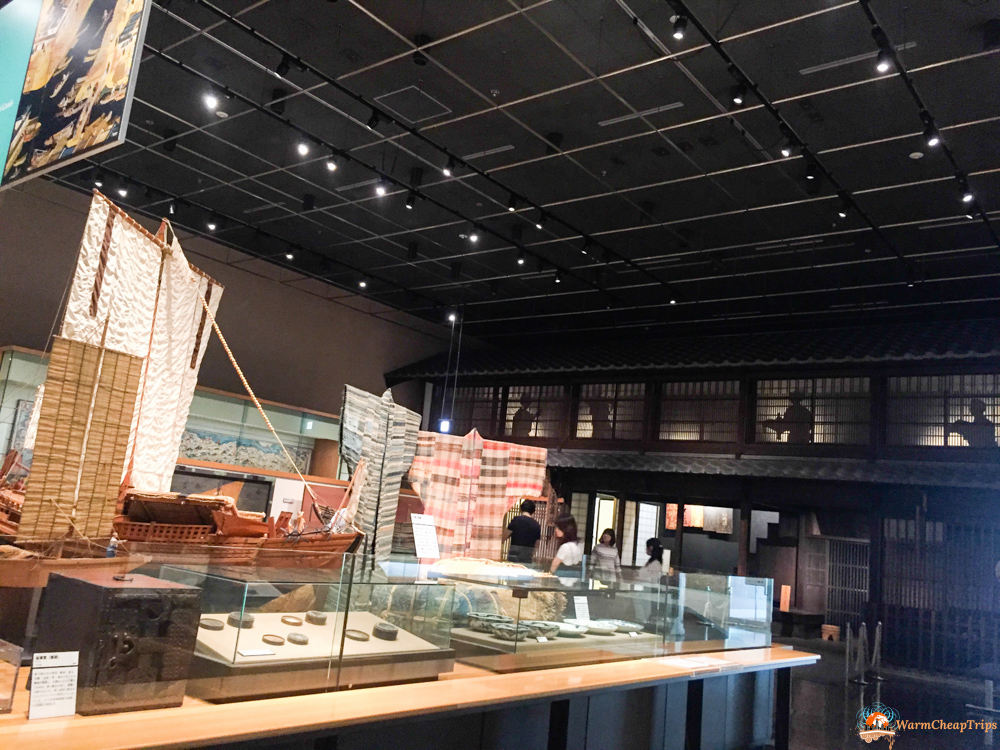 Unfortunately, of the Sakura Castle, which was considered one of the 100 most famous castles in Japan, there is nothing left except the beautiful big park where you can relax on the grass or walk among its paths. The Sakura Castle Park is located next to the Japanese Museum of History and in June it is filled with beautiful iris, as well as cherry blossom between the end of March and early April.
Here is also a nice tea house, where you can taste the matcha for only 400yen, but I found it closed without any explanation…

A little more than a kilometer away from Sakura Castle Park you can visit what was once the Samurai residence area. An area that still today is rich in greenery and some views have remained almost unchanged. There is practically no car and the shade of the trees shelters from the sudden heat of a spring Saturday. Only the sound of the wind accompanies the thoughts and the imagination runs free accompanied by some whisper in Japanese of the few visitors and residents of the place. The Samurai district of Sakura City still has several Samurai houses, some inhabited and not open to visitors, while three are open to the public.
The three samurai houses of the Kawara, Tajima and Takei families can be visited and in addition to seeing the small gardens, you can also visit the interiors where objects of everyday life are exposed.

Nearby is also the Samurai Forest, a lovely garden with several fruit trees, bamboo and a lovely pond, where the Samurai of the city loved to walk.
Admission: three ticket housing 210yen adults, 100yen students – free Samurai Forest
Opening Hours: from 9.00 to 17.00, closed on Mondays – Samurai Forest open from Thursday to Sunday

To reach the Samurai discrict you have to walk through Hiyodorizaka, an old Samurai slope surrounded by bamboo with an incredible charm! The word “suggestive” is too limited to describe the atmosphere of this corner of Sakura that I particularly loved.
If you are looking for a bamboo forest alternative to the always crowded Arashiyama, you will go crazy for this place!

A short walking distance from the Samurai houses, you can also stop at the Makata Temple, a small temple loved by the Samurai, who went there often because it is said to protect the city of Sakura and the Samurai themselves. 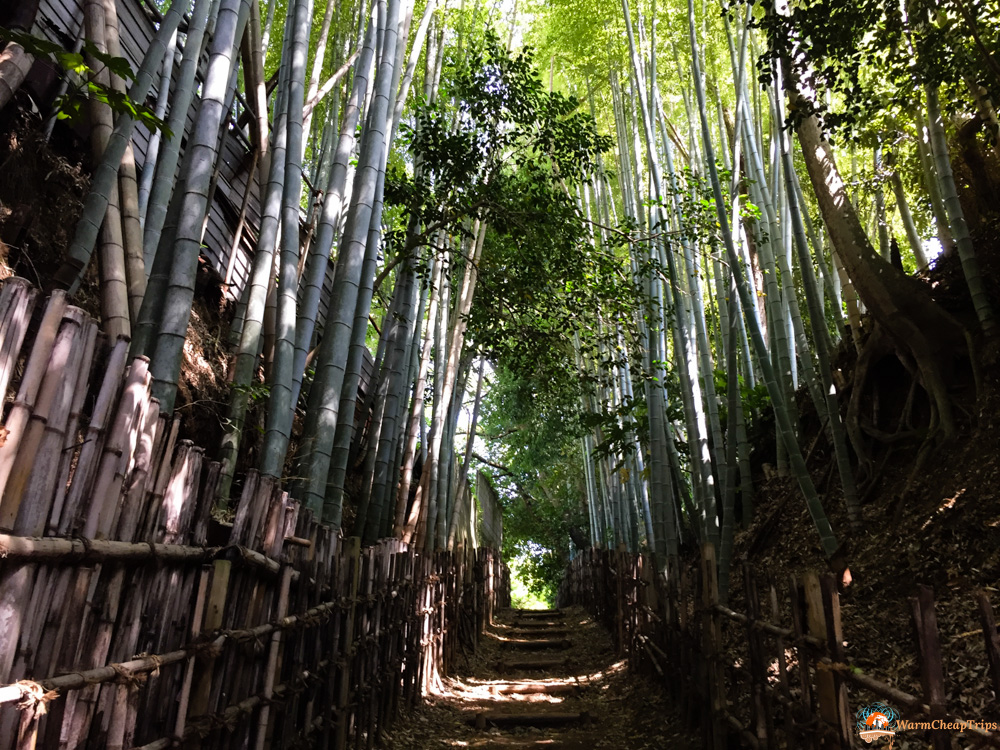 On the opposite side of the city of Sakura, at a distance still within walking distance, are the beautiful garden and the house of the last feudal lord of Sakura, Masamoto Hotta. The residence is one of Japan’s best-preserved traditional feudal style houses. About fifteen rooms with walls of different colors and decorations, created according to the style of the time. A small internal garden can be admired from some of the rooms, while a larger garden surrounds it. Actually, the current park is only a third of the original Lord Hotta’s garden!
Admission: 320yen adults – 160yen students
Hours: from 9.30 to 16.30, closed on Monday

The city of Sakura can be visited by walking or to optimize the time you can choose to rent a bike for only 500yen per day, so you have more time to enjoy this lovely day trip from Tokyo.

Between the campaigns of Sakura on the Lake Inba, a couple of kilometers from the station and along the bike path that runs along the river, lies this large area dominated by a windmill donated by the Netherlands.
Every year here, in April, we witness the flowering of thousands of colored tulips that during the Sakura Tulip Festa can also be collected by visitors.
In summer, however, the show of sunflowers and fireworks on the lake attract many Japanese and some rare foreign tourists, while in October are the colors of the cosmos cheering up this beautiful park. 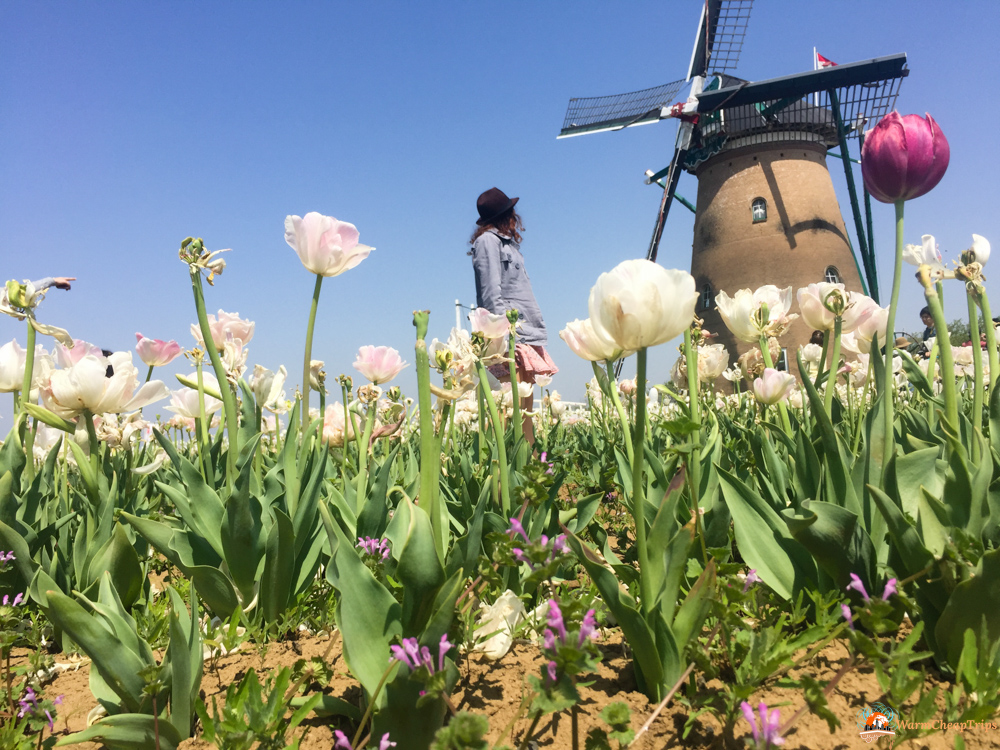 Sakura City is served by both the railways JR Sobu Line and the Keisei Line connecting Tokyo to Narita.

The two stations, Sakura JR and Keisei Sakura are 2 km from each other, but the main attractions are equally distant.
Personally I found the Keisei Line more comfortable, taking the express train to Narita airport, starting from Ueno or Nippori for something less than 1000yen one way.

Kyoto in one day, perfect itinerary to the main spot