If the tales of feudal Japan, of clashes between samurai and stories of honor, fascinate you, you will surely know the story of the 47 Ronin.

Fictionalized and revisited in a fantasy key, this story was made famous in the Western Countries thanks to the homonymous film (not really connected to the real story), but here in Japan, the original and truthful story is handed down from generation to generation and every day the temple where the 47 Samurai without a master rest is visited by people who come to pay their respects.

The 47 Ronin Temple remains a little out of the classic Tokyo districts visited by tourists, but if you are a fan of the history of Japan it is a spot that I warmly invite you to include in your trip, not only for the beauty of the place but also for the important meaning of the history of these loyal men.

Sengakuji and the tale of 47 Ronin

Sengakuji Temple is one of the most important Buddhist temples in Japan. Belonging to the Zen-Soto sect it is the third most important temple after Eiheiji and Sojiji and still today is a destination for pilgrimages, retreats and study sessions for monks, scholars, and practitioners.
The temple was built by Ieyasu Tokugaka in 1612, near the castle of Edo, but after only 30 years it was destroyed by fire and rebuilt in this area. Actually, the main hall was rebuilt after the Second World War, like almost all of Tokyo. 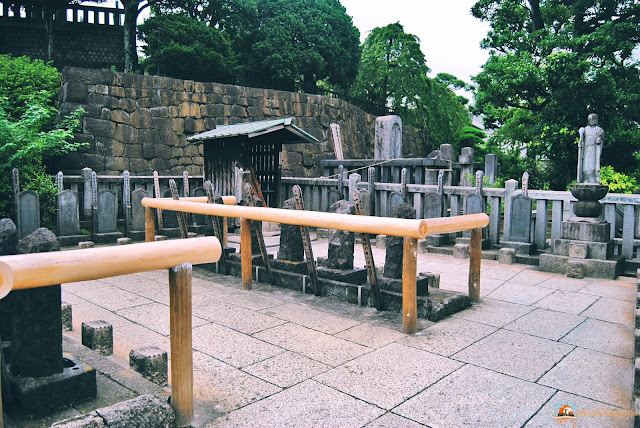 Despite the Sengakuji being one of the most important Buddhist temples, its fame is mainly linked to the history of the 47 Ronin and the Lord of Ako, who rest here. Their tombs are visited every day by Japanese devotees and by some tourists fascinated by this story.
This episode is so important and famous because it is the maximum expression of the Code of the Samurai: the loyalty of these men towards their Lord, is a milestone of the Samurai culture and fundamental section to understand the development of the subsequent Japanese society, that also after the Meiji restoration has preserved an essential part from the Samurai code.

In addition to the small cemetery with the graves of the 47 faithful samurai and the grave of Lord of Ako and some members of his family, it is also possible to visit a small memorial museum where you can watch three short videos of the total duration of 15 minutes.
If you have the time, the entrance to the room with the 47 Ronin wooden statues is included in the entrance price of the museum, for each of which the name, age, role and pay are indicated.

The story of 47 Ronin

The year 1701, under the Tokugawa shogunate, in a period of peace between Japanese clans.
But the honor and respect of social conventions are still the basis of Japanese society, and Bushido is the essence that pervades the honorable warriors who protect their masters.
These years of apparent calm is partly due to the obligation imposed on the various Daimyos, to stay in Edo for a good part of the year, away from their possessions and their families, basically, hostages, to avoid revolts and guarantee peace.
Among these nobles, there was also the lord of Ako, Asano Naganori, who was placed under the instruction of Kira Yoshinaka, court master of ceremonies to comply with the label requested at the Shogun court.
For education tuition, Kira required a sort of reward, although he was of a lower rank than the Lord of Ako, but following Asano’s indignant rejection, he began to treat him with rudeness and contempt until the incident that triggered the reaction of Lord Asano he sought to kill the master of ceremonies Lord Kira.
The act did not hit the mark, but, due to the rule of the time, an armed attack inside the Edo Castle needed to be punished. So the Lord of Aka was forced to commit seppuku, ritual suicide.
With death, the possessions of Asano were requisitioned and the Samurai at his service was given the order to disperse, thus transforming them into Ronin, Samurai without a master.

47 of these Samurai, however, did not accept the unfair fate of their Daimyo and start to plan revenge for that dishonor wrongly caused to the Lord of Aka. For two years they took to the bush, to the unruly life and started new activities, so as not to make Kira suspicious, who with time became less and less concerned about being protected by a large escort of soldiers.

In the winter of 1703, the Ronin captained by Oishi Kuranosuke, Asano’s main vassal, raided Kira’s home and, once found him, they headed him (he was offered honorable death with seppuku, but Kira did not answer and was not granted additional time).
The Ronins then took Kira’s head to the Senkakuji Temple, showing it at the tomb of the Lord of Aka, finally avenged.
There was much discussion about the fate of the 47 Ronin and finally, it was decreed that they must do seppuku, a common act of honor that generally the Samurai made when their master died and they were then buried here, at Sengakuji together with their master to whom they had shown so much loyalty. 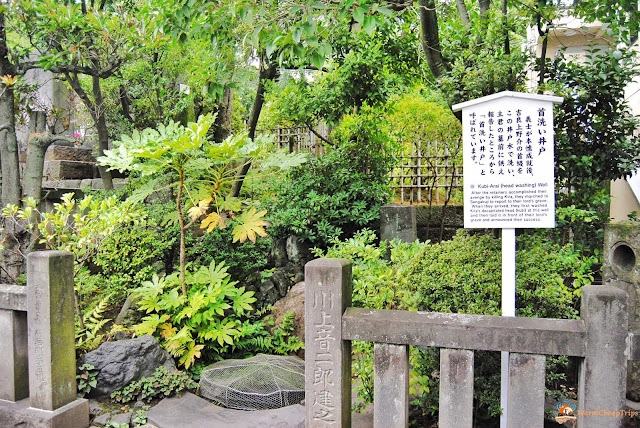 The 47 Ronin or Sengakuji Temple is located in the Minato district, almost on the border with Shinagawa. The nearest metro stations are Sengakuji (Toei Line and JR Yamanote Line) and Shirokanedai (Tokyo Metro, about 1 km away).
It is open every day from 07.00 to 18.00 from April to October, while it closes at 17.00 in the winter months and entry is free.

In mid-December, a festival in honor of the 47 Ronin is held at Sengakuji Temple and the nearby streets are filled with food stands and events.

Shibu Onsen and the onsen hopping near the Snow Monkey Park

Along Kiso Valley – Walking on the Nakasendo between Magome and Tsumago