Verona is known all over the world as the city of Romeo and Juliet, and actually is also a great city to visit in one day, eventually on the road to Venice. You can also combine it with a day in Brescia, my city, and discover two beautiful Italian cities.
If you have more days available, I recommend you to visit Lake Garda, several buses will take you to pretty towns such as Lazise or Bardolino, or by train, you can reach more well-known towns such as Peschiera, Sirmione and Desenzano.

One day in Verona, walking itinerary

Verona is a UNESCO World Heritage Site, small and easily to visit on foot in one day, very well organized also as public transport.
In my opinion, the best way to visit the city is on foot, among its pretty alleys and photogenic spots.

If you intend to enter museums or attractions, I recommend the Verona Card, available for 24 or 48 hours from activation, respectively € 20 and € 25. In addition of the free use of buses, you are entitled to free admissions in several plces, such as Arena, Juliet’s House and Torre de ‘Lamberti.

I have prepared for you a map with the one-day itinerary of the main things to do in Verona; it’s a circular itinerary, so it can also be followed in the opposite direction or by an attraction of your choice, especially if you are overnight near a different place than my starting point.

The first stop is Piazza Bra (A), the largest square in the city, where the symbol of Verona is located, the Arena. In Christmas time there, the Christmas Markets are located here.
The original Roman amphitheater was partially destroyed by an earthquake in 1117, but owes its present form to a second earthquake in 1183. In the summer season, theatrical performances and concerts are headed here, in this unique atmosphere. The entrance is 10€ and is open from Tuesday to Sunday from 11.00 to 17.00.

Moving further you arrive in Via Mazzini, the shopping street of the city, at the end of which you will see Piazza delle Erbe on your left. But first, turn right for the inevitable stop at Juliet’s house (B).
Entire walls covered with notes of lovers and prayers of those who are still looking for love and in the center the bronze statue of Juliet who will bring luck in love to those who touch her right breast. Actually I heard that men should touch her right arm, but I ask the experts for confirmation!
From the free access courtyard you can also see Juliet’s balcony, and the spectacle of the tourist on duty who praises the famous lines “O Romeo, Romeo, why are you Romeo?” it’s kindly offered.
Here too, it is possible to enter and visit the interior of the house for €6, from Tuesday to Sunday 8.30-19.30 while on Monday from 13.30. 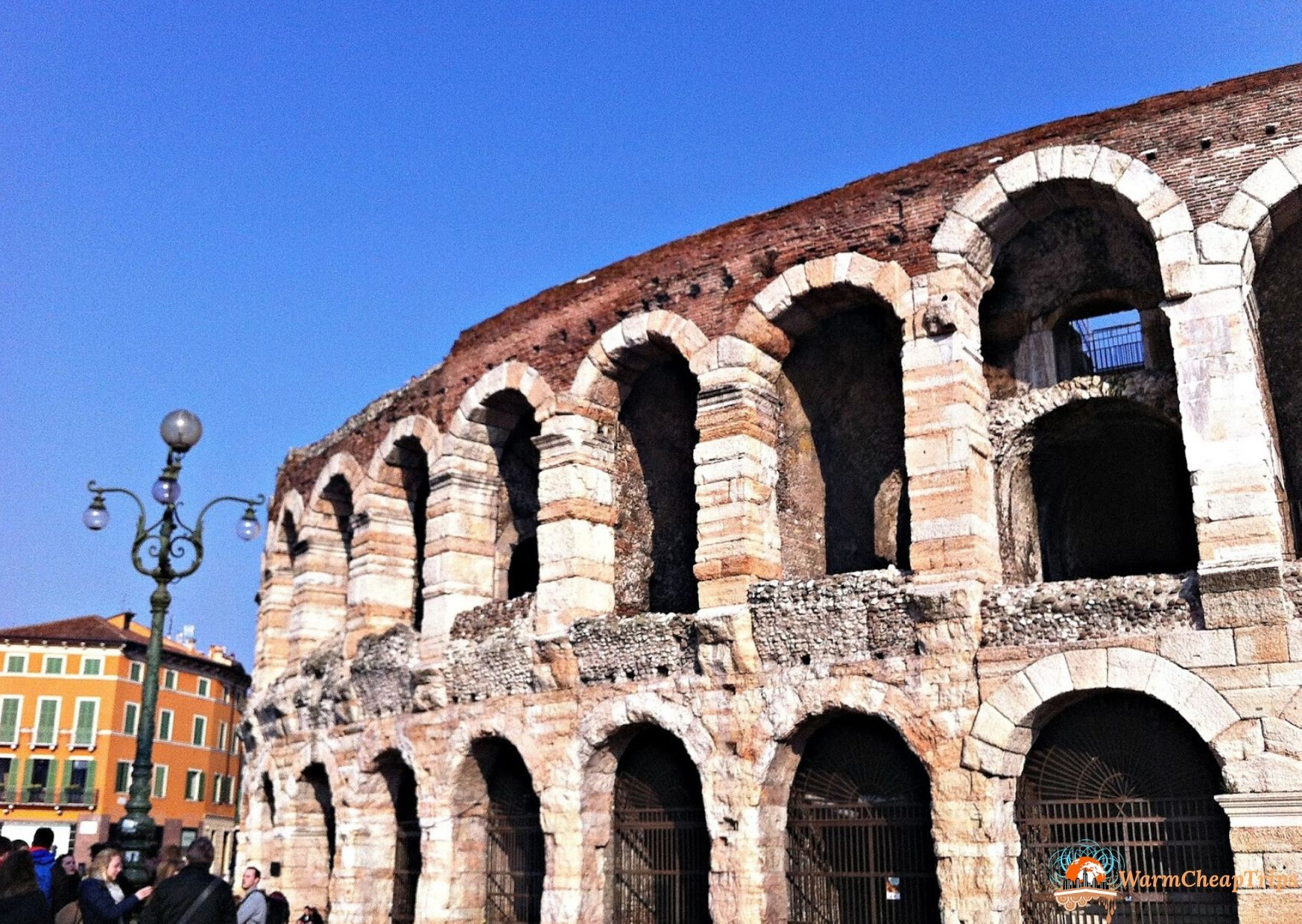 Come back on your steps to then reach Piazza delle Erbe (C), the oldest and most suggestive square in the city, and according to research from 2012, one of the most beautiful in the world.
In Roman times the Forum stood here with spas, temples and shops; in the period of the Scaligeri Family it was the artistic and economic exchange center and still nowadays, is the place of week market.
Starting from your right is the Palazzo della Ragione, for centuries the center of the city’s political power, dominated by the Torre de’ Lamberti (D) erected in 1172 by the homonymous family which with its 84 meters in height is the tallest tower in Verona (€ 8, open Monday to Friday from 10.00 to 18.00 and the first weekend of the month 11.00-19.00).
The House of Judges connects to the Town Hall through the Arco della Costa: according to popular belief this rib had been lost by the devil, but in reality, it is a simple whale rib used as a “sign” by one of the spice and merchandise stores that in the Middle Ages overlooked the square.
The eastern side of the square ends with the Mazzanti houses, famous for the lively mythological frescoes on the facade, which represent Ignorance, Prudence, Envy, Providence and the fight between giants.
Palazzo Maffei and Torre del Gardello stand on the north-western side of the square and the six mythological statues on the elegant balustrade deserve particular admiration.
In the center of the square is the Fountain of Madonna of Verona.

After turning right for the Torre de’Lamberti, continue in that direction, towards the river, passing in front of the Arche Scaligere (E), the funeral complex of the Scaligeri family.
The walk then continues along the Adige River, crossing the Stone Bridge (F), until you reach the square of Saint Peter’s Castle, after climbing a few steps ….
The view over the city and the Adige is truly beautiful and the light breeze will refresh you after the climb, while you rest on the benches to admire Verona. 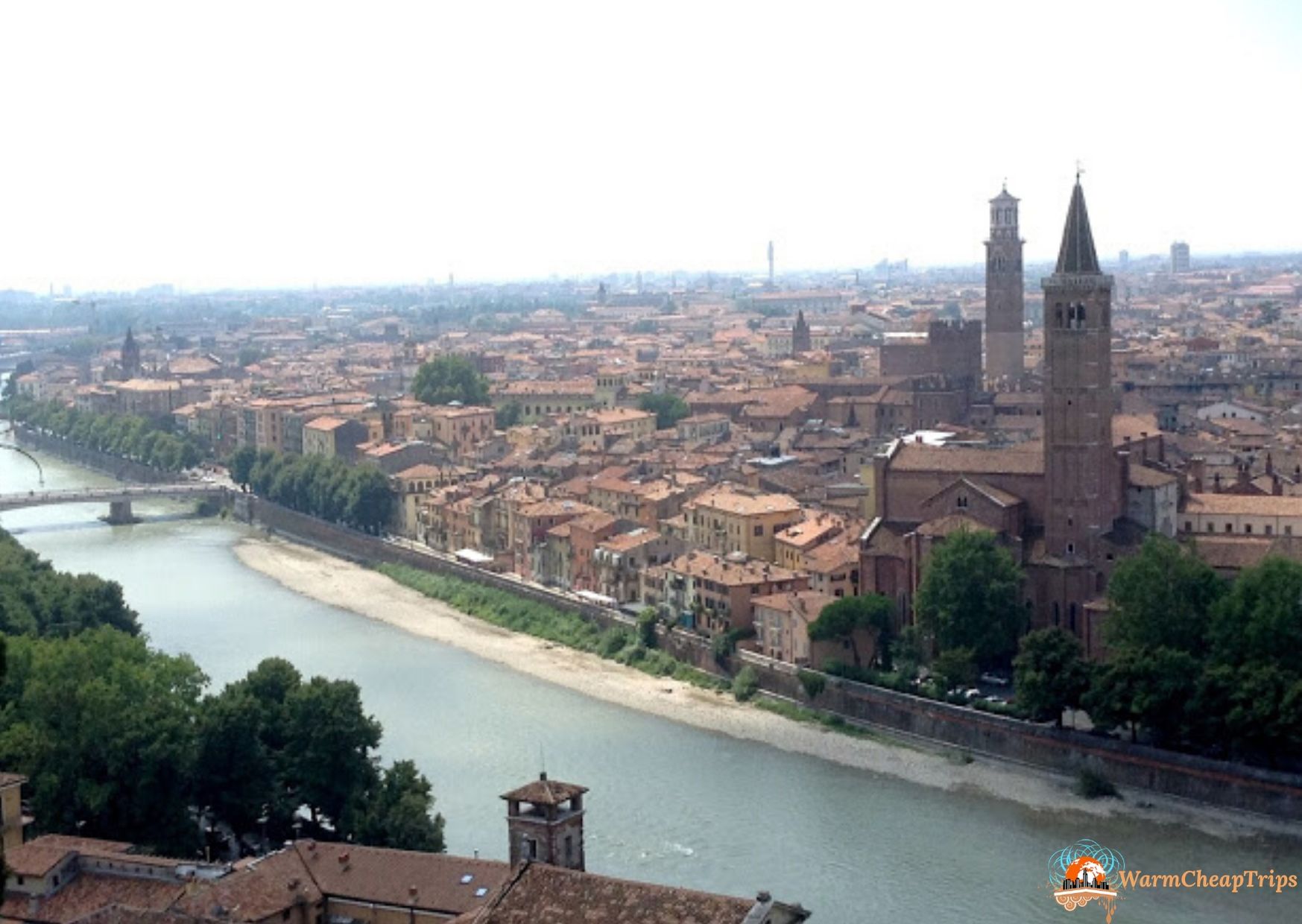 Along Adige River and churches

Once rested, go down and cross the bridge again, the next stop will be the Cathedral of Verona (G) dedicated to Holy Mary. A walk along the river allows you to reach Castelvecchio (H), the Scaliger castle built around 1350 which today houses the city’s Civic Museum, €6, every day from 8.30 to 19.30 except on Monday which opens at 13.30.
We then cross the beautiful and particular Castelvecchio Bridge, celebrated by historians as “the most daring and admirable work of the Middle Ages in Verona”. The original bridge was destroyed by bombs during the Second World War, but was later rebuilt faithfully to the original.
If you need a break you can rest in the shade of the plants of Piazza Arsenale or go down to the banks of the Adige.

The one-day itinerary in Verona continues along the Adige Riverside, up to the next bridge which once crossed leads you to the splendid Basilic of San Zeno (I), with its famous doors with bronze panels.

From here you can conclude your tour by returning to Piazza Bra, but if you are staying in the city or you still have the opportunity to spend the evening in the city, I recommend the suggestive Via Sottoriva (*), originally called  Vinemakers alley, where you can treat yourself with an happy hour with Spritz! 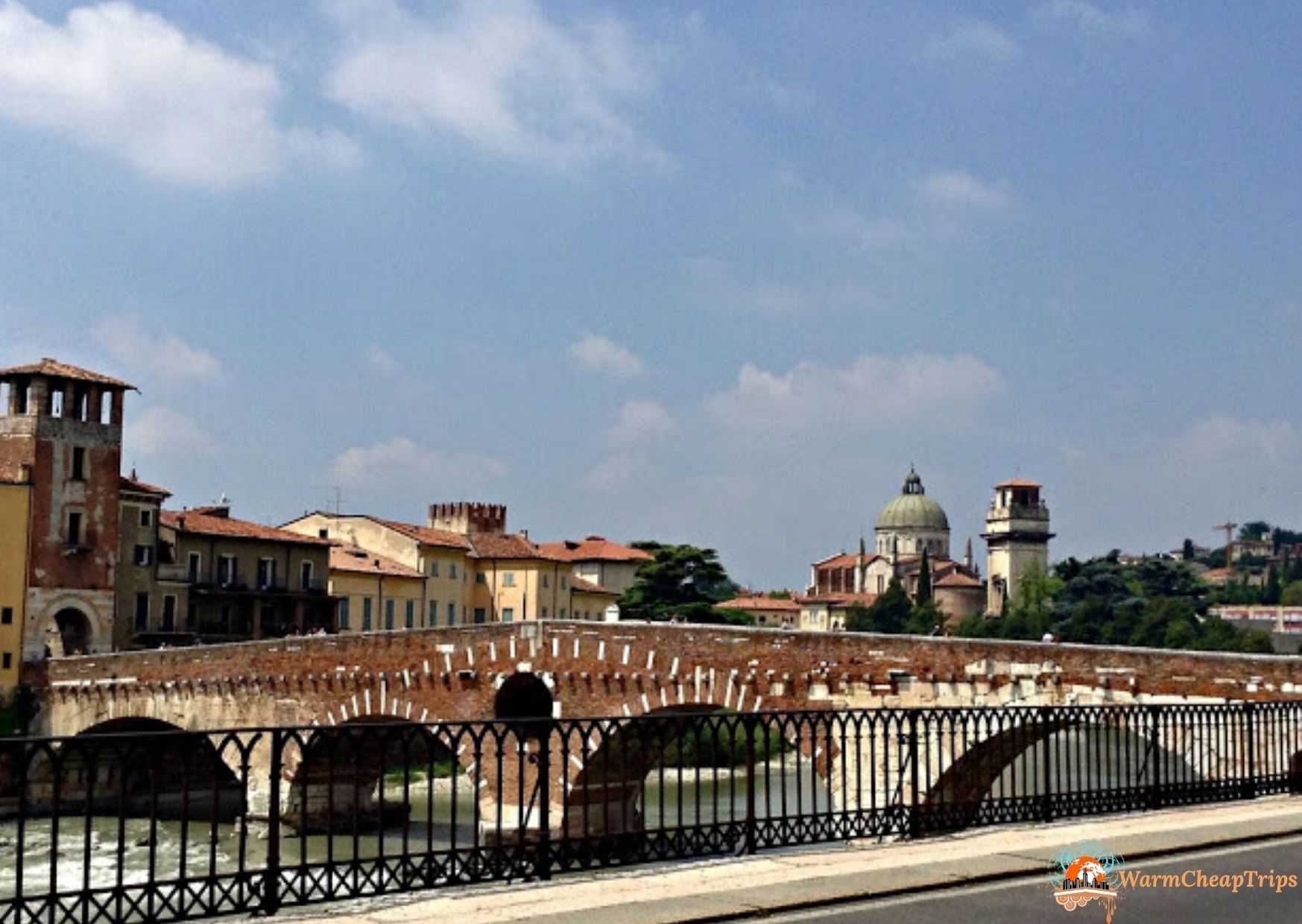 How to get to Verona

In Verona there is an airport and it’s connected to the Porta Nuova Railway Station by a shuttle bus operating from 5.35 to 23.30 (€6 one way).

By train you generally arrive at the Porta Nuova Station, from where numerous and frequent buses leave for Piazza Bra, which can also be reached with a 15-minute walk. While from Porta Vescovo the walk is about half an hour, but not tiring at all.

If you arrive by car I recommend you park at the free parking lots of the Bentegodi Stadium (Piazzale Olimpia), where buses leave every 15 minutes or you can walk for 20/25 minutes passing in front of Castelvecchio.
There are also free parking spaces at Porta Vescovo Station, but they are not many and you need to have a little luck to find a place.