Among the most suggested daytrip from Tokyo (Hakone, Nikko and Kamakura), Kamakura is the option that I usually recommend, both because is the easier to visit from Tokyo, but also because it is full of interesting things to see and with a very relaxed and many different from other places in Japan.

Kamakura is most famous for the Great Buddha of Kamakura, but this is certainly not the only reason to visit it! This pretty town is a coastal area, full of hiking trails in the mountains, many Buddhist temples and full of beautiful gardens and nature.

Thanks to the many things to do and see, Kamakura can be an easy day trip from Tokyo, but you can also spend a few more days stopping to stay in a minshuku or return to visit Kamakura several times, on a further trip to Japan.

For its position and geographical conformation, protected on three sides by hills that offer a splendid view of the ocean in front, Kamakura was the capital of the Yoritomo shogunate during the Kamakura period (1185-1333), a period of wars and intrigues during which we can say the Samurai figure has consolidated.

I have been to Kamakura several times, some as a guide, others for interest, making somewhat unusual routes to visit other lesser-known temples than the classic tours. For this reason, I would advise everyone to visit Kamakura, even to those who have already been there once, trust that there is a lot to see! 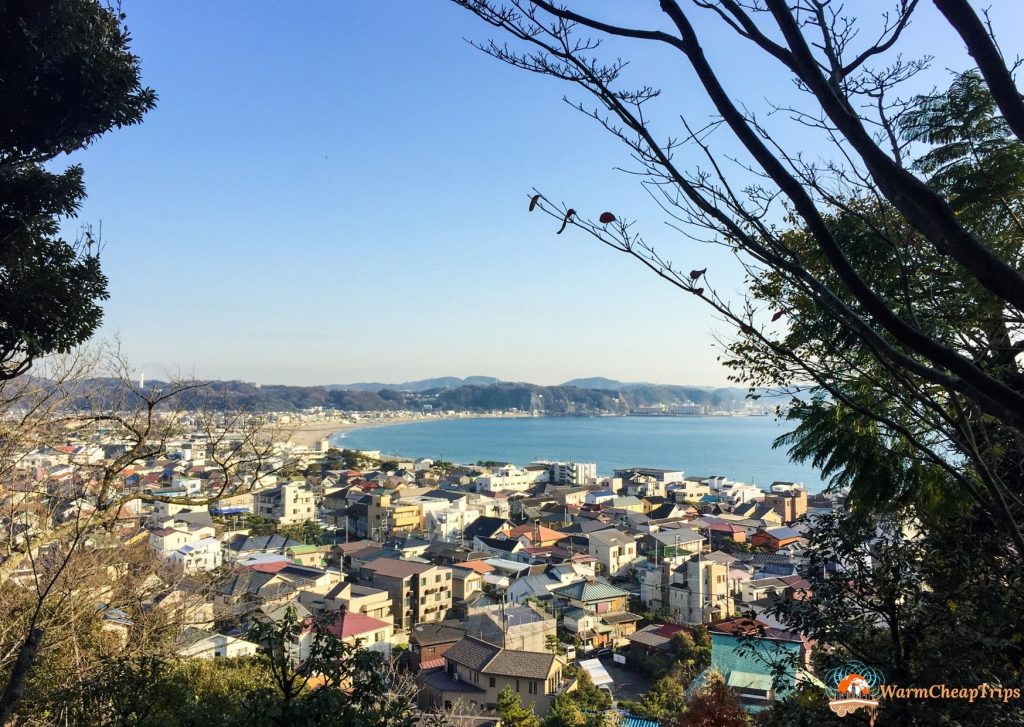 Things to do in Kamakura – the unmissable stops

Certainly for the first visit of Kamakura, there are some classic and unmissable spots, which represent the main highlights of Kamakura. Generally, although Kamakura is an excursion much loved by tourists and residents, even the main attractions are not overcrowded (excluding some periods in correspondence with events or blooms, as I explain below), so you will be able to visit Kamakura breathing the typical tranquility of a seaside town!

The Daibustu, or Great Buddha, is the symbolic image of Kamakura and the most famous of the things to do in Kamakura. This majestic 14 meters of height statue is second only to the Great Buddha of Nara and is located inside the Kotoku-in temple, in the Kamakura area closest to the sea. The statue was in the past kept inside, in a wooden structure that was blown away by a tsunami in 1495 and since then the Great Buddha of Kamakura has stood out in the open air, proud and impassive.

A short distance from the Great Buddha of Kamakura is one of my favorite Kamakura temples, the Hase-dera. The temple is known above all because it houses a statue of Kannon of over 9 meters and a golden statute of Amida of 3 meters, but it is also very suggestive for the hundreds of Jizo statues, protectors of travelers and unborn children, from the seraphic aspect that are scattered everywhere on the whole area of the temple.
Inside the Hase-Dera temple there is also a splendid Japanese garden with ponds with koi carp, bridges and waterfalls, as well as a splendid panoramic walk from which you can enjoy a splendid panoramic view of the sea and the bay, which in rainy season is filled with beautiful hydrangeas! 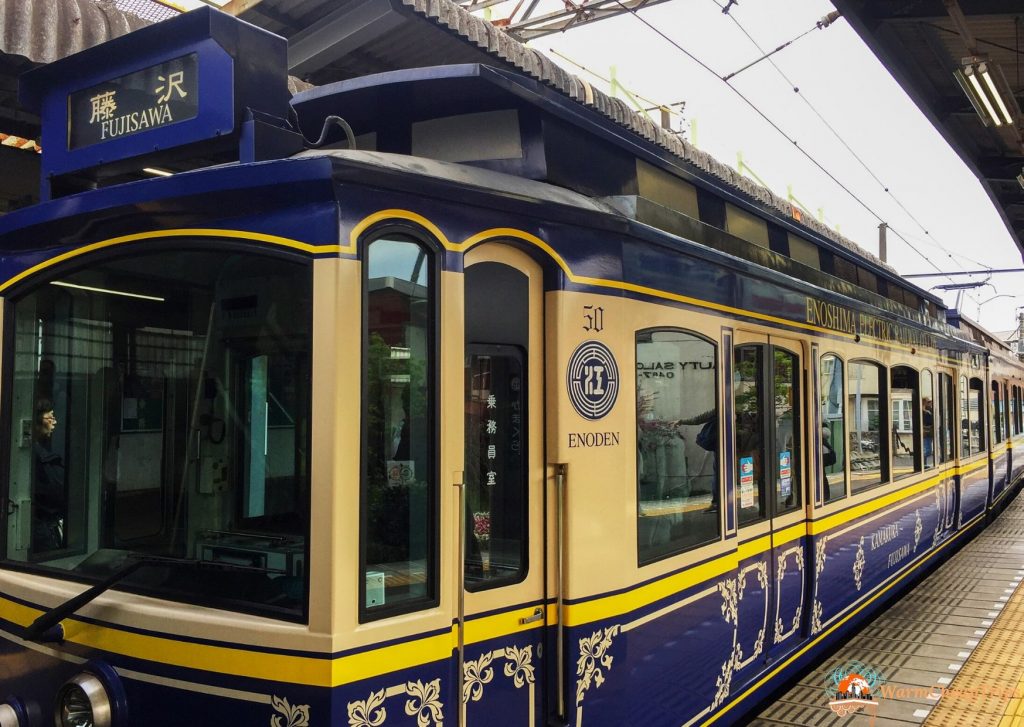 You can’t visit Kamakura and miss the Enoden train, the pretty retro electric train that rattles between Kamakura and Fujisawa, passing through Enoshima and along the coast, offering splendid views of the ocean.
You can take a ride on the Enoden train to admire the coastal landscape or even use it to move between the stations of Kamakura and Hase as an alternative to the bus: in this section, no view of the sea, but you will pass between the pretty houses with Kamakura garden, having a glimpse of the everyday life of the locals on a train ride that will be very different from a train ride in the center of Tokyo!

Read also: Enoshima Island and the legend of the dragon

The Hokokuji Temple itself is nothing exceptional and is also slightly off the classic path, so if you have limited time, you could also skip it. However, I would like to include it in the things to do in Kamakura for its suggestive bamboo forest, especially if your trip to Japan doesn’t include visiting Arashiyama in Kyoto.

The Hokokuji bamboo forest is small, but still very impressive. Also in this temple, you will have the opportunity to take a break sipping a cup of matcha while admiring the bamboo in peace. 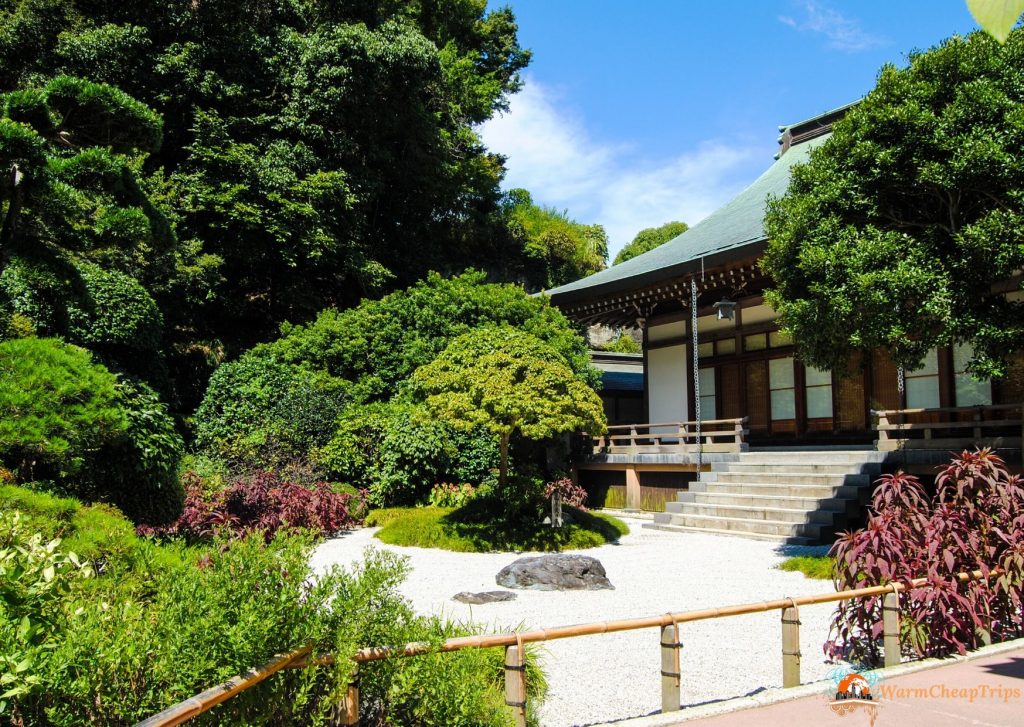 Kamakura is famous for its important Zen temples, concentrated mainly in the Kita-Kamakura area. If you are visiting Kamakura for the first time, I advise you not to visit all these temples, perhaps risking losing the other things to do in Kamakura, is better instead choose one, maximum two, to visit.

My advice is definitely the Kenchoji Temple, the most important Zen temple, as well as the oldest in Kamakura. The temple area is very large, although very small compared to the original area, and walking among the buildings is extremely relaxing. It is also possible to enter the main Hojo building, where Zen meditation cushions are available and behind which there is a beautiful garden designed by a Zen master. In this temple classes of zazen, zen meditation are also organized, generally Friday and Saturday in Japanese and once a month in English.

Continuing behind the main building you arrive at an observation point from which several hiking trails start and from where on clear days you can also see Mount Fuji.

Opening hours: every day 08.30-16.30
Admission: 500 yen
How to get there: 20 min walk from Kita Kamakura or bus from Kamakura Station / Tsurugaoka Hachimangu

The most important Shrine in town, Tsurugaoka Hachimangu, is one of the must-sees of Kamakura, but personally I recommend visit it as last stop of your tour in Kamakura, simply because it stays open longer than the other attractions.

The Tsurugaoka Hachimangu Shrine is a historically important place, because it is dedicated to the god of war, and therefore of the Samurai, consecrated by Minatomo no Yoritomo, and because the third Shogun Minamoto was murdered here, a key event that led to the end of the Kamakura period.

The Sanctuary is accessed through a long tree-lined avenue and staircase from which you can enjoy a splendid panoramic view of Kamakura and also see the sea on clear days.

Opening hours: every day 05.00-21.00
How to get there: from Kamakura station, walking along the shopping street 15 minutes, or 5 minutes by bus. 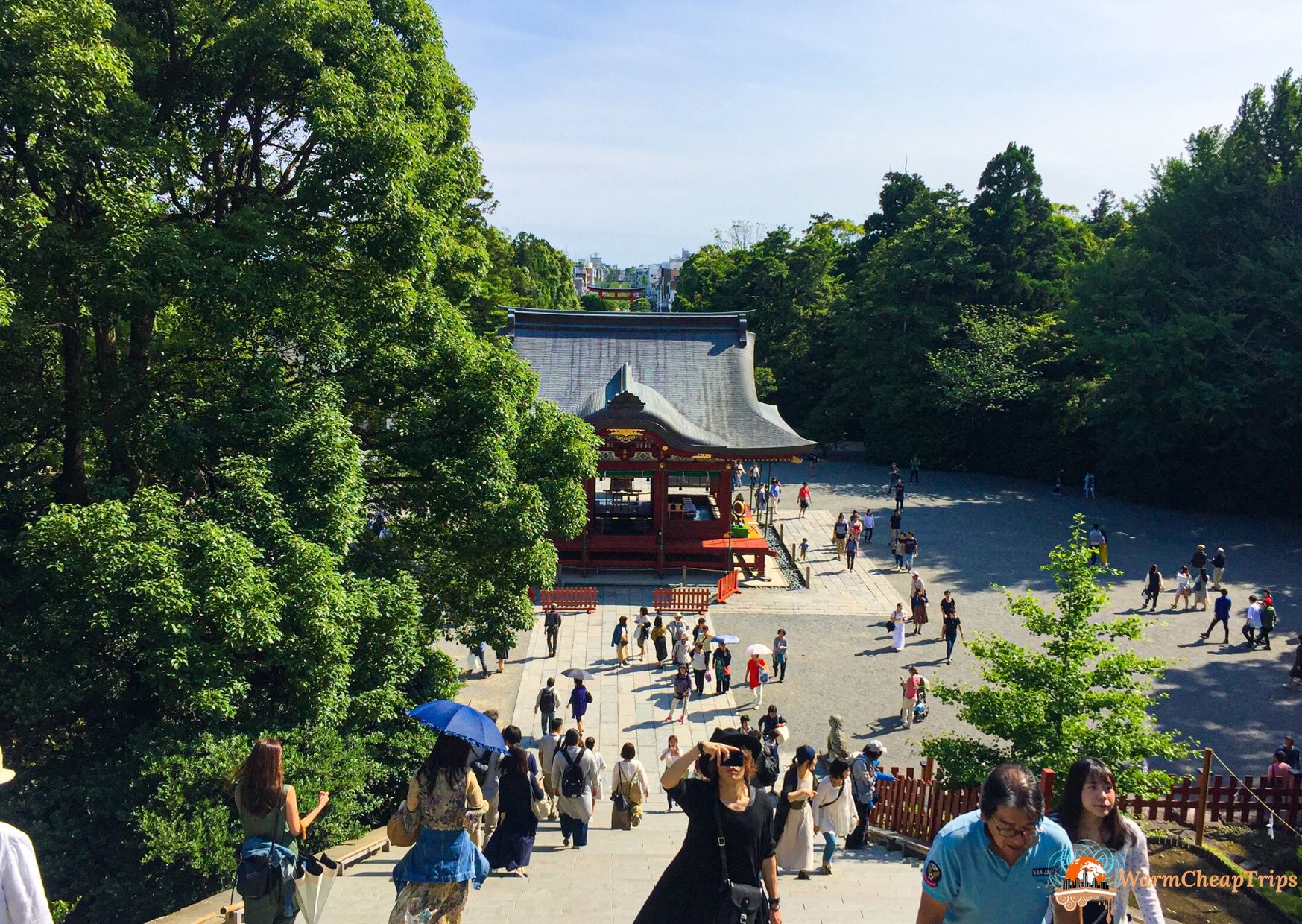 Visit Kamakura: other things to see

The places listed above are the unmissable stops for a day trip from Tokyo, but if you decide to stay here or if you want to visit it for a second time, there are many other things you can visit in Kamakura!

Other temples of Kita Kamakura

In addition to the aforementioned and recommended Kenchoji Temple, the area of ​​Kita Kamakura is rich in temples, especially Zen. Surely among them, the most famous is the Meigetsuin, with its circular window overlooking the splendid back garden. Also known as Ajisai-dera, temple of hydrangeas, Meigetsuin is one of the best places in Kamakura to watch the hydrangea bloom during the rainy season.

The Engakuji temple, is one of the best spots to admire the autumn colors, as well as being the second most important Zen temple in Kamakura, and it houses a national treasure bell.

On the opposite side of the railway there are also the Tokenji and Jochiji Temples, also Zen, the first of the two dedicated to women who have suffered painful violence or divorces. 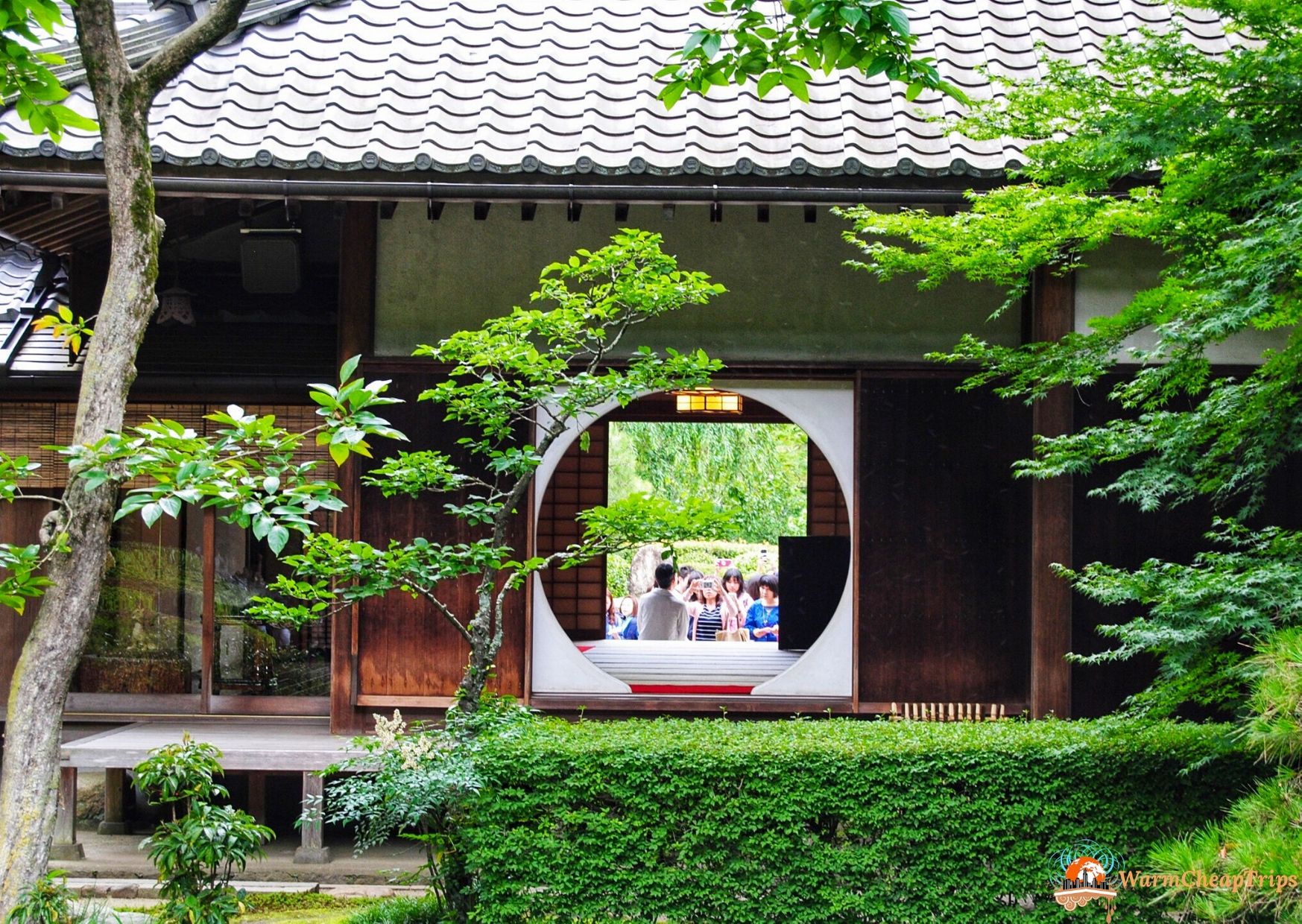 Kamakura is the ideal destination also for hiking lovers, thanks to the many paths immersed in the nature of its hills. Many trails connect different temples, which can also be reached easily by bus, but the Zeniarai Benten Shrine can only be reached by following one of these hiking trails. Why do I recommend this Shrine to you? Well, partly because I love walking in Japanese nature, but also because in this Shinotist shrine there is a spring of clear water that it’s sais will double the money washed here!

Setted in Sagami Bay, Kamakura offers also swimming beaches, although they are not of top quality. Kamakura’s beaches are loved above all by surfers, young people and those looking for a convenient seaside destination to reach from Tokyo and Yokohama. Personally, however, I do not recommend choosing Kamakura for a day at the beach, better go for example to Sarushima, but maybe you can take a dip after exploring the city.

Ajisai, the blooming of Hydrangeas

The rainy season in Japan, which runs from mid-June to mid-July, can be quite annoying for travelers, but if you are traveling to Japan during this period, be sure to visit Kamakura: the blooming of hydrangeas in temples such as Meigetsuin or Hase-dera is something absolutely wonderful.

Visiting Kamakura during the Ajisai bloom certainly requires a lot of patience, the Japanese love blooms and expect to find long lines to enter especially these two temples. 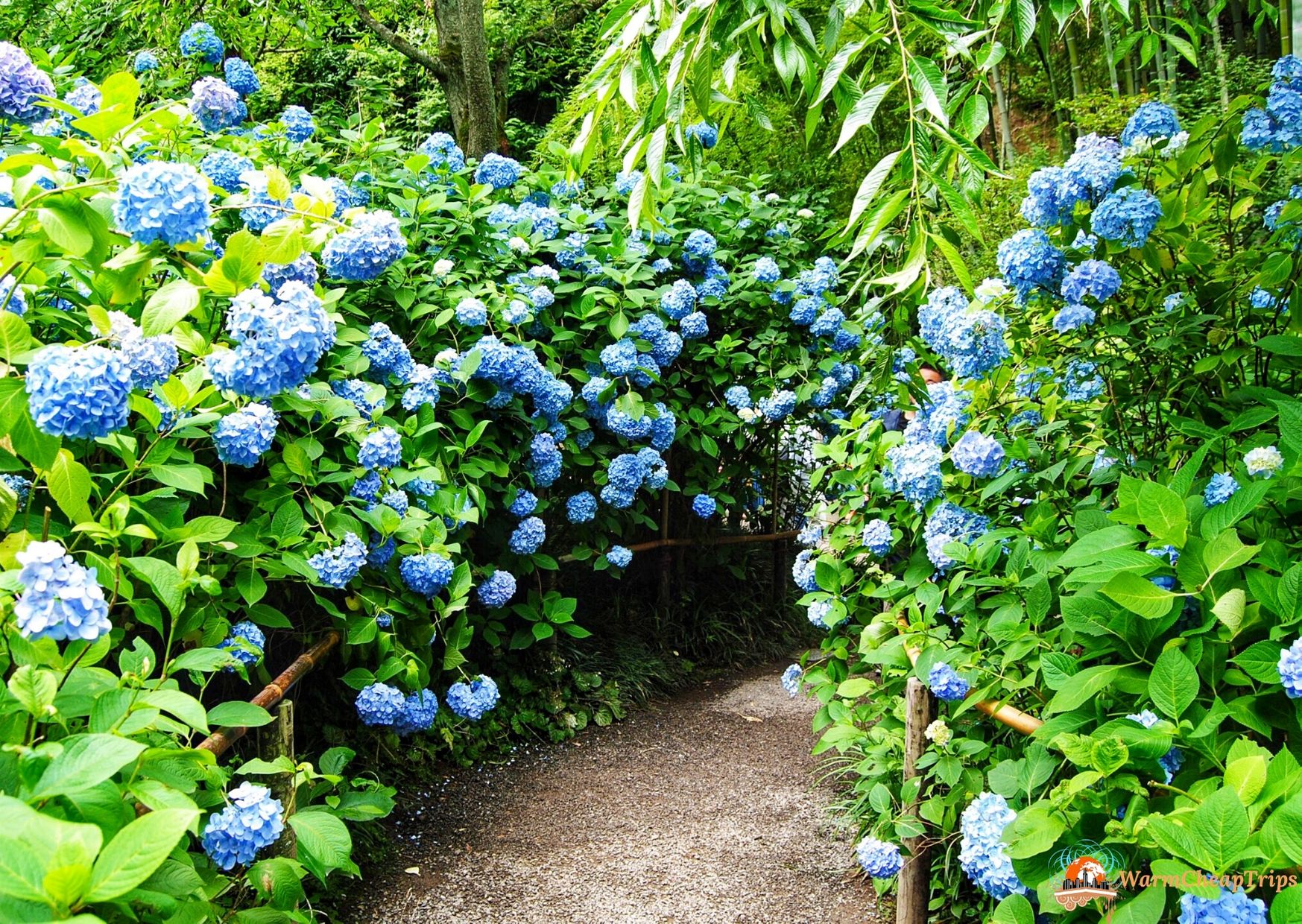 I recommend you start your visit from Kamakura station, stopping at the Infopoint to collect the free city map and buy the bus and Enoden train day pass for 600yen.

Then move immediately to the Hase area, so as to avoid the bus tours that start to download hordes of tourists from the late morning to the Big Buddha.

I recommend having lunch in Komachi-dori, the main shopping street of Kamakura, where you will find many restaurants offering shirasu, whitebait, Kamakura’s specialties.

Tour in Fukushima, see the reality 7 years after the accident