Kaohsiung must definitely be included on a trip to Taiwan, is the city that I liked most among the three I’ve visited and on the next trip I will definitely spend another couple of days there. In addition to several points of interest, Kaohsiung is also an excellent base for moving to the Kenting Nature Park and beaches and several other destinations in southern Taiwan.

I admit that when I was planning my itinerary in Taiwan, I had included the stop in Kaohsiung mainly because I wanted to photograph the colorful temples at the Lotus Pond. But in Kaohsiung there is much more to see, and is also a city full of good vibes. Kaohsiung is a coastal city, and Cijin Island is the perfect destination for dip in the ocean.
In Kaohsiung I also found many more English-speaking people, despite being a city almost unknown to mass tourism (especially western) and in general, the atmosphere and people are very relaxed and more open than in Taipei. 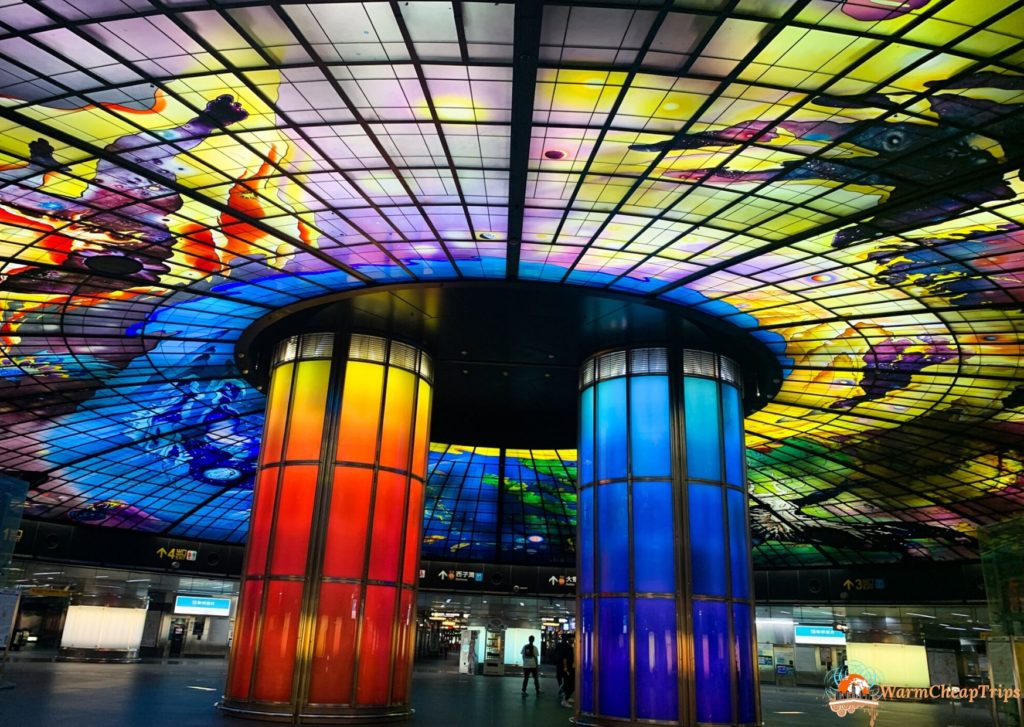 We spend in Kaohsiung 3 nights with a day trip to Tainan, but you could easily stop here for a week, thanks yo the many things to do that Kaohsiung offers.

Even in Kaohsiung, like in all Taiwan, street food and night markets are a must, very popular not only among tourists, but especially among locals. The most famous are the Liuhe Night Market, in the center and close to Formosa Boulevard Station and the Riufeng Night Market, the largest in the city, not far from the Lotus Pond.

Read also: Top 10 things to do in Taipei

Where to sleep in Kaohsiung

We stayed at the J-Hotel, just over 5 minutes from Kaohsiung Station, which offered breakfast, and snacks are available all day (even if we only taste them the first evening, after arriving directly from Taipei and having eaten only an obento on the train). Small but very comfortable room with new bathroom and fridge available with water, tea and sweets. Excellent value and laundromat with free detergent, bicycle rental service, convenient mini-market equipped with all at 20 meters. Price 2,553 TWD for three nights.
The location, actually, is not so convenient. Better than Kaohsiung Station, I recommend staying near Formosa Boulevard (which in any case is less than half an hour on foot from the J-Hotel) or even the Zuoying area, especially if you plan to travel a lot outside from the city center.
Another area that I enjoyed walking around is the port area where there is also a City Suites Hotel, a chain that I used and appreciated in Taipei. 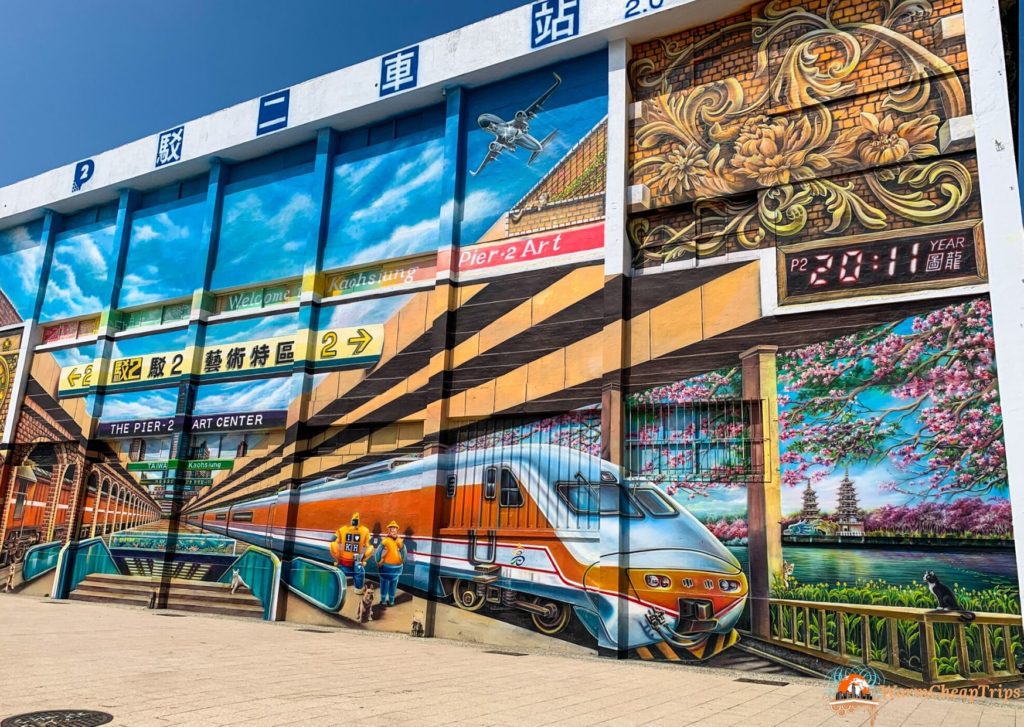 Things to do in Kaohsiung

Definitely the reason why I had initially added Kaohsiung as an unmissable stop on my itinerary in Taiwan, the Lotus Pond is definitely one of the most Instagram-able spot in Taiwan. An artificial lake surrounded by absolutely kitsch and colorful temples. A place created specifically for tourism, but I challenge anyone not to be amazed by this mix of color and exaggeration, perfectly integrated with the tradition of the temples. An unmissable place in Kaohsiung, you are going to spend here a lot of time, taking a thousand photographs at this incredible place, more similar to an amusement park than a sacred place!

The most famous temple is surely the Dragon & Tiger Pagodas: two seven-storied pagodas wrapped respectively by a dragon and a tiger, where entering the dragon’s mouth to get out from the tiger’s one, bad luck turns into good luck.

Next, there is the Spring and Autumn Pavillon, with another dragon and tin with many turtles, while a little further, the giant statue of a Taoist god dominates the Zuoying Yuandi Temple. But don’t look only towards the lake, also on the opposite side of the road there are several colorful temples, although soberer than those in the body of water. At the northern side of the lake, surrounded by a pleasant park, there is the Confucius Temple of Kaohsiung, soberer and smaller than the Confucius Temple in Taipei. 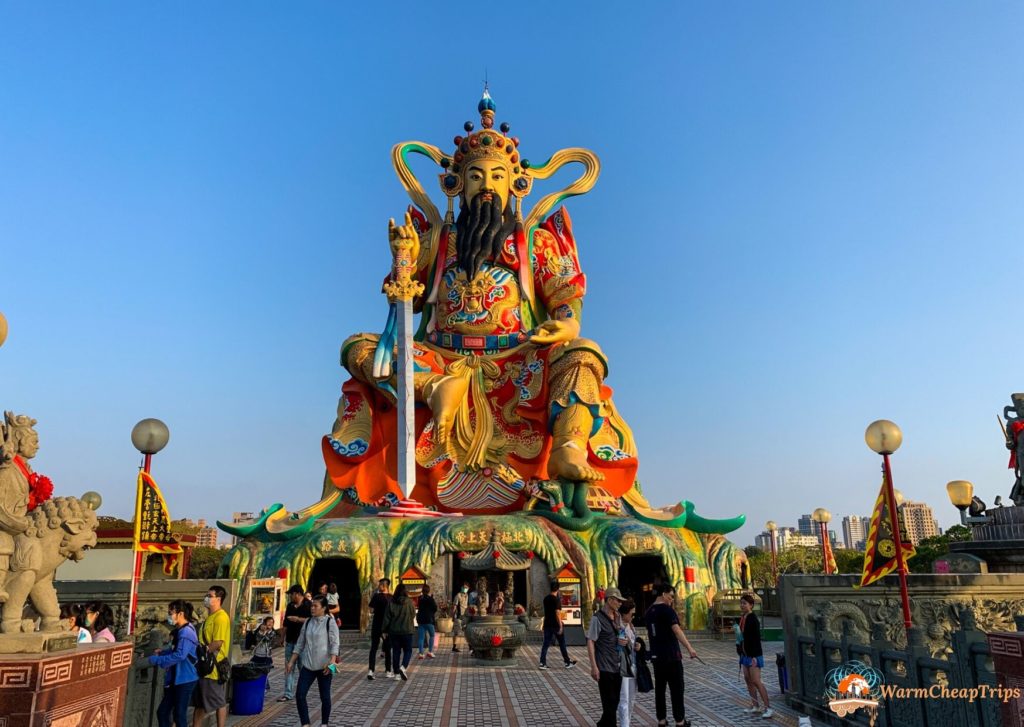 The Love River is the river that crosses Kaohsiung from north to south for 15 km. There are some scenic spots for romantic walks and it is also possible to join a boat ride. Many restaurants with outdoor tables make it very pleasant to spend an afternoon or an evening here.
The most photogenic area is near the Ambassador Hotel, where a show of dancing fountains takes place in the evening.

A 26-meter-tall golden Buddha, a complex with various displays, temples, and gardens, but also universities and volunteer homes. Fo Guang Shan Monastery is the largest Buddhist temple in Taiwan and home to Humanistic Buddhism, founded by Hising Yun and dedicated to respecting the environment. A place where you can breathe peace, where you will feel your energies rebalance and a great positivity will fill your heart. The part of the Museum is a large courtyard lined with pagodas containing shops, information panels and displays on humanistic Buddhism, and at the top the large Buddha statue.
The entire complex is completely free, including the museums in the various sections and if interested you can take a book for free on this doctrine, written by the founder and available in several languages, including English.
There are several restaurants and tea houses, almost all of which offer vegetarian meals, as per Buddhist doctrine. For more information, I refer you to the excellent site of the Fo Guang Shan Buddha Museum.
Other than the museum area, you can also walk freely in the area of ​​the monastery itself, among several temples and prayer areas but also among buildings for the activities and life of the volunteers. For those interested, it is also possible to overnight in one of the dormitories or participate in volunteer periods.
Fo Guang Shan Monastery takes an abundant half-day and is 40 minutes by bus from Xin Zuoying station. The bus costs 180 TWD, but there are shared taxis for 200 TWD. We use it for the return trip so we didn’t have to wait almost an hour for the bus and we had a great time, having the whole car just for us! 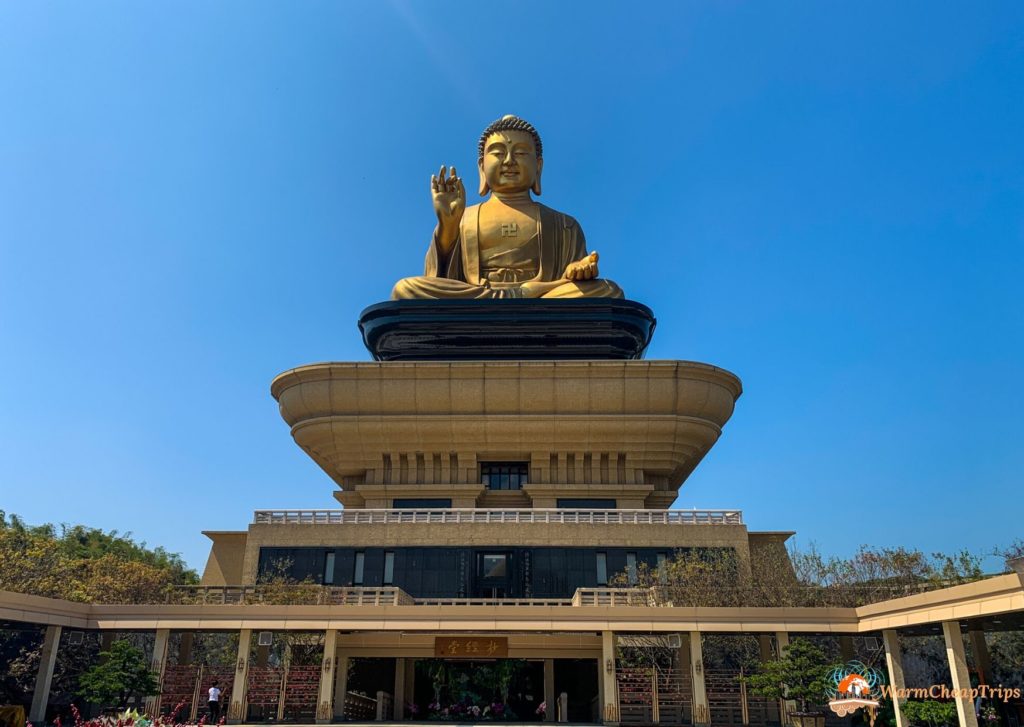 For street art lovers Taiwan is a destination full of stimuli and interesting places dedicated to this type of art. I don’t like so much, I admit it, but I visited the Kaohsiung Pier-2 on my way to the port and I can only confirm that it is an area worth a visit, definitely not to be missed if you are a street art lover. A former abandoned industrial area, occupied by artists and finally transformed into an area dedicated to art, full of murals, sculptures, and art installations.

For 40 TWD, in 15 minutes by ferry from the Pier-2 area, you reach Cijin Island, where I recommend renting a bicycle for 100 TWD and spending some time on the beach.
Yes, because here, crossing the main street full of shops and street food, you will reach the beach.
Part of the beach is allowed swimming, but in most areas, it is not possible to swim because of the dangerous currents. At the beginning of March, it was still slightly cool to take a full dip and we limited ourselves to a few steps in the water, but already from mid-March, the swimming season begins.
A walking and cycling path runs along the seaside, between palm trees and sheds where you can sit to admire the ocean.
Here too, the sobriety of Kaohsiung is not lacking, with the colorful Rainbow Church (not approachable when I went there) and the shell museum with the giant shell. 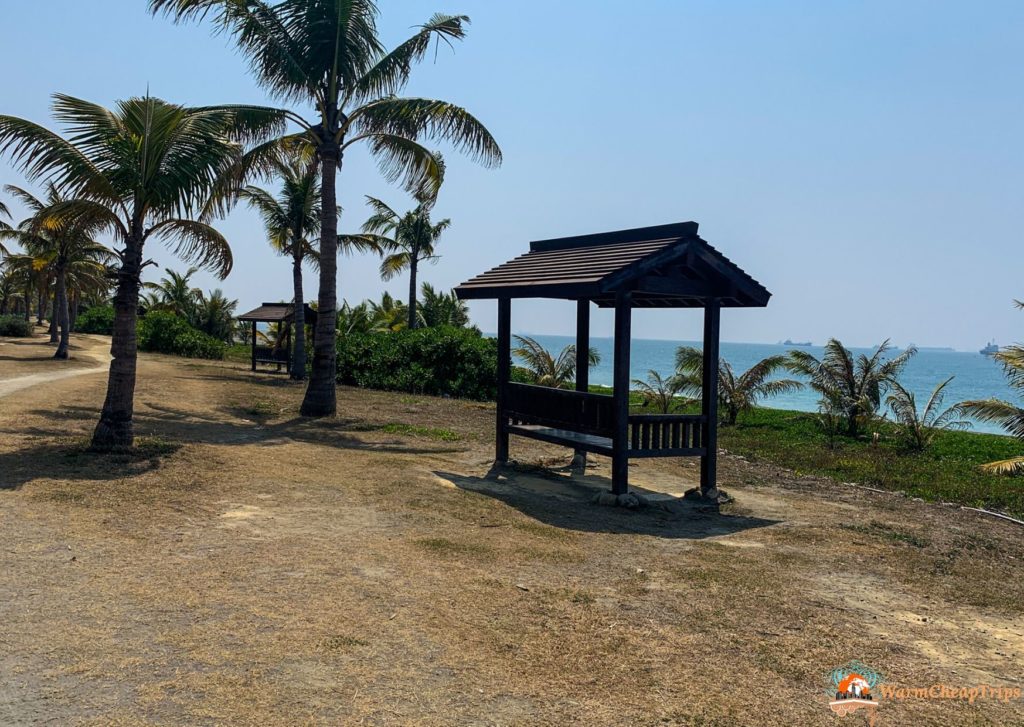 As I anticipated, Kaohsiung would deserve more than a couple of days and in fact, I didn’t have enough time to visit Monkey Mountain, a hill just outside the city, where the Macaques live. They live in this environment in freedom and it is easy to meet them along the various trekking routes that cross the tropical vegetation It is certainly a suggestive experience, but since macaques can also be found in Japan and I have already seen this experience at Snow Monkey Park, I preferred to give priority to other points of interest.

I had saved the photo of this temple on Instagram, but then I totally forgot to include it in the itinerary! It is one of the oldest temples in Kaohsiung, consisting of several floors that can be visited and an expanse of red lanterns that can be photographed from the upper floors… one of the best Instagram spots in Tawian, too bad I missed it!

From Kaohsiung it is possible to make several excursions, such as the ancient capital Tainan, a city to explore by getting lost in its traditional alleys, expressing its temples and historic buildings. Absolutely not to be missed is the Anping Tree House, an abandoned former warehouse that has been literally englobed by a banyan tree.
On what to do in Tainan I wrote a dedicated post. 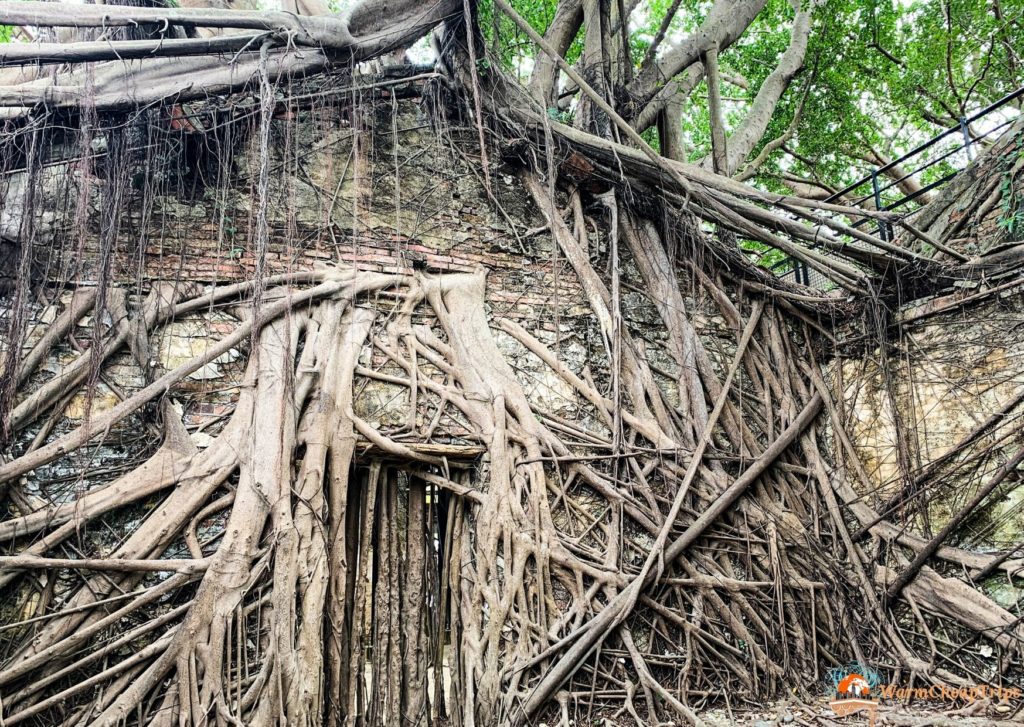 Getting in and around Kaohsiung

Kaohsiung is served by an international airport, connected to the city center by metro.

It’s also served by the high-speed railways that connects it to Taipei in a couple of hours, I recommend buying the ticket in advance on Klook with a small discount.

Is connected to the Kenting National Park by several buses, especially I recommend the convenient Kenting Express for which it is possible to buy the same day return ticket for 600 TWD.

In the city then you can move comfortably with public transport, metro, trains, and buses where you can always pay with the Easy Card a prepaid card to be passed on the turnstiles at the entrance and exit and that can be recharged either at the Seven-Eleven or at the machines in the station.
Google Maps works very well, so just enter the desired destination place and you will be shown precisely the options available.

Also remember to make a stop at Formosa Boulevard Station (you will surely pass by being central and the only station where the two main lines meet), where you can admire the Dome of Light. A stained-glass dome that entitled Formosa Boulevard as one of the most beautiful metro stations in the world…. personal opinion: the Toledo station in Naples and the various metro stations in St. Petersburg are much more incredible!