In the mountains of Gunma, at 1200 meters above sea level, there is Kusatsu Onsen, a famous onsen town which together with Gero and Arima is one of the three hottest springs of Japan.

Kusatsu Onsen is a very popular destination among the Japanese, but still little known by tourists, although was on my wish list for some pretty long time, after discovering it on Instagram for Yubatake, the particular water cooling system in the center of the town.

The thermal waters of Kusatsu spring at a temperature above 75°C, sometimes reaching even 95°C and before you can immerse yourself it is obviously necessary to lower the temperature.
These waters are rich in minerals such as sulfur, iron, potassium alum and sodium chloride, which makes this hotspring antibacterial and rich in beneficial properties for the body. It is said that even Ieyasu Tokugawa, Japan’s first shogun, asked to have brought the beneficial waters of Kusatsu to Tokyo!
Adding cold water would affect these qualities, so that’s why people searched ways to cool down water, such as the wooden tanks of the Yubatake or the Yumomi: shake the thermal waters with the wooden plates.

The main reason to visit Kusatsu Onsen is of course soak in the onsen, but note that in this onsen town it is also possible ski in winter and go trekking on the Shirane volcano reaching the Yugama crater lake with its particular intense blue color. Unfortunately, however, due to volcanic activity, there has been an alert ongoing in the last two years and is not possible to approach this lake. 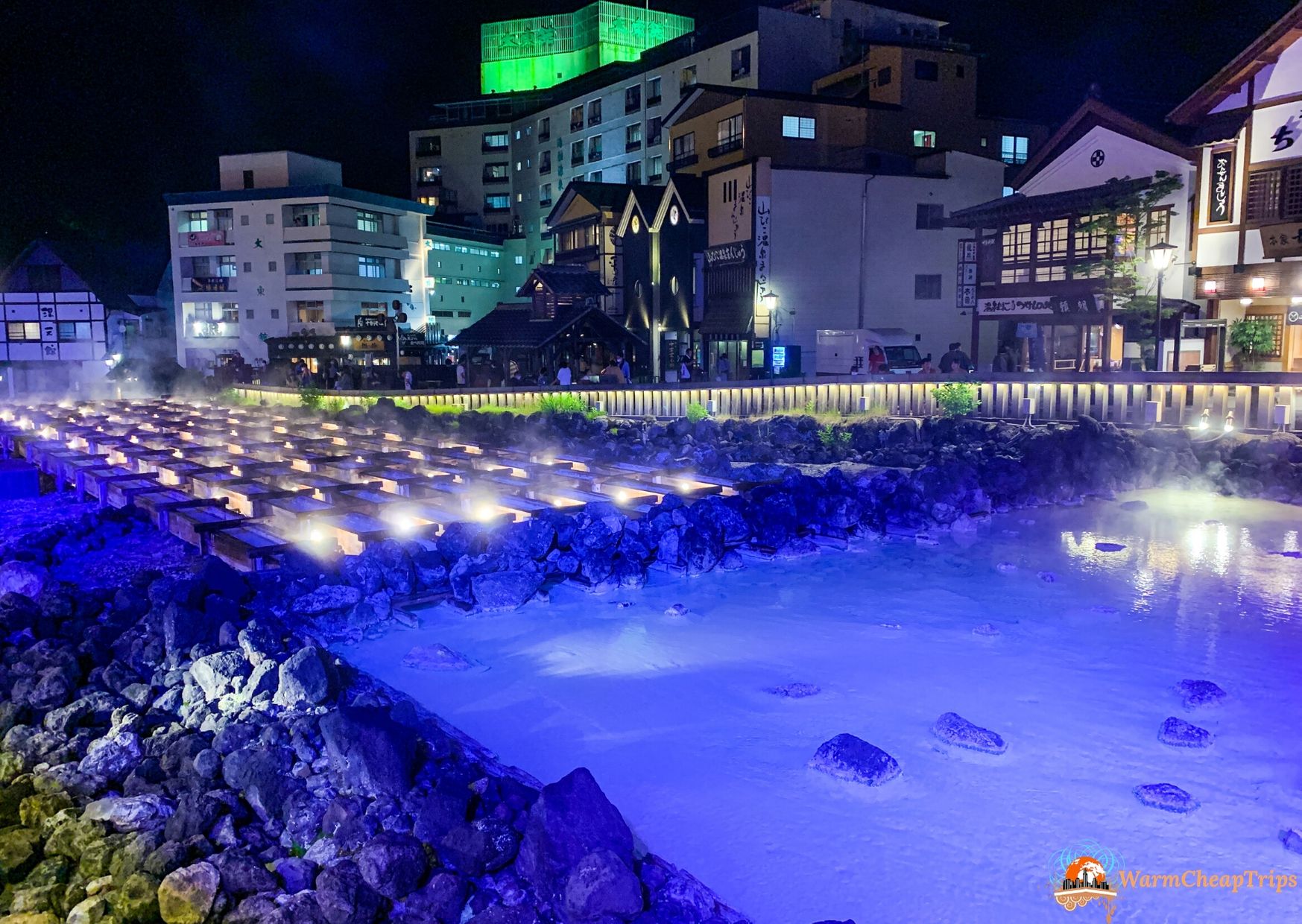 At the center of Kusatsu there is the Yubatake, a system of wooden tubs, the spring that releases the classic smell of sulfur. Here the water flows from the spring and passes through a system of wooden plates to be cooled down before being channeled towards the various ryokans and public toilets of the city. It is certainly an incredibly photogenic place and I recommend stopping to overnight in Kusatsu Onsen to admire the magic of the Yubatake even at night: the lights and the steam rising from the pools create a magical atmosphere!

Another method used to cool the thermal waters is the Yumomi, which is the use of wooden sweeps to move the water and to lower the temperature. Today it is possible to see the Yumomi at Netsu no Yu, a building right next to the Yubatake, where the performances can be seen 6 times a day, from 9.30 to 16.30.
The cost is 600 yen, but many ryokans distribute a 50 yen discount to their guests. Tickets are limited for each show and go on sale half an hour before the show starts. The performance lasts 30 minutes. 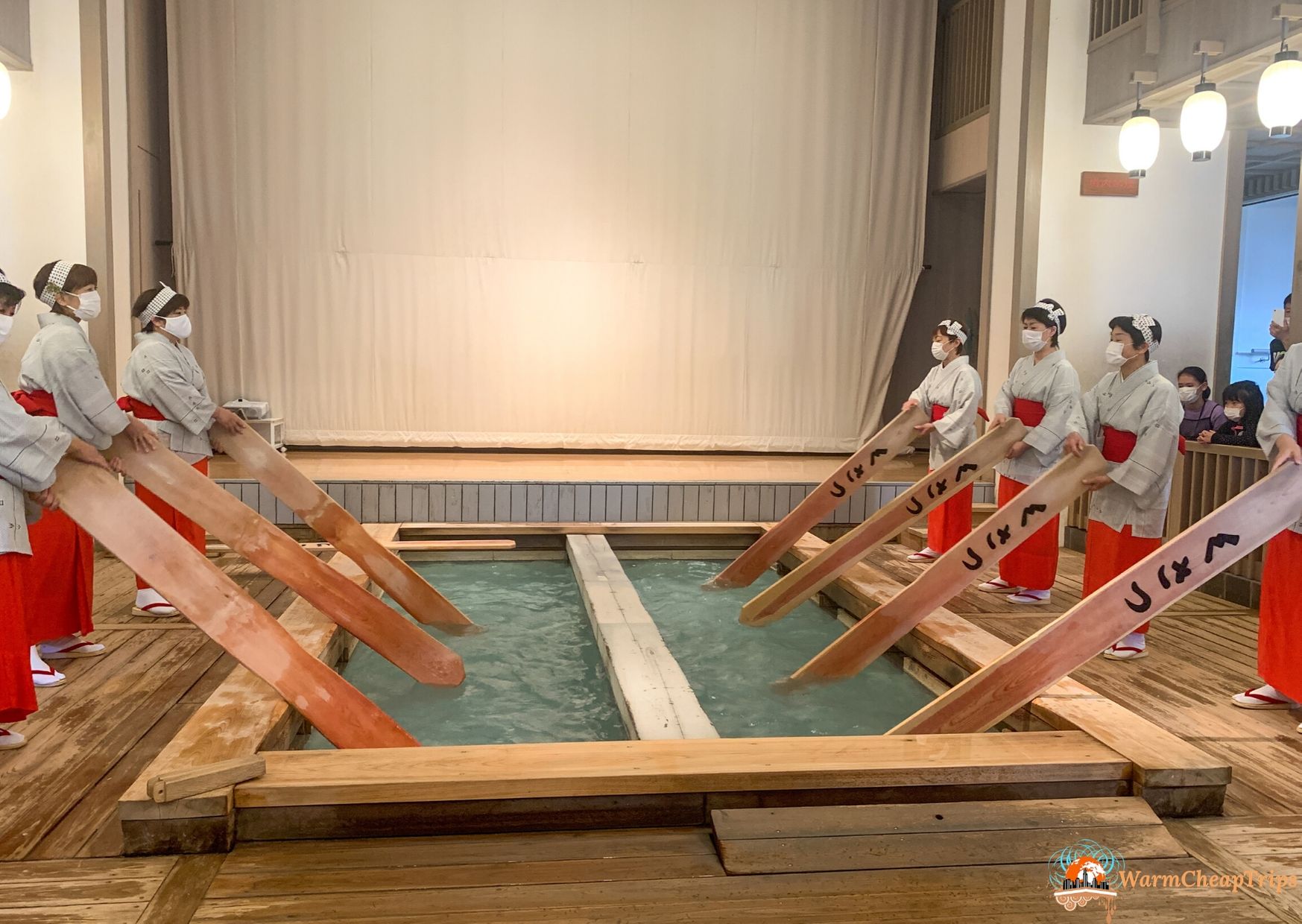 A short walk from the Yubatake will lead you to Sainokawara Park, a valley of volcanic rocks dotted with pools, lakes, and rivers where thermal water flows. There is a pedestrian path, but it is also possible to walk freely around the area and there are several foot baths where you can dip your feet. Here there is the largest outdoor onsen in Kusatsu, the Sainokawara Rotenburo, open from 7.00 to 20.00, 600 yen the entrance. Due to the location, it is particularly recommended during the autumn to admire the autumn colors and during the winter, surrounded by snow!

Usually one of the main activities in onsen towns is “onsen hopping” or try the various thermal bathhouses to enjoy the different types of thermal water or smiply to see the various environments. For this reason, you will see people walking around the town wearing a yukata so that it is easier to undress and dressed between one bath and another. You almost always find yukatas in Japanese rooms and geta are provided when you go out for a walk. Towels and washing items are generally available on-site or you can rent them for a few yen; you can also equip yourself with a small handbag.

In Kusatsu Onsen, other than Sainokawara Rotenburo, the other most renowned onsen are Goza no yu and Otaki no yu. There should be a pass, which can be purchased directly at the entrance of the three onsen, which allows you to access all three for 1,600 yen (instead of 2,100 yen for separate entrances).

There are also some free onsen, although much smaller and simpler, frequented mainly by locals, such as the Shirahata no yu right next to where they perform the Yumomii show.

Around the streets of Kusatsu you will also find several free foot baths, where you can sit on the edge of the bath and chat with your feet immersed in the thermal waters. 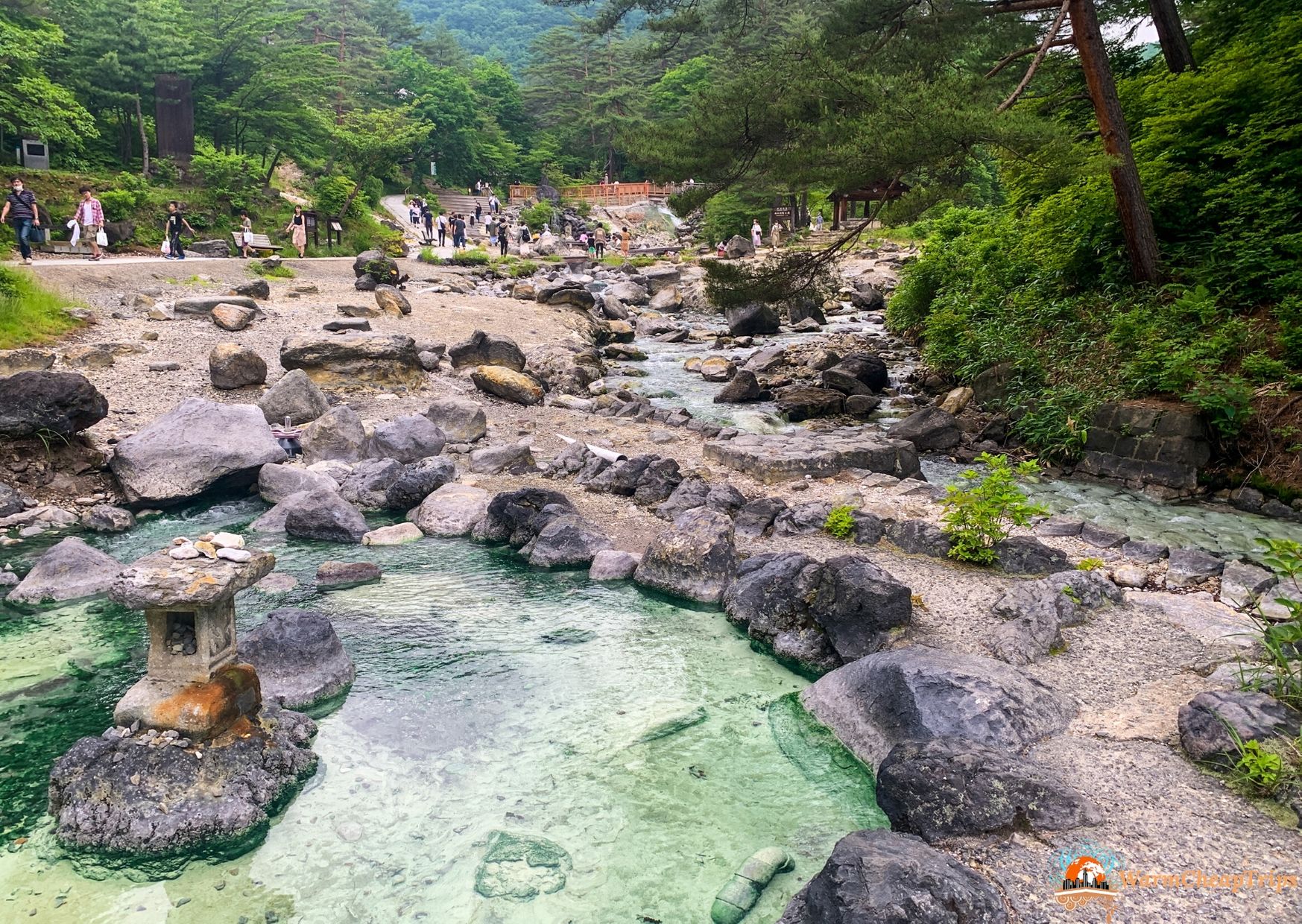 How to get to Kusatsu Onsen

If you don’t have the Japan Rail Pass or want to save money, buses are always the cheap alternative and from Shinjuku there are direct buses at a cost of 3,500 yen each way and they take about 4 hours.

There is no train station in Kusatsu, but you will need to take a bus from Naganohara-Kusatsuguchi or Karuizawa stations.
To reach Naganohara-Kusatsuguchi from Tokyo you can take the Limited Express Akagi direct train from Ueno, 5,370 yen, 2 and a half hours (but there are only 3 daily trips) or reach Takasaki (Shinkansen 4,810 yen covered by Japan Rail Pass, 45/50 minutes or Local Train 1,980 yen, just under two hours) and then from there, local Agatsuma line for an additional hour and a half and 1,200 yen.