Visiting the Hells of Beppu

Welcome to the Hells of Beppu.

Kannawa is a particular area of ​​the city of Beppu, a city born and developed thanks to geothermal energy ot this volcanic area.

In the island of Kyushu, the souther of the major islands of Japan, in a prefecture, Oita, that the inhabitants love to call “the Japanese Naples” for the more open and less austere character of the inhabitants, compared to the others Japanese. A prefecture where fresh fish is delicious, especially puffer fish!

Beppu is a city entirely devoted to thermal tourism, full of onsen, restaurants and places of leisure and perdition. It is not a city that has impressed me, it has very little of the traditional Japan that I love, it is totally different from the small castle town of Kitsuki from which it is just over half an hour by train. Beppu is a city for the Japanese tourist, who wants to come and relax and relax in the hotspring, which water reach 43°C, and jump from one onsen to another.

The hotsprings of Beppu are very different from the classic establishments I tried for example in Yudanaka: here the entrance costs only 100 yen, but there are no showers to wash before entering the bath nor there are soaps available.
You must bring everything you need to wash and you must cleanse before entering using the basins filled directly with the water of the main bath….

Let’s say that although Beppu is famous for being the onsen city, I recommend going elsewhere for hotsprings and visiting Beppu for its incredible hells. 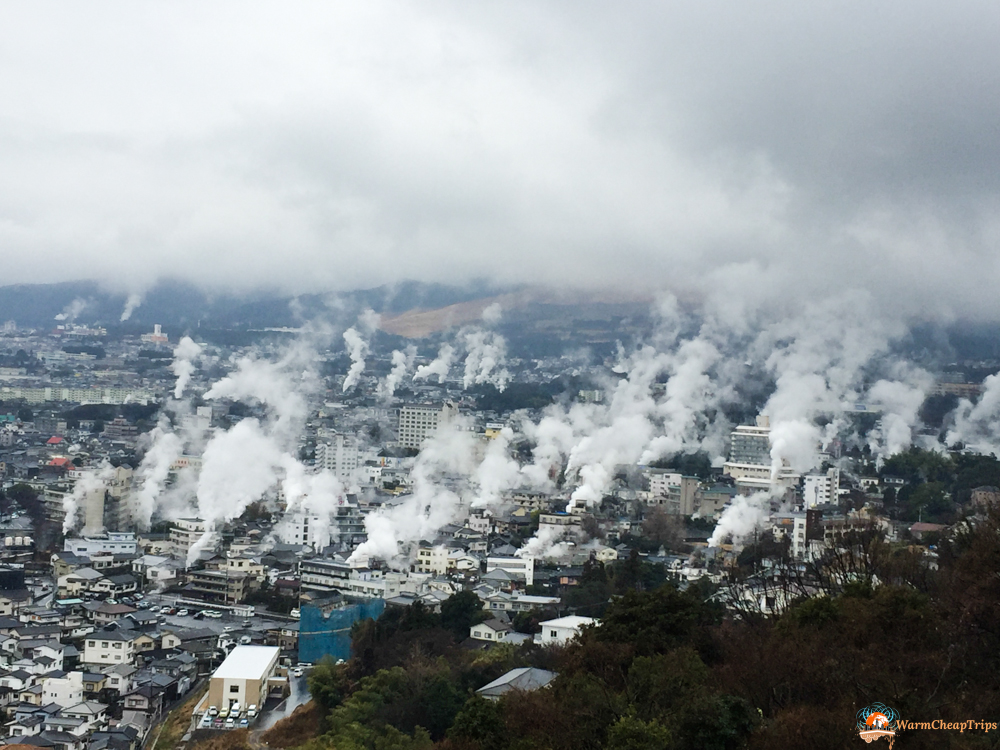 Hells of Beppu are something special, but it is the whole district of Kannawa that is so spectacular, with the fumes of heat coming over from the streets and the manholes, the smell of sulfur in the air and the humid heat of the vapors. The Hells of Beppu are natural onsen where the water reaches such high temperatures and every pond has its own different and unique characteristics.

Of course is not possible to enter in these onsen, they are just so interesting to see! In some of Hells of Beppu, however, you can try a free foot bath!

Hells of Beppu are seven, divided into two areas, both in the Kannawa district, just a few bus stops away one from each other. Personally I recommend to spend the whole day visiting the Beppu Jigoku and also include a visit to the Kifune-jo Castle, where you can enjoy a splendid view of the hill and its fumes.

Every hell requires an admission ticket, but the best solution is to buy the complete pass with the 7 tickets directly for 2000yen. All Hells of Beppu are open from 08.00 to 17.00 all days and the classic trip starts from the 5 “blue hells” and then move towards the two “red hells”. We choose to do the opposite lapto avoid the crow and to keep the best hell for memory image 😀

The seven hells of Beppu are:

A lake with a beautiful blue color, that remind a crystalline sea, born over 1200 years ago from the explosion of the Tsurumi volcano. Surrounded by beautiful vegetation, tropical palms and a small Shinto temple, it is listed among the National Sites of Scenic Beauty. Of incredible beauty, its waters reach a temperature of 98ºC !! Here there is also a large gift shop and a café, overlooking the sea hell. 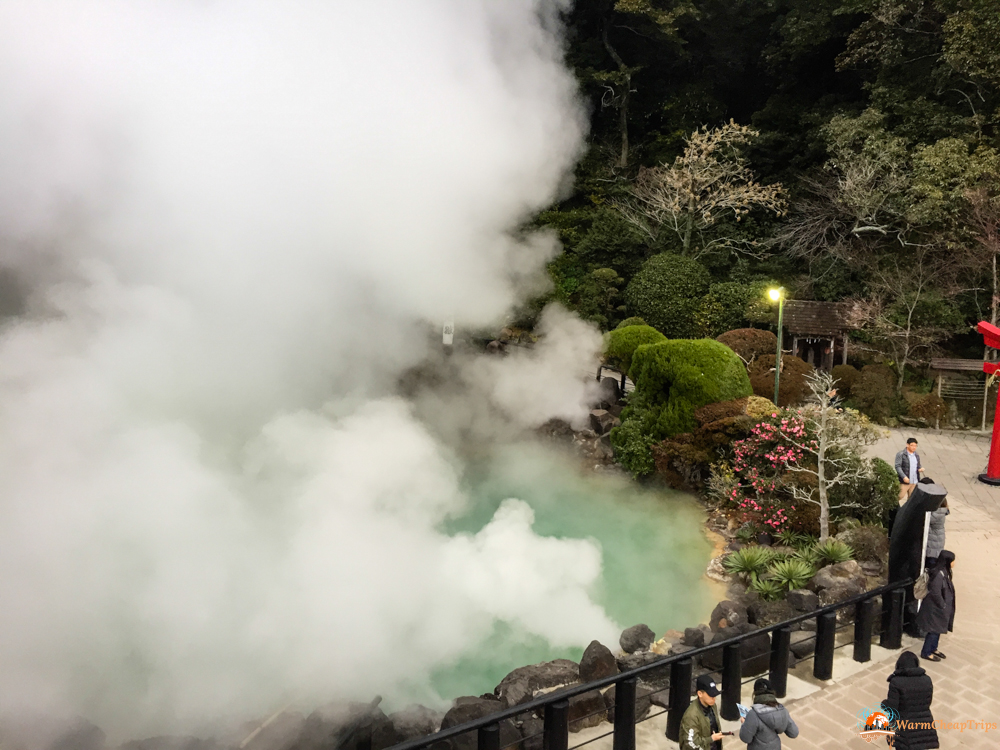 This hell is all a bubbling of bubbles in muddy puddles that create a hypnotic effect: the bubble forms, swells and explodes creating concentric circles around the bubble, thus reminding the shaven heads of the monks (Onishii). This was one of the hells I preferred, I could stay hours and hours watching those mud bubbles form and burst! 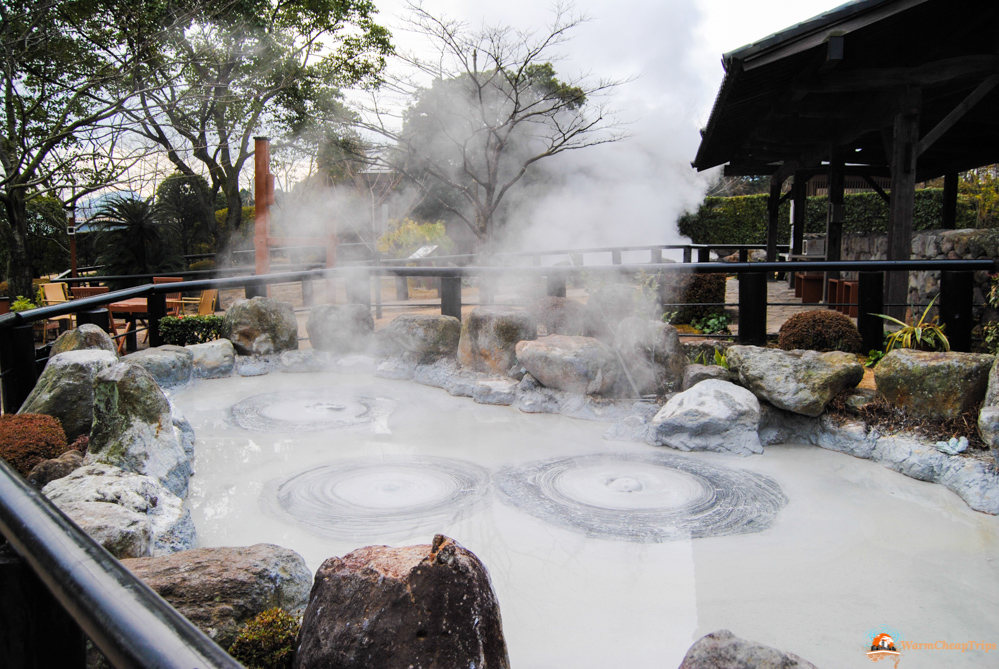 In the hell of Kamado, you can see and try out the various uses of geothermal energy in the city of Beppu, all under the watchful eye of the statue of the great demon protector!
It ‘s the most folk hell, where you can taste the boiling water that flows naturally and is used to prepare tea, try to walk on the “floor heating” that exploits the underground steam, and can follow some tour (in Japanese) that show how with using a cigarette in some places, magical steam whirls are registered. At the end of the route, you can buy various foods cooked by the steam of hell while you rest your feet in the hot foot bath….

Also called the hell of crocodiles, it is not the place most loved by animal rights …. Here in 1923 were brought the first crocodiles breeding. Apparently, although in captivity, the crocodiles found the high temperature of the water pleasant and soon multiplied. Today there are more than 100, separate in tanks, although most are located in the large central tank, where it is not rare to see some crocodiles claim his supremacy on the other… scary!

The white hell. I this hell very quiet, without too many tourists, probably more attracted by the particularities of the other hells to devote enough attention to this graceful onsen with clear waters. It is a small pond, surrounded by a classical Japanese vegetation and a wooden gazebo to sit and contemplate the vapors rich in sodium and boric acid. If you suffer from acne or conjunctivitis, let yourself be caressed by the heat fumes of this hell, your chorus will appreciate! Here is also a small exhibition of tropical fish and piraña. 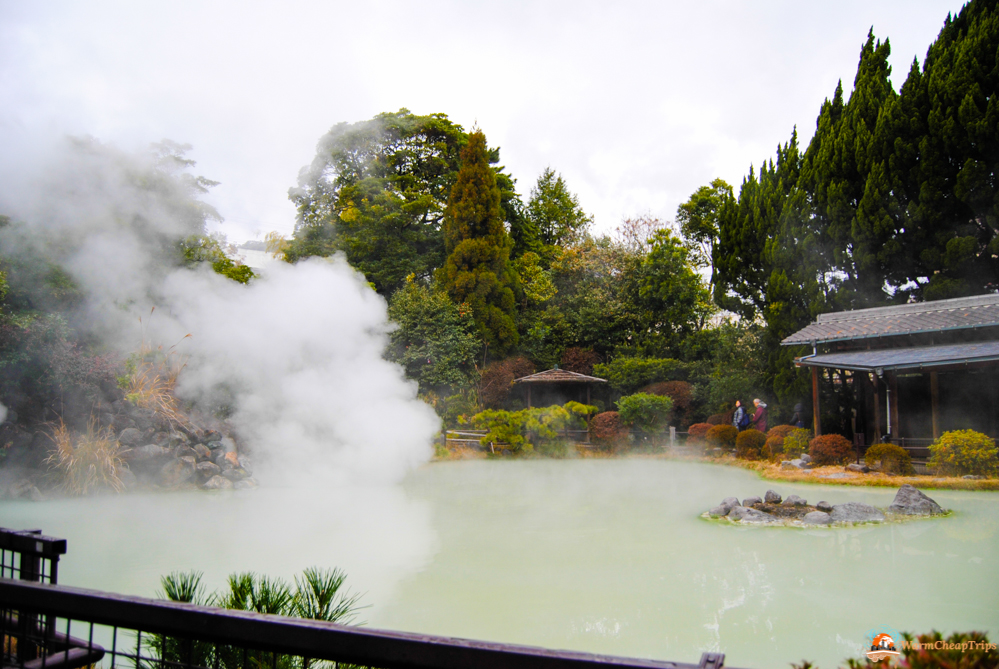 We move now to just under 3km, in the area of ​​red hells that owes its name to the intense color of this hell. The clay soil of this onsen gives this particular color to its dense waters, which reach a temperature of 78ºC. Being rich in clay, there are many creams and skin wraps that are produced here and that can be purchased in the large souvenir shop at the entrance to this hell. 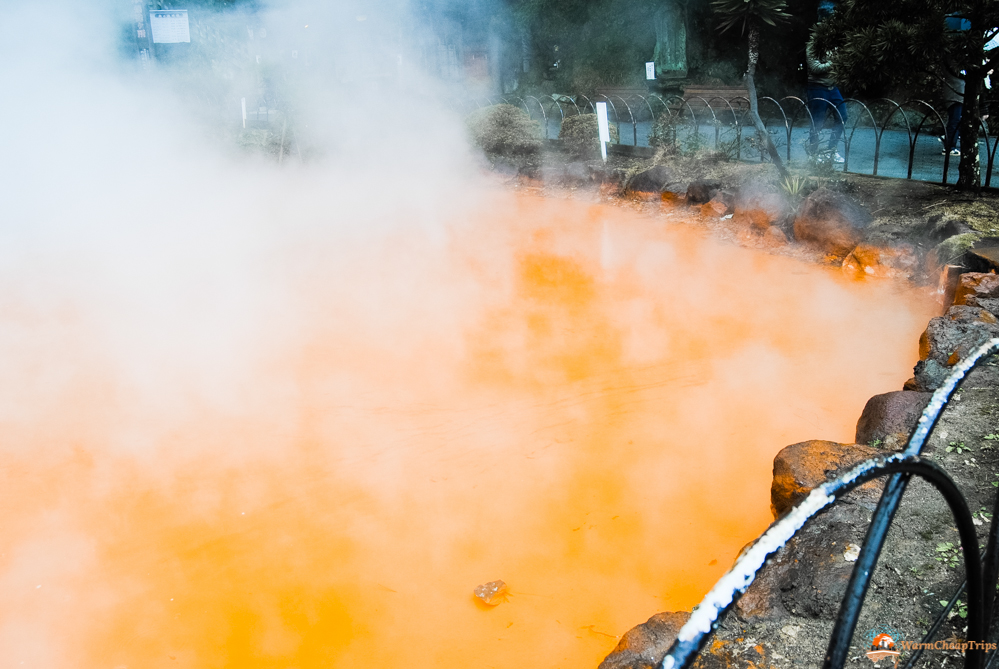 The last hell is not a pond of water, but a geyser that activates itself at quite regular intervals. For security reasons he was “locked up” in a semi-raid that blocks the height of the jet, but it is still an emotion to admire it, especially for people like me who have never visited Iceland, American parks or have never seen this kind of natural phenomenon. The peculiarity of this geyser is then the “recharge speed“, every 30/40 minutes more or less the geyser start again for about ten minutes (of course the timing depending on the atmospheric conditions), making it one of the most particular geysers in the world.

Between the blue hells and the red hells, going down to the Kifunejo Iriguchi bus stop and walk the hill for a few minutes, you reach this small modern castle (built in 1957) from which you can enjoy a splendid view of Kannawa hill and its vapors , but also on the city of Beppu and the coast. The entrance costs 200 yen and if you are lucky you can meet the White Snake, the guardian spirit of the Castle that is said to bring good luck and health to those who touch it. On the top floor of the castle there is also a small altar with vases containing the three predecessors of the current snake. 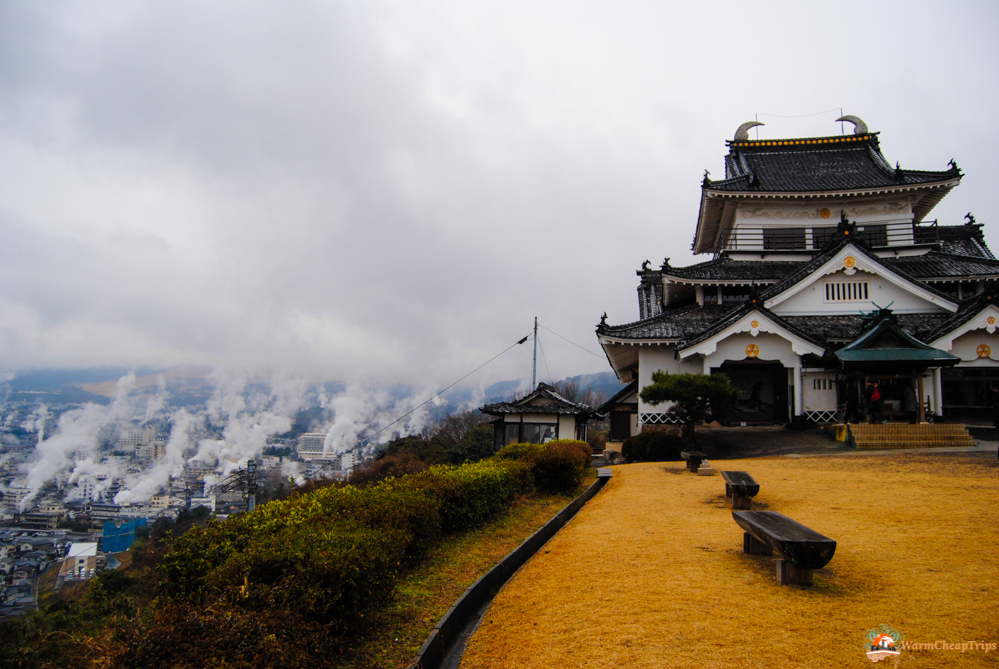 Beppu is served by Shinkansen and you can use the Japan Rail Pass. If you arrive in Kyushu by plane, from the Oita National Airport, there is a Limousine Bus service that takes you to Beppu Station in just over an hour.

From the station of Beppu you can then reach Kannawa by bus, the cost of the ride varies depending on the distance, but you should take the daily pass for 900yen. Together with the pass, which can be purchased at the station information office, you will also receive the timetable for that day and will show you all the buses that lead to the hells.