Sarushima literally means “Monkey Island“, but actually in this uninhabited island one hour and a half from Tokyo, no monkeys live. Nor have they ever lived there.

So why this beautiful island that in summer is a great solution for a sea escape from Tokyo, where do barbecue with friends has this name? Well, because a legend tells that during a strong storm that hid the near shore to the sight, a monk who was sailing towards Enoshima lost his way and a white monkey led him to this island, where he could wait the end of the stormbefore returning to sail.
So, this uninhabited island in Tokyo Bay, less than 2 km away from the coast of Yokosuka, took the name of Sarushima.

Sarushima is the only completely uninhabited island of Tokyo Bay and it is not  possible to stay overnight.
In summer it’s a popular destination for spending a day at the beach, where have barbecue with your friends and fish or swim in the water.

But Sarushima is not an excursion from Tokyo perfect only for organize a barbecue with friends, but also to discover an island full of nature with ancient remains of fortifications.
Actually, on the island, in the Nichiren cave, which according to the legend gave refuge to the monk led here by the white monkey, were found remains of  Jomon Era, some of which can now be seen in the small information center near the beach. 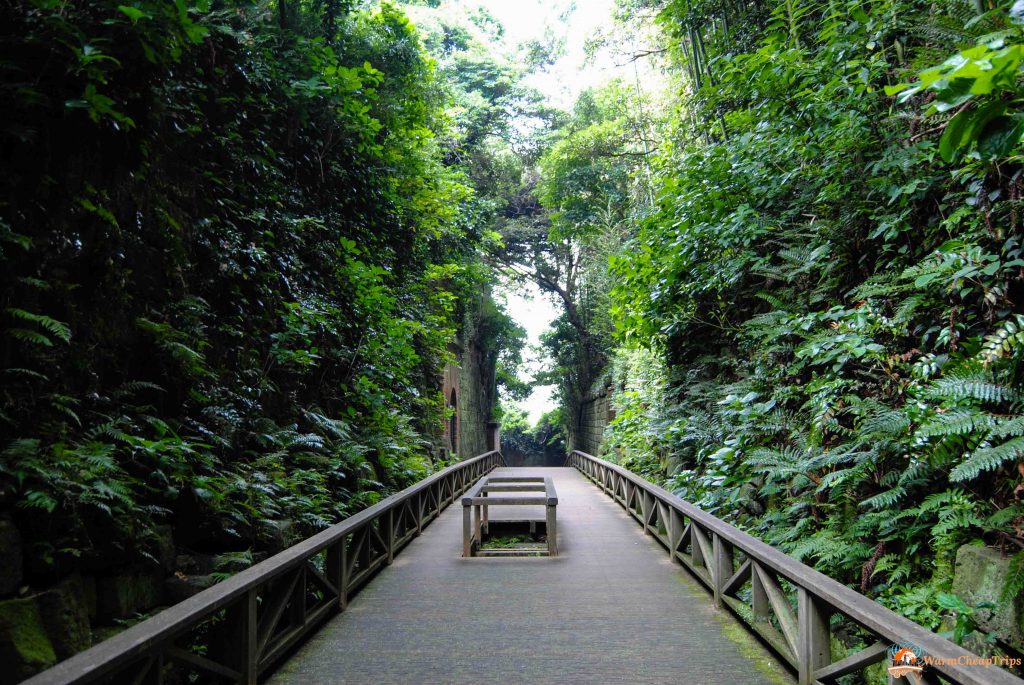 The island of Sarushima is not just a trip from Tokyo suitable for those who love the sea in the summer months, it’s also an excellent excursion throughout the whole year for history buffs, fascinating places with a mysterious atmosphere like Tomb Raider and of wild nature in general.
The inland of the island is crossed by paths through the remains of the ancient fortress in the jungle, which it is says has also inspired Miyazaki’s film “Laputa, the castle in the sky”, although I honestly do not find it so similar.

The uninhabited island of Sarushima assumed an important defensive role of Tokyo Bay against Commodore Perry’s ships. A French-style red bricks fortress was built here into the hill and forest and it wouldn’t be visible from the external. The path, which can be walked in about an hour, winds its way through these ancient walls and tunnels immersed in the forest, transporting the visitor to a magial world. 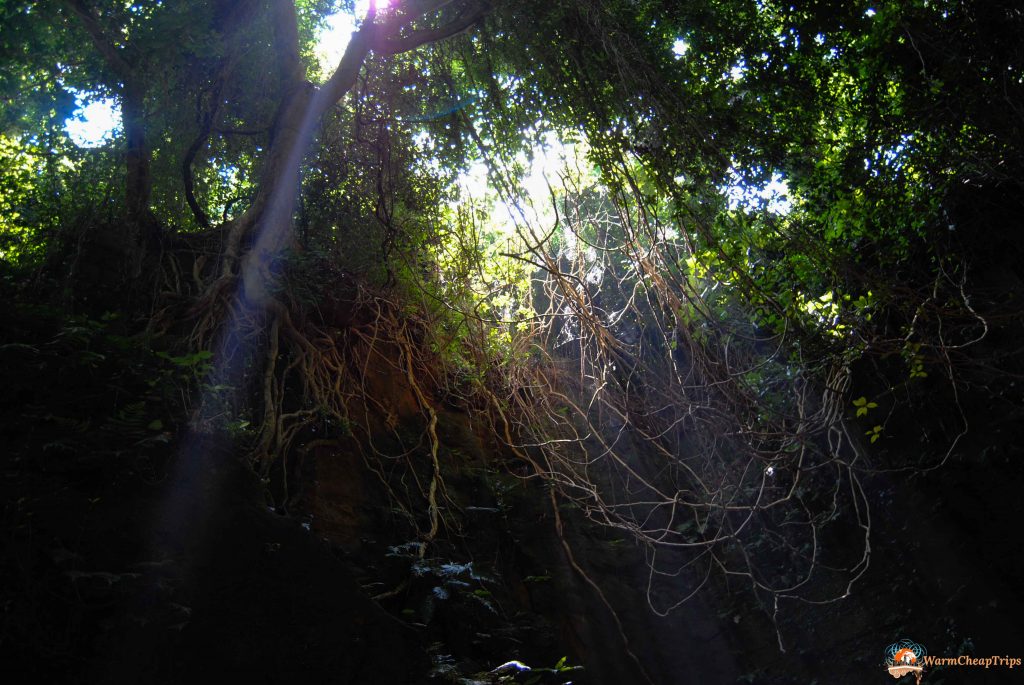 Afetr that, the fortress was abandoned and during the great Kanto earthquake of 1923 suffered considerable damage. Sarushima once again became a strategic point for the defense of Tokyo Bay during the Second World War, when it hosted the aircrafts, whose platforms are still visible today.

From the different observation points and especially from the observation tower (on which is not possible to climb), you have a wide view over the bay: not only the nearby Yokosuka, but also Yokohama, Kamakura, Tokyo and Chiba and during clear days you can even distinguish the slender shape of the Sky Tree and the imposing figure of Mount Fuji.

The path that crosses the island is wide and easily accessible, although in the middle of nature, with different steps and slopes in some parts of the island. It is however walkable without too much difficulty, but in case it is possible to borrow some sticks for free near the beginning of the route.
The entire exploration of the island’s interior paths takes about an hour and is largely under the shade of vegetation.
During the summer months, after the walk you can relax on the beach, diving into the water, in the dedicated area. There are no shaded spots, but you can rent a beach umbrella for 1500yen per day. If you want to do just a quick dive, you can rent a locker and store your backpacks there while you go for a swim.

Sarushima Beach is famous especially for the possibility of do barbecues on the beach, since here is possible to rent and buy everything needed for grilling, except the ingredients that must be purchased before arriving on the island. Especially on the weekends you will find the beach crowded with groups of friends intent on this hot activity, so if you want to stay on the beach more quiet, I recommend to avoid the weekend.
The sea isn’t stratospheric, but the water is quite clear even though the swimming beach is located in the sandy area of ​​the island. There are a few seaweeds on the bottom and the swimming space is bordered and you can’t swim outside, however this is a fairly standard thing for Japanese beaches.

Near the beach are the rental center, the small cafeteria serving hot dishes and cocktails, while upstairs are the lockers, the showers and a small shop selling souvenirs, bottled drinks and ice cream. Beware that these facilities are only open during summer season, the rest of the year you need to bring food and drinks by youself (there is only one automatic machine that I’m not sure is working in the other months, being that on the island there is electricity, if not the one produced by the generators used in July and August!) 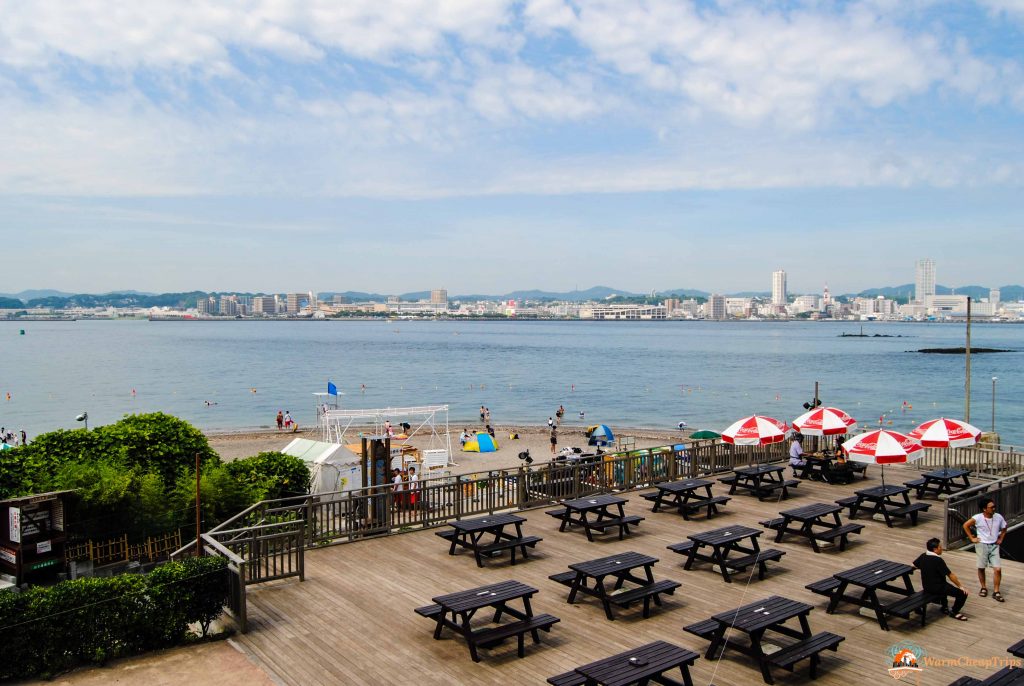 Hot to get there

The only way to get to Sarushima is by ferry in about 15 minutes from Mikasa Pier in Yokosuka. The return ticket costs 1300yen to which must be added 200yen of input contribution to the island. The ferry leaves every half hour from 8.30 (first departure from Yokosuka) at 17.00 (last return from Sarushima) in the summer months, while one an hour from 9.00 to 16.30 during the rest of the year.

The Mikasa Pier is located just outside the beautiful Mikasa Park where there is also the great ship-museum Mikasa, used in the Russo-Japanese war that we hope to return to visit soon, about a kilometer from Yokosuka stations.

At Yokosuka Station you can get there with the JR Yokosuka Line (included in the JR Pass) directly from Tokyo, in about an hour and a half or with the Keikyu Line changing to Shinagawa or Yokohama, you get to Yokosukacho station. This second option is slightly cheaper, recommended if you do not have the JR Pass or maybe you want to combine the excursion to Sarushima with Yokohama.