The cherry blossoms season, in Japan is something wait for the whole year. Starting from January, the forecasts on the dates of blooming begin to circulate, and the sakura fever is growing more and more.
Usually the cherry blossoms in Tokyo and Kyoto are around the end of March / beginning of April and as you can guess, visiting Japan during the blooming season is something really magic: walking under that cloud of pale pink, with some petal fluttering in the air pushed by the wind is perhaps the perfect representation of romance and elegance.
But cherry blossoms also represent the ephemeral beauty of life, that brief moment of immaculate beauty that ends at the moment of maximum splendor. Contemplate cherry blossoms is one of the favorite activities of the Japanese, since Samurai times: these men indeed were not only skilled warriors, but also smart people dedicated to meditation and Zen, well aware of how life could end at any moment, even during youth and in the period of maximum strength, just like a flower of cherry, which after blooming, falls down at the top of its beauty.
In Japan there are several types of cherry, with different shades of color, which bloom in different periods. The most widespread type, which blooms at the end of March and is considered for flowering forecasts, is Shomei Yoshino, but there are also species that bloom around late February, other later than classical one  and even one species blooms in winter! 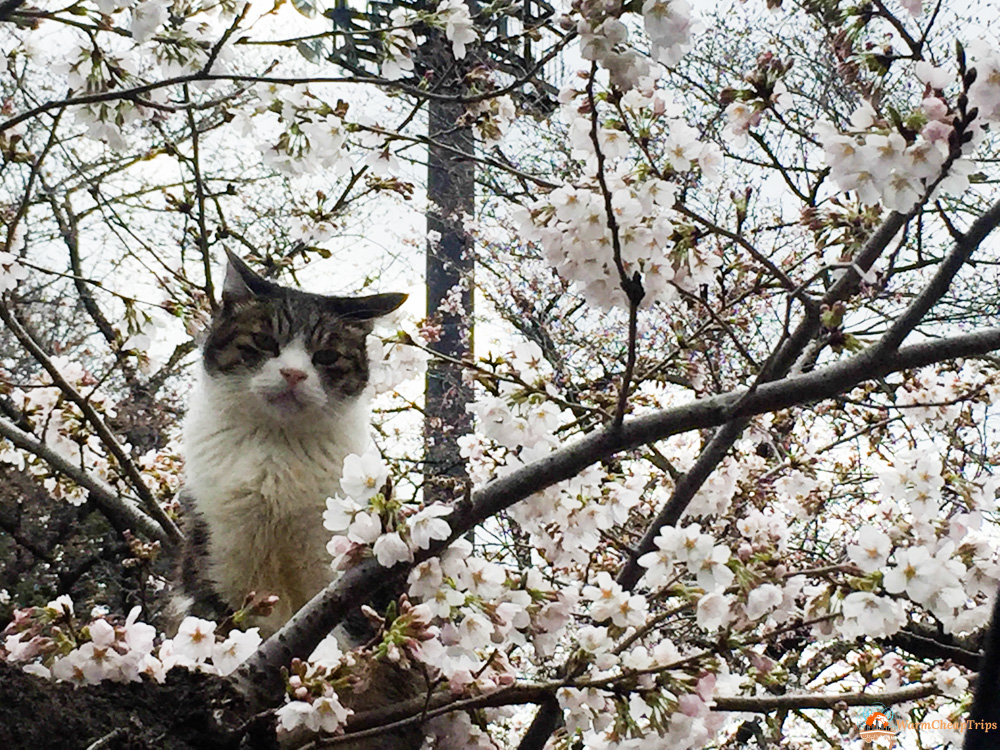 Doing hanami, admiring cherry blossoms, is still today one of most iconic activity of spring, but nowaday the silent meditation of the past times turnes into picnics and parties under the cherry blossoms tree. In Tokyo there are several places where you can admire the sakura and where do hanami, from the most popular parks, to the tranquil local areas, and don’t forget about the evening illuminations light up for the occasion. You can see cherry blossom in many place around Tokyo, including small local temples and many schools, but some places absolutely worth a and if you are in Tokyo during the Sakura season don’t miss the visit.

Right in the heart of Shinjuku, among the skyscrapers, the crowd and the neon lights, Shinjuku Gyoen is a peaceful oasi. A large park with different types of plants and blooms during the year, but also a pagoda and a couple of ponds. It is one of the best places for cherry blossom in Tokyo due to the presence of several types of chetty trees, thus covering a longer flowering period. The park is pretty huge and the cherry trees can be found everywhere, so it is also quite easy to find a good place to place your own hanami sheet. However, is not allowed to bring alcohol into the park and the closure is at 6.00 pm. A 500yen entrance ticket is required.

One of the classic spot for hanami under cherry blossoms in Tokyo is the Ueno Park. The largest park in Tokyo, which during weekends is visited mainly by families thanks also to the several museums and zoo with pandas, in spring it is filled with beautiful cherry trees along the main avenue and in different area of the park. Grass to sit on in reality is not very large, but along the sides of the tree avenue, is possible to place the sheet in the limitated area. If you want to see the sakura and at the same time the perfect organization of the Japanese, this is the place for you. And if you are not equipped with bento and delicacies, don’tt worry, there are many street-food stand typical of matsuri present throughout the cherry blossom season. 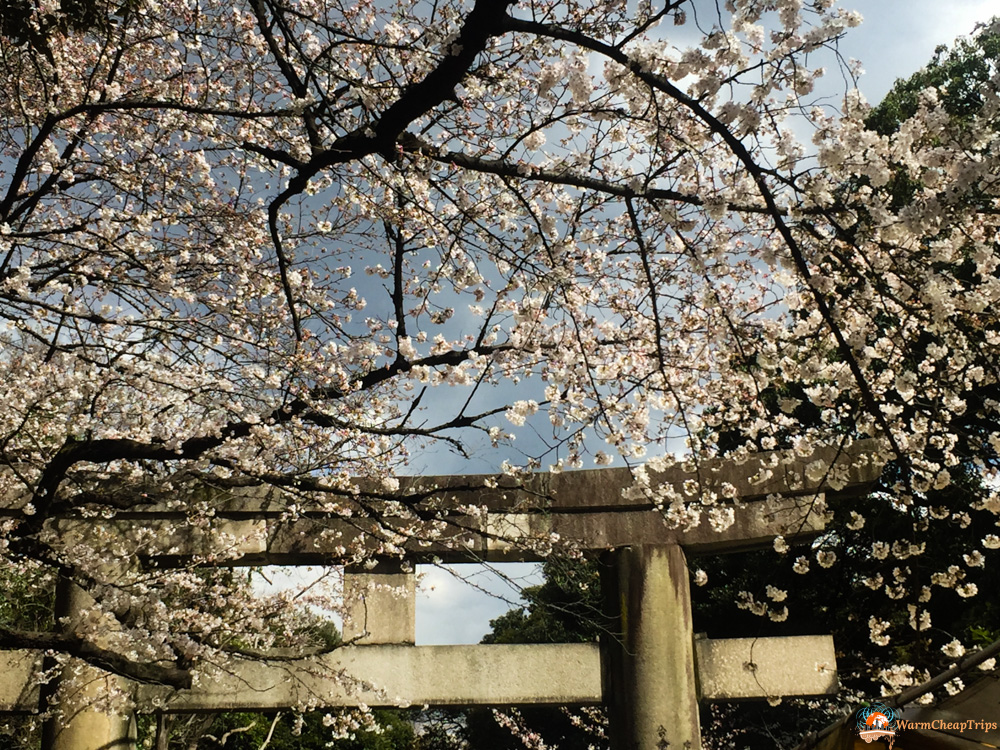 Another area full of beautiful sakura, ideal especially for a romantic walk, is along the Sumida River, near Asakusa. Here, among the pale pink of the cherry trees, you can see the futuristic Sky Tree that gives such beautiful postcard images. In addition to walking under the Sakura along the river, you can watch the cherry blossom taking a cruise on Sumida River and enjoy the glance of the white cloud from a different prospective. Also here, many stand and lanterns contribute to make the atmosphere magical.

Naka-Meguro is undoubtedly the best spot for cherry blossom in Tokyo, especially with evening illuminations. Have you ever seen the iconic photo of a river framed by beautiful pink cherry trees and the shimmering reflections of the lanterns? Here it is, that place really exists and is right near the station of Naka-Meguro, not far from the messy intersection of Shibuya. Unfortunately Naka-Meguro is so beautiful as crowded, so arm yourself with patience and be respectful of the lines, not stabd for a thousand thousand hours for a photograph and not jostled. If you respect the rules of Japan like all Japanese, you will be able to fully enjoy the magical atmosphere of the cherry blossoms in Naka-Meguro. Among other things in this area has just opened the largest Roastery Starbucks in the world, so I recommend combining the walk under the cherry trees in bloom to visit this unique shop. 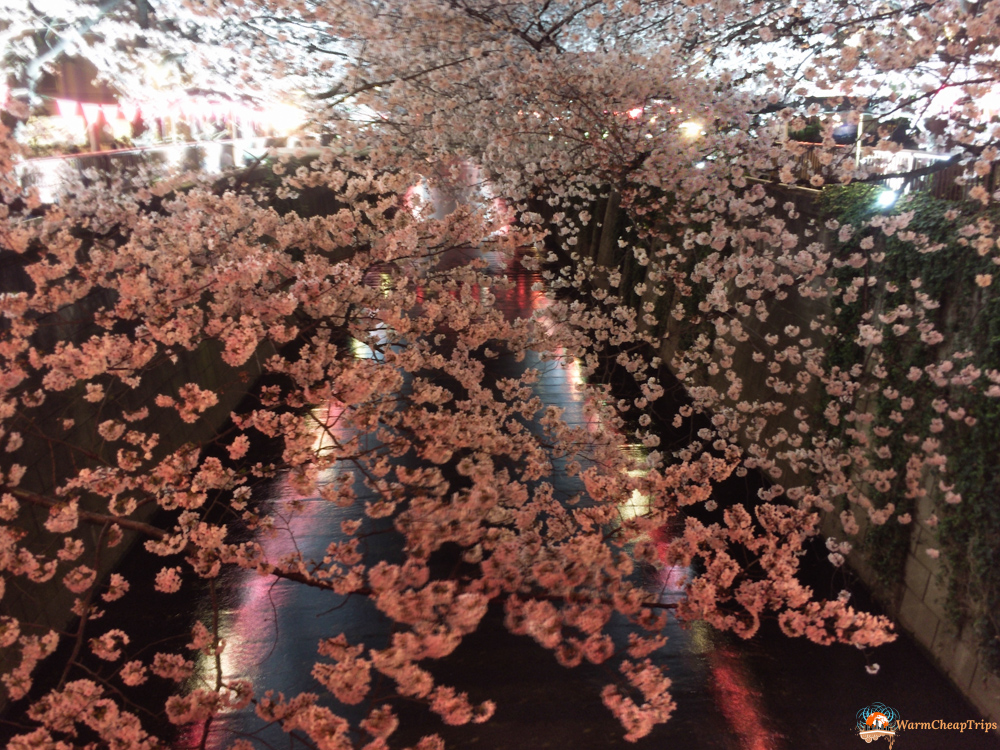 Also the Oriental Gardens of the Tokyo Imperial Palace host some sakura trees, but it is on the side of Chidorigafuchi that the enchantment of the cherry blossoms reaches its peak. A mirror of water surrounded by the pale pink cherry blossoms, where you can rent a rowboat for a romantic rendezvous surrounded by cherry blossoms. Even in Chidorigafuchi in the evening the sakura are lit and I recommend you come here to see the cherry blossom both during the day and after the sunset, it is absolutely worth it and in my opinion this is the best place to see sakura in Tokyo. In waiting time for the dark, take a visit to the nearby famous and often discussed Yasukuni Shrine, where one of the sample cherry trees is also monitored for flowering forecasts. Remember, however, that even if you are visiting Yasukuni to admire its cherry trees, it is a symbolic place for Japan, respectful. 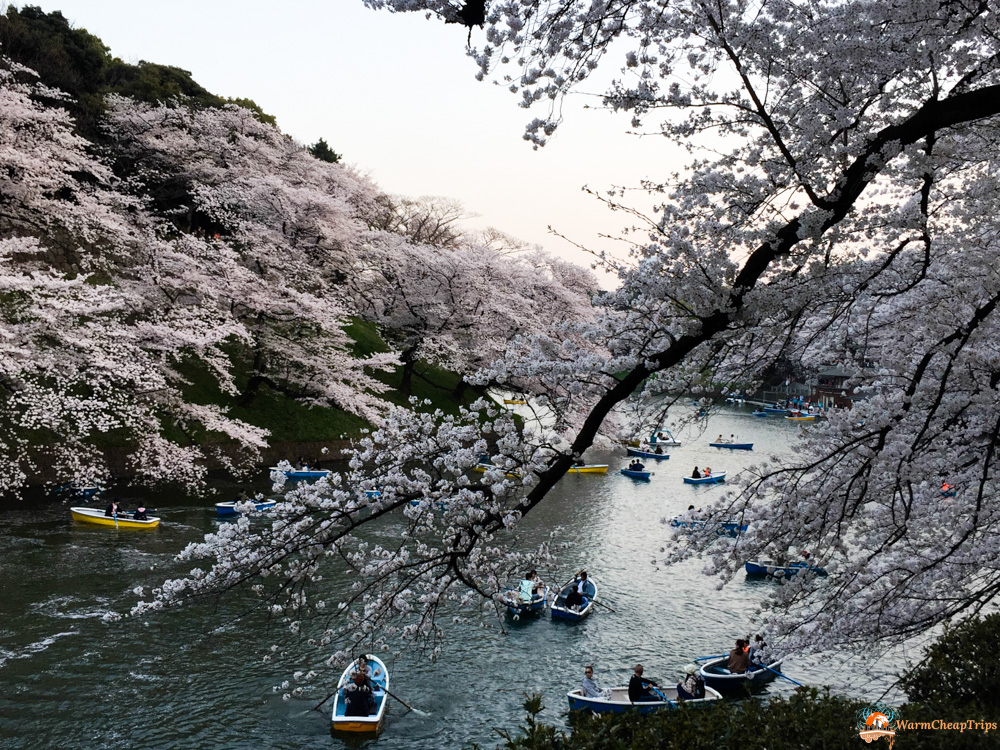 One of the most famous places for Hanami in Tokyo is the Yoyogi Park, thanks to its large grassy area, perfect for hanging picnic towels under the Sakura trees. Although the Yoyogi Park is one of the most popular places to do hanami, finding a good accommodation is quite simple, but in my opinion is not one of the most spectacular places to admire the cherry trees in Tokyo. However, being in a central area and being often included in the itineraries in Tokyo, I suggest you take a walk in the park.

A little outside the classic tourist routes, Inokashira Park is one of my favorite places to celebrate under the cherry blossoms. The atmosphere is similar to Chidorigafuchi, with the lake with boats and the cherry trees that surround it, but here everything is much more “light and informal” and there is enough space to set up your own picnic cloth surrounded by tranquility of a local park. Kichijoji then is a delightful area and inside the park there is also the Ghibli Museum, so if you are lucky enough to get tickets, the Ghibli Museum+ Hanami at Inokashira Park will create the perfect day!

Among the places listed, this is the only one where I have not been there personally. Or rather, I have been there several times, but never during cherry blossom, although it has often been suggested as one of the best places tfor sakura in Tokyo. The Japanese cemeteries are not at all gloomy places, indeed they are quiet places where walk in silence and admire the passing of the seasons. Along the main avenue that cross Yanaka Cemetery there are many cherry trees whose branches protrude above the road, creating a sort of pink tunnel, certainly suggestive and which I intend to visit absolutely during this blooming.

The cherry blossom are a fantastic, but unfortunately they last only a couple of weeks, and being linked to weather conditions, they could anticipate or delaying, mocking those who had planned their holiday in the classical period, between late March and early April. But not despair, because some types of late tree blossom later and although the glance is not the same, you can still enjoy the spectacle of flowering. Another alternative would be to hike in the Mount Fuji area, cooler than in Tokyo, or visit Tohoku and northern Japan. If you cannot wait until the end of March and want to see the cherry blossom earlier, a great place is the peninsula of Miura, about an hour south of Tokyo, where between late February and early March many Wazakura blooms, a type of early cherry with a deeper pink color.

Ikaho Onsen, for your body and your mind

Visiting the Hells of Beppu