Enoshima has been on my wishlist of places to visit for a long time, but for several reasons, I’ve always had to postpone.Then finally, on a beautiful summer day, I managed to organize this daytrip from Tokyo and visit Enoshima.
Enoshima is known for the beautiful view of Mount Fuji on clear days, but also for the shirasu, whitebait, small white fish that can be eaten in various ways (there is even the shirasu soft cream!).
Contenuti nascondi
1 The legend of Enoshima
2 What to do in Enoshima
2.1 Enoshima Shrine
2.2 Samuel Cocking Garden and Enoshima Sea Candle
2.3 Iwaya Caves
2.4 Love Bell
2.5 Enoshima beaches
2.6 Enoshima Island Spa
2.7 Other sightseeings in Enoshima
3 How to get to Enoshima
3.1 Condividi:

The legend of Enoshima

Although it is now a popular tourist destination with locals, especially in the summer season, in the Edo period Enoshima was a popular pilgrimage destination.
According to the legend, in ancient time, the area was inhabited by the terrible and cruel dragon Gozoryu. One day, after the area was devastated by a violent storm, a celestial maiden descended from the skies and just before she touched land, an island emerged from the depths of the sea. Thus it was that the island of Enoshima became the home of the goddess Benzaiten.
The fearsome dragon witnessed the scene and fell madly in love with the woman asking her to become his bride. Benzaiten, knowing the dragon’s past, only accepts to marry him only in exchange for the promise that Gozoryu had helped the area previously plagued by his torment. From that moment on, the dragon began to protect the area which thrived like never before.
Observing the hills of Kamakura and Enoshima it seems that they have the shape of the dragon, which even after its death continues to protect the area. 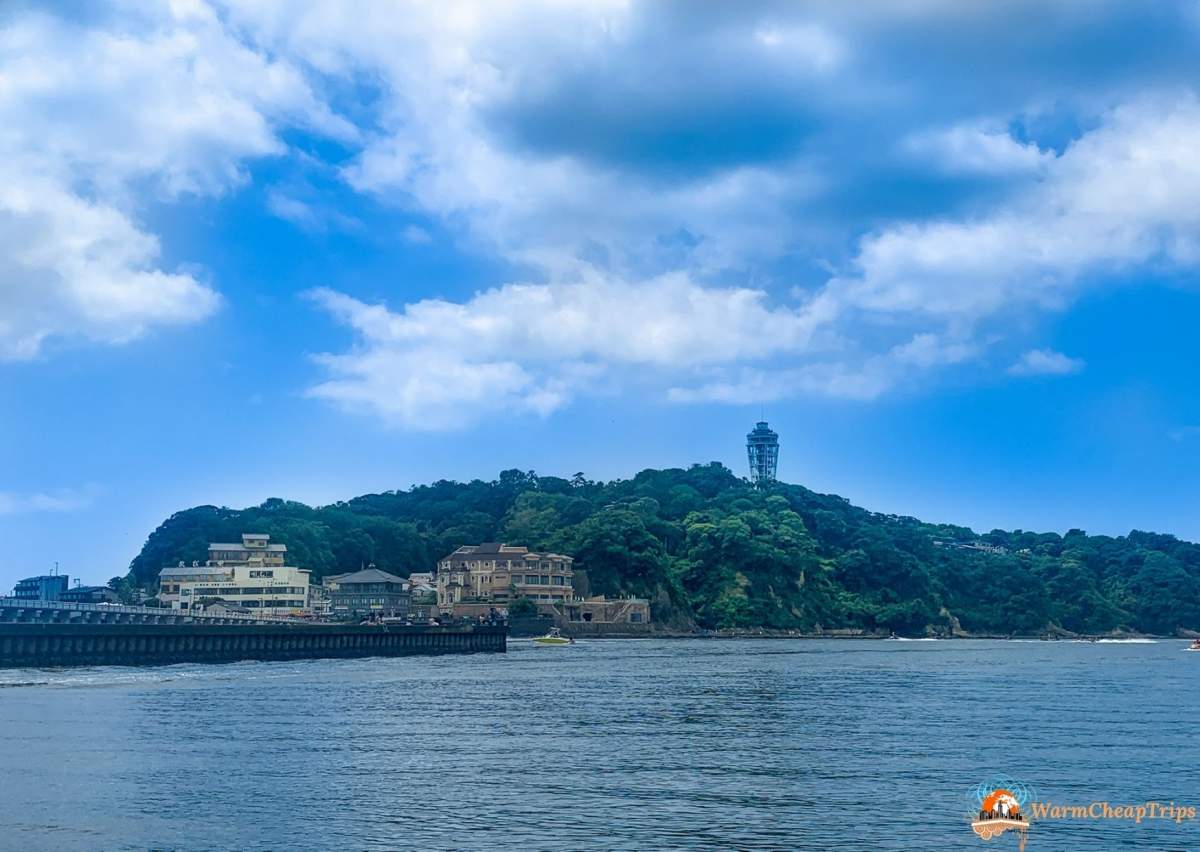 What to do in Enoshima

Enoshima is located a short distance from Kamakura, to which it’s connected by Enoden, a tram that passes between the houses and along the coast. Enoshima can be visited in half a day, so it’s often combined with Kamakura.
However, if you visit it in Summer you could also dedicate the whole day to Enoshima, stopping at the beach!

The island of Enoshima is connected to the mainland by the 600-meter bridge and at the weekend it is also possible to reach it by boat (400 yen).

Nakamise Dori is the central commercial street leading to Enoshima Temple, along which there are various restaurants and shops and is always very busy.
Here you can taste unusual dishes based on shirasu, but also tako-senbei, a kind of cracker made of crushed octopus!

Passing the Nakamise Dori, and climbing to the upper part of the island there is the complex of the three buildings of Enoshima Shrine. For the lazy people, it’s also possible to go up with the escalators included in the Enoshima Free Pass (1000 yen if purchased on-site). Originally the Enoshima Shrine was located in the Iwaya Cave, but it was not possible to access it with the heavy sea, it was then moved to the top of the hill, being divided into the three current buildings. One of Japan’s three most important Benzaiten statues is also found at the Enoshima Shrine and is visible for 200yen. 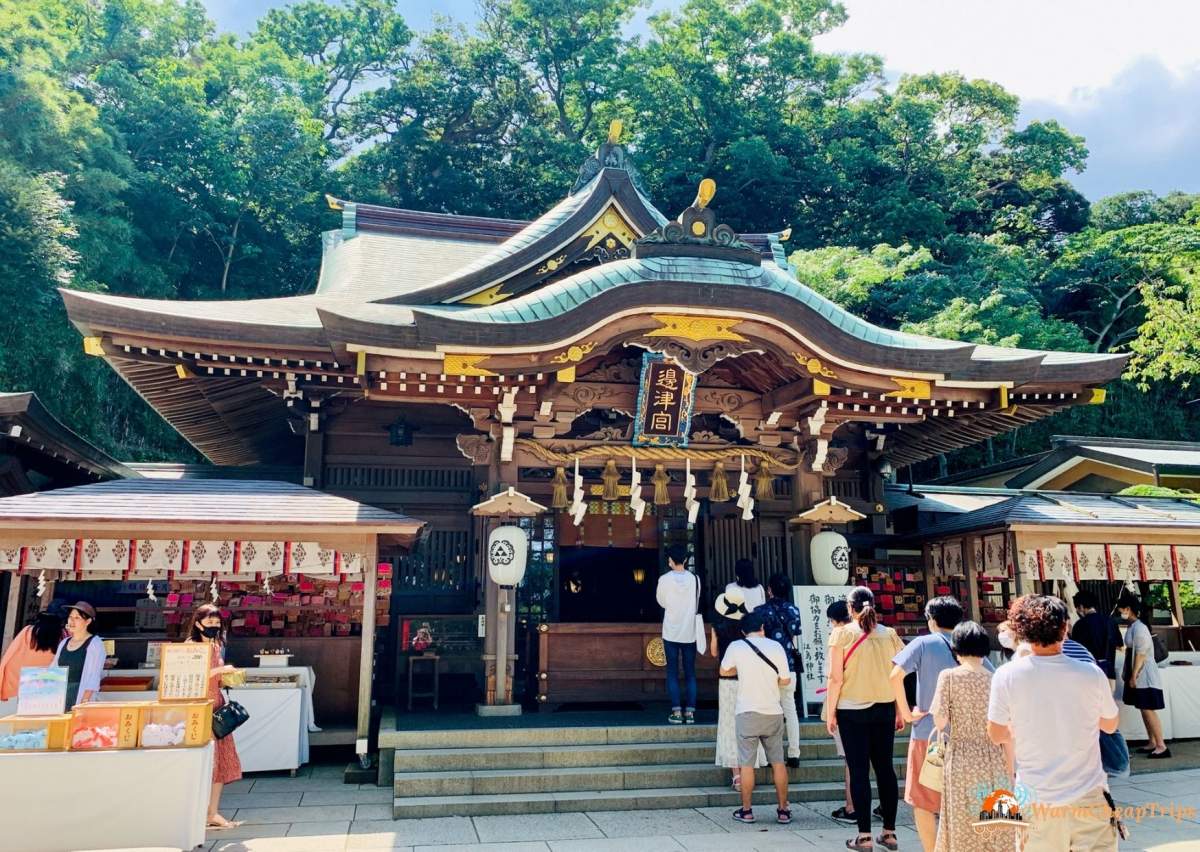 In the highest part of Enoshima Island is this botanical garden which owes its name to the English merchant who in 1880 bought part of the island and built his villa and this botanical garden for his collection of tropical plants. Here there is also a 60-meter observatory from which to admire the Shonan coast and from where, on clear days, you have a wonderful view of Mount Fuji.
Here, you can also admire seasonal illuminations, such as Christmas lights or lanterns in summer.
The entrance to the garden costs 200yen, the entrance to the Sea Candle additional 500yen, both included in the Enopass.

The Iwaya Caves are caves on the southern coast of the island. They have been naturally eroded by the tides and the force of the sea and are a mystical place, where the Enoshima Shrine was originally located and where according to legend the fearsome dragon lived. From here on clear days and at sunset you can see Mount Fuji. Among other things, it seems that one of the two caves is an underground connection to the Wind Cave, on the slopes of Mount Fuji!
Entrance to Enoshima’s Iwaya Caves costs 500 yen and is included in the Enoshima Free Pass.

Above the Iwaya Cave, is the “Hill of Love” of the legend of the Goddess and the Dragon. Here, overlooking the beautiful bay of Sagami, there is a bell. It is said that couples that ring this bell together will never break up. It is curious how there are several legends related to the goddess Benzaiten and love… here in Enoshima she guarantees happiness to couples, while in the Inokashira Park it seems to bring bad luck to the couples who rent the boat on the lake near the temple dedicated to her…

Enoshima is a very popular destination especially in the summer for its beaches. Of course, don’t expect crystal clear waters and tropical fish. Although Japan is an island surrounded by the sea, is not so easy find bathing beaches, so the beaches of Enoshima are an ideal destination for those who want to enjoy sea near Tokyo. This area is also great for surfing, especially Nishihama beach to the west side and Shichirigahama beach, going towards Kamakura.

If, on the other hand, you visit Enoshima in a season other than summer, since the island can be visited easily in half a day, you may decide to relax soaking in the onsen of Enoshima Island Spa, overlooking the ocean!
I have not yet had the opportunity to try this structure, but I will not fail to update the post as soon as I have the opportunity.

Other sightseeings in Enoshima

The coastal area of Enoshima also offers interesting corners in addition to the beaches.
First of all, the Enoden and its panoramic view that alternates views of the ocean with passages between the houses and the commercial street of Koshigoe. Shortly after Kamakura Kokomae station is the intersection with the level crossing made famous by the anime Slam Dunk.

A short distance from the Enoshima stations (Endoden, Odakyu and Monorail) is the Ryukoji Temple, the “temple of the dragon’s head” which is precisely where according to the legend, the head of the dragon is located and in mid-September is held an important festival. 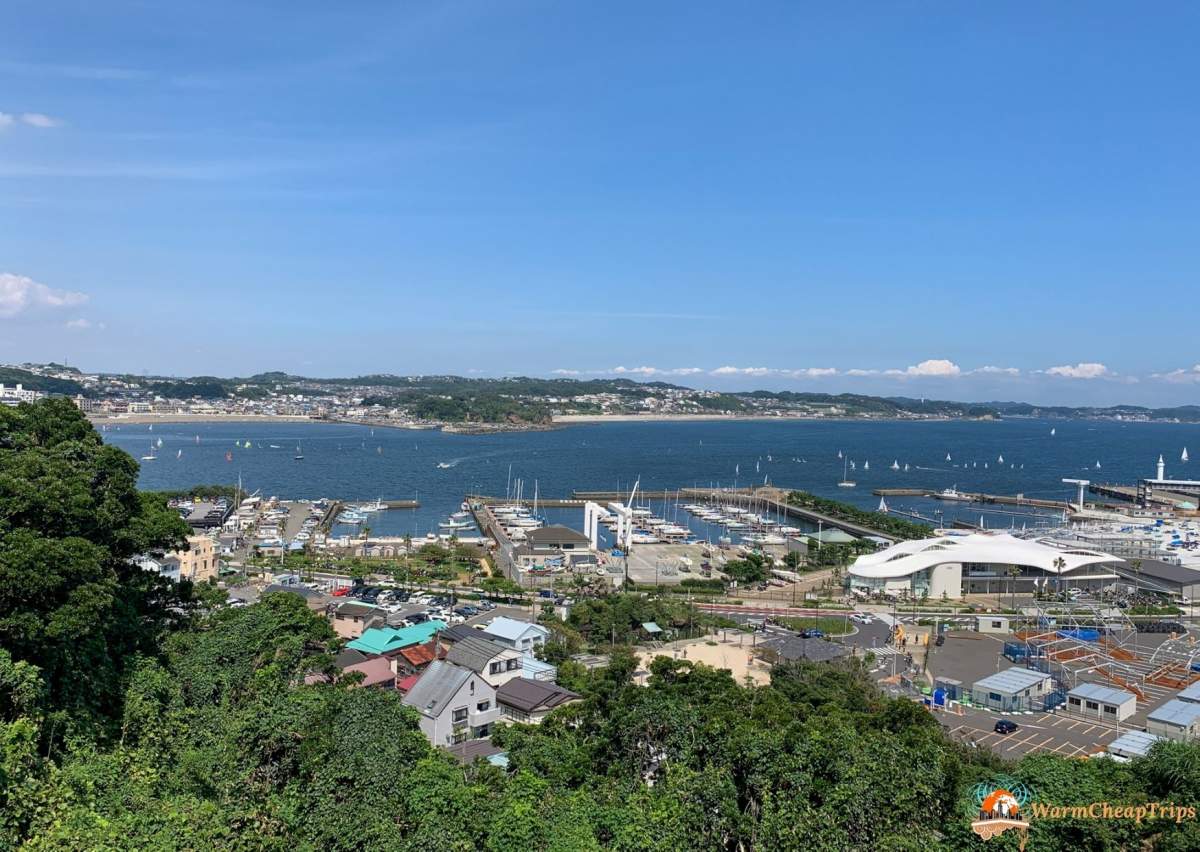 How to get to Enoshima

There are several ways to get to Enoshima. In my opinion, the most convenient way is to take the Odakyu line from Shinjuku, also buying the EnoPass for 1990yen which in addition to the entrance fees and some discounts, also includes the a/r train from Shinjuku.

Alternatively, you can use the JR trains to Fujisawa or Kamakura and then take the Enoden to Enoshima.
From Ofuna instead, you can take the Shonan Monorail, an interesting “suspended” train that passes over the inhabited centers! Not tried it yet, I’ll let you know as soon as possible if it’s worth it.

Relive the Battle of Kawanakajima