Pompeii and Herculaneum, two ancient cities with the same destiny, a destiny that made them immortal in history, blocked in time, as they appeared 2000 years ago, unique archaeological sites in the world.

Everyone should visit the Unesco Heritage Pompeii and Herculaneum at least once in their life: they are places of immense historical value, eternal places, fixed at a precise moment, and in a world in constant change are something absolutely unique. 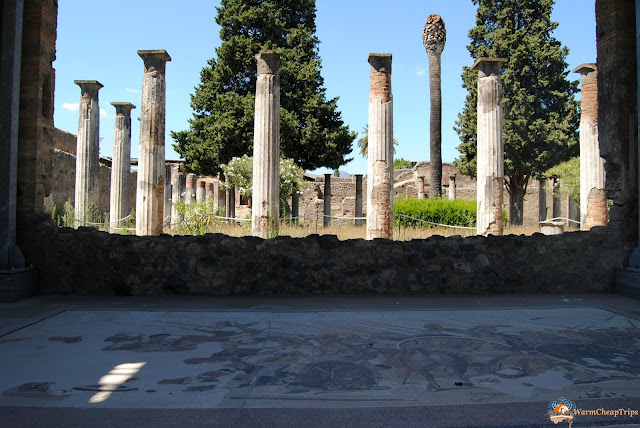 The eruption of Vesuvius and the cities of Pompeii and Herculaneum

The archaeological areas of Pompeii and Herculaneum are so important because they are ancient Roman cities that have come down to us exactly like this, as they appeared 2000 years ago.

The pyroclastic eruption of Mount Vesuvius in 79 AD completely submerged them, immortalizing them forever in history. That morning of August 24th Pompeii, Herculaneum and Stabia ceased to exist.
The great volcano that observed and accompanied the lives of the inhabitants of the area woke up.
A powerful and destructive awakening, announced by a series of earthquakes that heavily damaged houses, so much that at the time of eruption many buildings had not yet been repaired after the powerful earthquake of 72 AD and many residents moved away once the earth began to tremble in the days before the eruption.
First was a roar, then a black cloud and a shower of ash, lapilli and solidified magma. In the night the quiet seems to have returned and many people returned to their homes.
But at dawn on August 25th of 79 AD, the eruptive column collapsed completely and a column of gas and burning ash rose from the Vesuvius, pouring over the cities and submerging them completely. 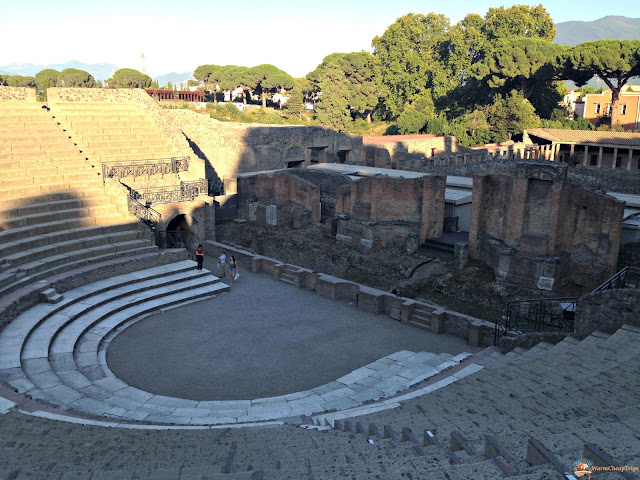 The ancient city of Pompeii became a “Roman city” in 89 BC and due to the fertility of the area and the mild climate, several Roman nobles moved here, making Pompeii a rich and prosperous city. There are many Roman Domus full of important paintings, large gardens and several rooms that we can see nowadays in the excavation area. Even the presence of a theater and an amphitheater show us how Pompeii was a entertainment city, with spaces for the recreation of its residents. There were also various spa, with a heating system in floor and walls, clearly visible in the well-preserved Terme del Foro.

The fulcrum of city life was the Forum, where political, religious and commercial life took place. The city square center has many shops, places of worship and wide space for political debates.
Even today, the Forum is one of the areas most loved by tourists, with the columns of the temple, the exhibits of the material found and the granaries.

If you enter from Porta Marina (the entrance closest to the station) this will be the first area you will encounter. Near here there is also the only restaurant area of the excavations, as well as the toilet and the infirmary. From the Forum I suggest you to go towards Via dell’Abbondanza, on the opposite side of the entrance, where there are many well-preserved houses, many of which have recently been restored and reopened thanks to the last funds allocated. In this area there are also the lupanare, the houses of pleasure of ancient Pompeii. 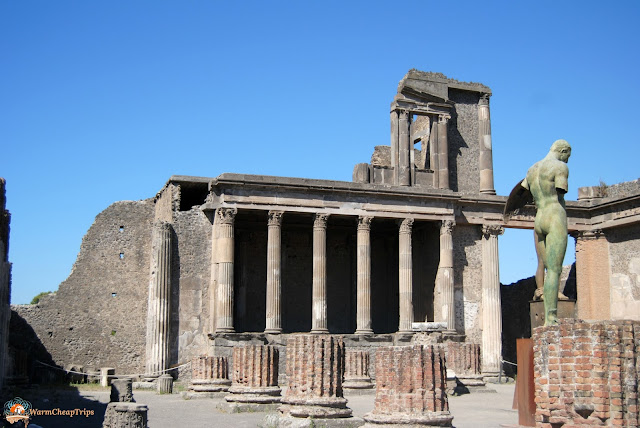 Still walking in the same direction, you will also come across the splendid theater and then you will arrive at the large amphitheater that can hold up to 5000 people, where the clashes between gladiators took place.
Visiting all the Pompeii excavations takes more than one day, so I reccomend you to decide the visiting route before entering, and in case skip some points indicated by the audioguide and give priority to the sites of your greatest interest.
I would certainly recommend visiting the well-preserved Terme del Foro with its magical atmosphere.
If you close your eyes you can almost hear the voices of the Pompeii, the warmth of the calidarium and the sounds of the water….

Moving away a little from the main excavation area, proceeding down Via Delle Tombe and passing the Necropolis, we arrive at Villa dei Misteri, a Domus about we don’t know so much, but is richly decorated with mysterious paint that have give its this appellation .
In addition to the buildings just mentioned, the most beautiful Domus to visit in Pompeii are certainly the House of Faun, with its double courtyard and a beautiful internal garden, the House of Venus in the Shell with its beautiful fresco and the orchard and the House of the Golden Cupids, with a splendid internal courtyard. This one  is often closed to the public, we have had the luck that an employee was here and together with a small group, he has allowed us to access. A beautiful Domus that I hope will be able to open to the public permanently.
Recently also the House of Vettii was reopened, one of the most famous doums of the excavations. Unfortunately when I was there it was still closed … one more reason to come back soon!

The visit to the excavations of Pompeii will occupy the entire day, I do not recommend combining it with Herculaneum in a single day..have to see little and badly, dedicated to Pompeii the right time that this huge area he deserves! 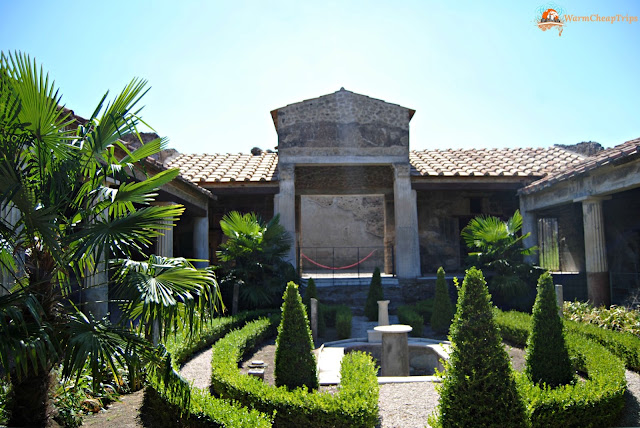 The excavations of Herculaneum are smaller, also because a good part of the ancient city is still under the current Herculaneum. The most intimate atmosphere will probably make you feel in another Era even more than in the streets of Pompeii.
In Herculaneum we have no casts, because it wasn’t covered with ash and lapilli, but it was literally submerged by a mudslide of more than 15 meters that incorporated and sealed everything. For this reason the buildings are better preserved and are almost totally intact, except for the collapsed roofs.
Anciente Herculaneum was mainly a holiday resort town, and we can understand it from the numerous villas watching ar the sea. Yes, because 2000 years ago the ground level was lower and the sea was much more inland than today. The water arrived exactly where now you can see the remittances of the boats full of skeletons of about 150 abitants, who have unsuccessfully tried to escape.
A gym, several spas, numerous taverns and shops can be visited, although the visitable area is only a small part of the original city. 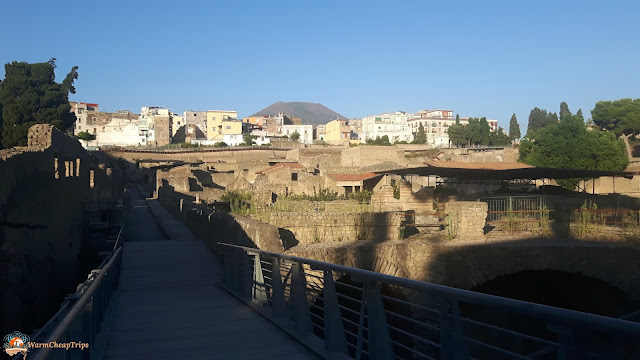 The very beautiful and particular thing of the archeological site of Herculaneum, is the view from above that can be enjoyed from the driveway, is a very suggestive image that makes good the idea of ​​the symmetrical construction of the city remains, based on the crossing of Cardi and Decumani.
The large and luxurious Villa dei Papiri, discovered by chance,  but which has given way to all the archaeological excavations in that area can be visited by appointment, by purchasing the entrance to the excavations of Herculaneum and without any surcharge. But on how to book the visit I couldnt’f find information, so we had to settle for virtual reproduction at MAV, the Virtual Archaeological Museum a few steps from the archeological site.
If by chance you were able to visit it, leave me a comment and I will update the article.
The visit to the archeological site of Herculaneum requires an abundant half day, we entered immediately after lunch (for 13.30) and we stayed there until closing time. 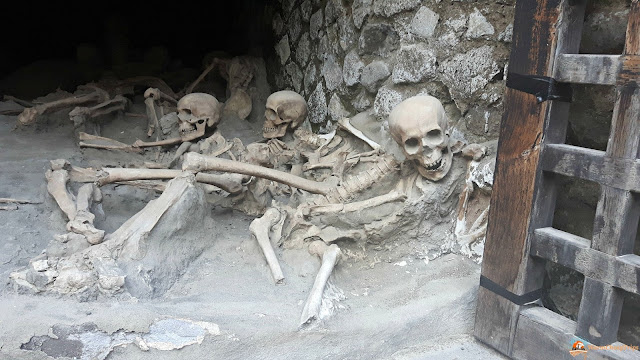 From Hercolaneum you can also walk on Volcano Vesuvius

Both archaeological sites are very interesting and I highly recommend renting an audio guide to receive many interesting basic information on what you are seeing and about life in 79 AD in the two cities.

If you want to deepen don’t t hesitate to contact the staff you meet there: they are all very prepared and helpful, I strongly recommend you to ask them information about the house you are visiting or even trivia about the excavations. Believe me, they will be thrilled to tell what they know and will reveal interesting information.

Unfortunately both in Pompeii and in Herculaneum, many houses are not accessible. Lack of funds, lack of personnel, structures not in security … the situation is like this for years, new funds are always allocated, but they are never enough because the work to be done to make safe, monitor and keep the areas in good condition archaeological is really titanic, so be patience if you cannot visit all the houses that you had put on the list.

In the two sites the shaded areas are limited, so remember to bring water with you: in Herculaneum there are no refreshment points inside the excavations, while in Pompeii there is only one, but there are some fountains of drinking water along the way.

Obviously the terrain is not suitable for heels (believe me, I have seen people with heels and wedges), wear suitable shoes to walk cobbled and dusty roads!

Mille Miglia, the amazing italian race between Brescia and Rome